The Mexico City Attorney General’s office determined that Minister Yasmin Esquivel did not steal her degree thesis, but Edgar Ulises Baez Gutierrez did, as she herself explained in a letter.

Mexico City, January 2 (however).– Edgar Ulysses Baez Gutierrezauthor of the thesis that allegedly plagiarized minister yasmin esquivel mossaHe acknowledged in a letter sent to his thesis advisor, teacher Martha Rodriguez OrtizWhat? took “various contexts and lessons” Esquivel Mossa’s thesis was being developed “because he needed to finish his degree quickly”.

in the document to which he had access AlthoughBaez Gutierrez “as opposed to telling the truth” revealed that he had “the opportunity to review and study various parts of the work of another student (current minister Yasmin Esquivel Mossa)” and indicated that “it is a fact that I was able to take up a significant portion of my work from 1985 to 1986”.

“I point out that my thesis advisor was teacher Martha Rodríguez Ortiz, at the time I remember the issue of unions being a relevant issue, so I went with my advisor who showed me a work that another student was doing on the same topic. , I took many references and lessons from that work because I needed to finish my degree quickly”, says the document signed by Baez Gutierrez on December 27, 2022.

And it ends: “To all legal and administrative effects the authorities of the University may have the above.” 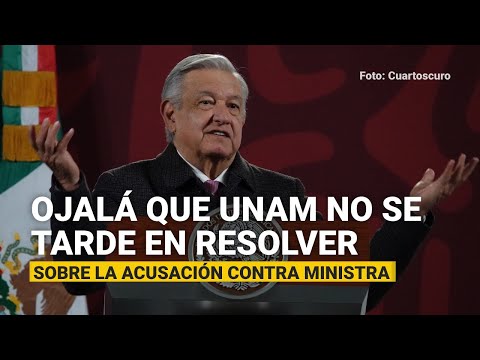 Journalist Alvaro Delgado went to the home of Edgar Ulises Baez Gutierrez on Monday, who did not want to talk more about the case nor be videotaped for health reasons.

This Monday it was announced that the Mexico City Attorney General’s Office determined that Yasmin Esquivel did not plagiarize her graduate thesis, but that Edgar Ulises Baez Gutierrez did, as stated in the letter.

The conclusion of the capital’s prosecutor’s office contradicts what was said by the National Autonomous University of Mexico (UNAM), which determined on Saturday that Minister Yasmin Esquivel’s thesis would not be original, as she argues, but rather the one she supported. it was done. In 1986, by Edgar Ulysses Baez Gutierrez.

Through a statement released on Saturday afternoon, the maximum house of study specified that the existence of plagiarism is clear, “based on a high level of coincidences”, which is more than 90 percent. The document is signed by the Rector of UNAM, Enrique Grau Wechters, on the last day of 2022.

The arguments presented by UNAM followed the receipt from the Directorate of the Faculty of Higher Studies (FES) of Aragon, of the minutes and communications of the Academic and Scientific Integrity Committee of that academic unit, “concerning” the alleged plagiarism of the professional thesis Which includes an alumnus who took his professional exams in 1987. Similarly, his public statement issued on December 30 was learned.

“Academic review of the contents of both theses, their publication dates, as well as the physical and digital archives of the university, lead us to believe that the original thesis was supported in 1986”, reads the second point of dissemination of UNAM.

Even though UNAM acknowledged that a few hours before starting its meeting, the Academic and Scientific Integrity Committee of FES Aragón received a notarized testimony, containing a letter from a person who supported his thesis in 1986, stating that He used various references, texts. And important aspects of the content of the thesis published later in 1987 were considered by UNAM to “collect additional information to deepen the documentary analysis and, if necessary, summon the parties involved”.

The day before, on Friday, December 30, Minister esquivel mossa Make sure the file containing your file degree thesis was from UNAM Modified December 22, 2022 “unfair and illegally“, and along with that, there are at least four other tests that prove that she is the original author of titling work”Ineffectiveness of unions in trusted employees of Article 123 Section A,

Through a statement posted on his social networks, Esquivel commented that he had taken various actions through competent channels to demonstrate that “the truth is on his side.”

“I respect institutions and their autonomy. For this reason, I have focused solely on presenting through institutional channels endless solid evidence that demonstrates that I am the original author of the thesis.Ineffectiveness of unions in trusted employees of Article 123 Section A‘, This confirms that I am the victim of plagiarism of the work, as I stated at the time”, reads the third paragraph of the document shared by the minister.

In 1986 Édgar Ulises Báez Gutiérrez was titled with the work “The ineffectiveness of the union of reliable workers of Article 123, section A of the Constitution”. A year later, the current minister graduated with similar work, as demonstrated by author and UNAM academic, Guillermo Sheridan. However, on 25 December, Esquivel Mousa shared a position in which he explained that he began writing and reviewing his degree work from 1985, a year before it was published by lawyer Edgar Ulises Gutierrez Baez.

It is now known that Báez Gutiérrez himself admitted that the thesis of Minister Esquivel Mossa was copied while it was in development.