The Delta Bets premium travel trend is here to stay 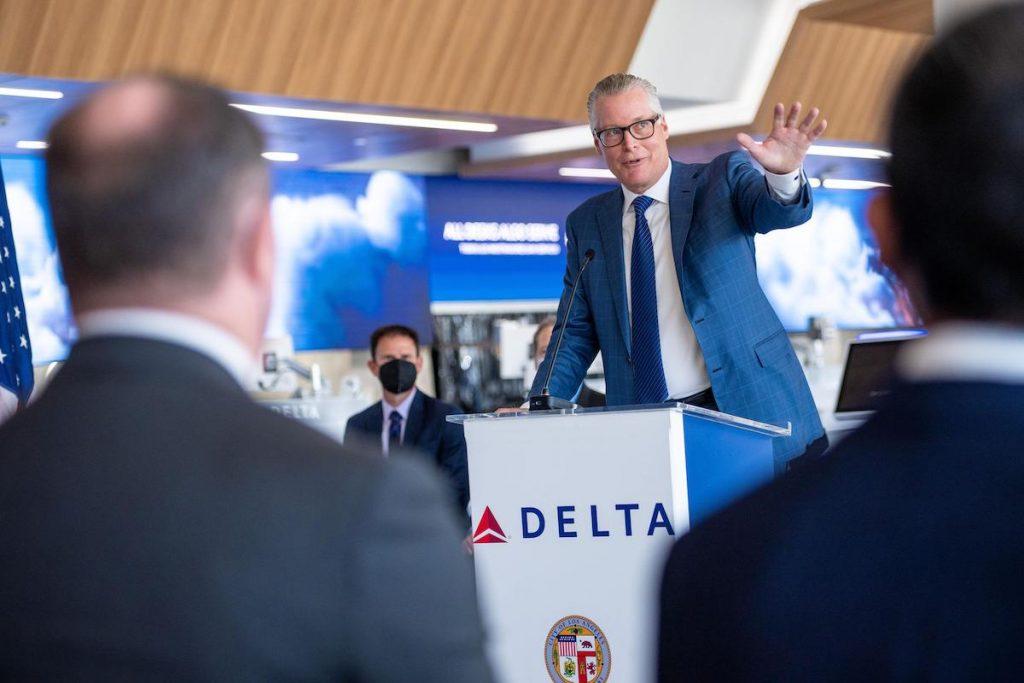 Delta Air Lines doesn’t think the pandemic is behind it, but it increasingly thinks that travelers will treat COVID-19 as a recurring seasonal illness. The airline believes this trend is reflected in how consumers are spending money now, shifting spending from retail to travel and experiences.

“Consumers haven’t been traveling for the past two years, so they’re prioritizing that spending now,” Delta CEO Ed Bastian told investors during the company’s first-quarter earnings call on April 13. “They’re looking for experiences.”

Bastian pointed to credit card data from Delta’s co-branded credit cards with American Express and increased spending on hotels and rental cars. During the depths of the pandemic, consumers redeployed the cash they spent on travel to home-improvements and other retail purchases. “You are seeing a significant shift in experience and services coming out of goods and retail,” he said. “And it’s not just the fact that people haven’t traveled, they’ve also saved money because they’ve accumulated some meaningful cash and discretionary income for what they’ve done over the years.”

Federal Reserve Bank data shows consumers in the US are sitting on $2.5 trillion more in savings than before the pandemic, largely due to reduced spending on travel, restaurants and other services. Although the household savings rate has declined from a pandemic-era high of more than 30 percent to nearly 7 percent, many high-income households in the US have significantly more to spend than they did before March 2020. This is despite the high cost of goods and services at the highest rate of inflation in 40 years.

leading from the front of the plane

And when they spend money on travel, consumers are more likely to spend on premium seats, Bastian said. Delta has bet heavily on the aircraft front, investing most of its aircraft fleet in new cabins, including a new premium-economy cabin. He added that the airline is establishing itself as an upscale brand, and is well positioned to capitalize on the trend.

“Over the next few years, we expect premium seat growth to continue [economy]and we believe consumers are turning to higher quality products,” said President Glenn Hounstein. “To date, premium recovery has been led by the consumer, and we see more upside as more More business travelers return to the skies.”

Delta reported that its March domestic premium revenue was 100 percent of 2019 levels. Premium travel to Latin America and Europe also recovered, with no measurable decline in demand due to the Ukraine war, and Delta sees significant growth potential in this segment as corporate travelers return.

In March, domestic corporate travel accounted for 70 percent of March 2019, and transatlantic business travel accounted for nearly half. The federal pre-departure test requirement for travelers returning to the US is disappointing demand for transatlantic travel, but Bastian said Delta is “encouraged” by signs that Washington may soon lift the requirement. He did not specify a time frame as to when the requirement could be abolished.

Business travel is also expected to increase as more companies reopen their offices. In 2020 and through last year, small and medium-sized businesses led the way in business travel improvements, while larger companies largely fielded their employees. That’s changing, Bastian said, as a survey of Delta’s corporate customers revealed that 90 percent plan to travel more in the second quarter. But travel is increasingly skewed towards meetings and events – group travel – than before the pandemic, he said.

Delta expects strong demand across its network this summer, with one exception: Asia. Although demand has increased in response to the easing of travel restrictions by South Korea and Australia, travel to Japan and China remains difficult. “We expect that heavily restricted regions, such as China and Japan, will continue to put pressure on overall Pacific unit revenue until the borders are fully reopened,” Hounstein said. The company expects most restrictions to be eased in the third and fourth quarters of this year.

By this summer, Delta will operate at 84 percent of its 2019 capacity — or the number of seats it flies — and is on a spree to hire employees for its operations. The carrier has hired 15,000 people since January last year, with 4,000 joining the company since the beginning of this year. These workers are replacing 18,000 Delta employees who took a voluntary severance package when the carrier downsized in response to the pandemic.

Where Delta needs employees most is on the ground: airport workers, reservation centers and maintenance workers. It competes directly with retail and other industries for these employees. The company has not struggled to hire pilots and flight attendants, although Bastian acknowledged that training these employees would take time. “The pilots have a training pipeline and it will take some time for the pilots to be fully in range and where we want to deploy them; it will probably take a year or two,” he said. [and] Similarly, we are hiring flight attendants and there is a queue for how many people we can put through the training pipeline. ,

Delta is increasing the pay of all employees by 4 percent in May. Bastian said that as of April 1, the company dropped an insurance surcharge of $200 for unvaccinated employees, as Delta moves to treat COVID-19 as a recurring seasonal illness.

And now, the number

The first quarter was split into two halves: first, with the reduction in demand by the Omicron version; And second, the dam breaking of stalled demand for travel. Bastian said demand picked up sharply after the February President’s Day holiday in the US. The carrier reported an adjusted loss of $793 million for the quarter, but was profitable in March and generated an operating margin of about 10 percent.

Oil prices have risen because of the Ukraine war, but Delta has so far faced no setback from passing its increased costs on to consumers. Fuel costs are up about 30 percent compared to the fourth quarter of last year. But these costs are partially offset by the jet fuel that Delta takes from its refinery in Pennsylvania. The company realizes a profit of 20 cents per gallon of jet fuel from its refinery, especially for its New York flights.

Delta reported revenue of $8.2 billion in the first quarter, down 21 percent from the same period in 2019. Cargo revenue of 289 million was up 51 per cent compared to 2019 and is expected to rise in the second quarter as companies scramble to relax the aftermath of the lockdown in China. disrupted the supply chain. Delta expects revenue in the third quarter to recover to 93-97 percent of 2019, and the company is forecasting an operating margin of 12-14 percent.

“We are thrilled with the performance of our team. We have been waiting for two years to see this,” said Bastian. “We are ready to go. Customers are ready to go. We are expecting a strong summer season.”

Subscribe to Skift newsletters for essential news about the business of travel.