The European Union hosted an unprecedented number of Ukrainian refugees. what will happen now? 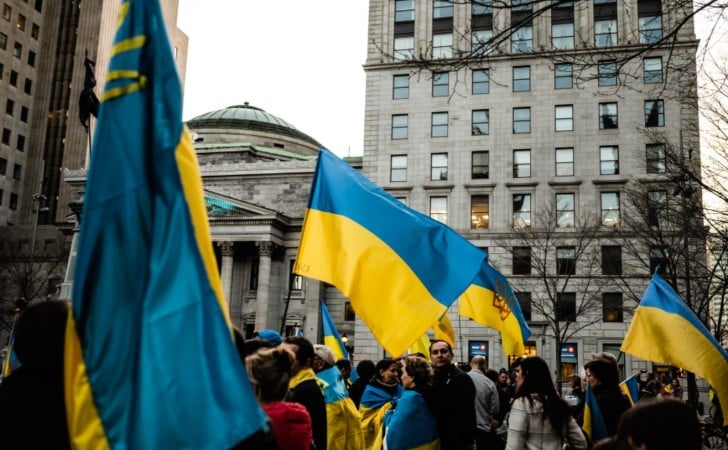 Irina is optimistic and full of life. Even though her life at 28 has been devastated and turned upside down over the past nine months, like millions of other Ukrainian refugees, she is trying to be resilient. « I have been living in Spain since March 2022. I fled with my mother and my teenage niece when it was possible to walk through Kyiv, so we fled, although the bombing continued. We first arrived in Poland, where we heard about a voluntary organization offering Ukrainians to move to Spain. And we got on the bus without knowing where we were going or for how long, because the shelters in Poland were already full,” he told Global Voices in a telephone interview.

Now, Irina lives in an apartment set up by volunteers, but she’ll only have it until the new year. Although Spain had determined it would give monetary aid to Ukrainians fleeing the war, so far no payments have been made, although it has provided room and board to those whose accommodations were arranged by the Red Cross.

“I had a successful small business in Ukraine, selling sportswear and yoga through an online store and Instagram…everything was made in Ukraine by seven local manufacturers…now only two are left. Apparently, the store is barely functioning,” said Irina.

Irina’s boyfriend and brother joined the Ukrainian army. Irina’s mother and her niece Natsya returned to Kyiv in July. The teenager couldn’t cope with losing all her friends from Ukraine and going to a school where she didn’t speak any of the languages ​​she used (Catalan schools teach Catalan and some Spanish). Irina’s mother’s husband became seriously ill (men of military service age cannot leave Ukraine), so she also returned. This happened after Russia again bombarded Kyiv.

Irina said, “There they are without light and sometimes without water… But Natsya is very happy.” “He doesn’t want to leave Kyiv again.” Irina, on the other hand, lives in Poland and is taking intensive courses in Spanish and 3D design, and hopes to find a job in Spain. “I worked in a bar for a while, but I realized that instead of spending my life working in a bar, I should learn Spanish and become a professional,” she said.

Irina is not the only case who wants to live out her life in the country that granted her temporary protection. According to UNHCR, other EU countries have accepted 4.7 million refugees from Ukraine.

There is no precedent in the legal history of the European Union.

In an unexpected turn of events, the European Union opted for a temporary safeguards directive that requires EU member states to accept higher flows of refugees. The directive was created during the war in Yugoslavia (2001), but was not implemented again until March 2022, shortly after the Russian invasion of Ukraine.

Stefan Phillips, a researcher at the Human Rights Institute at Åbo Academy University, explained in a telephone interview with Global Voices that:

The challenge is that this is the first time that this directive has been implemented across the EU. We do not have very old cases to attract and it is limited in terms of time with a maximum period of three years. However, this temporary safety directive runs for 12 months till March 2023 and was extended till March 2024. The idea is to continue evaluating the situation in Ukraine and decide whether there are still reasons to offer this temporary protection. After those three years, we don’t know, because we don’t know how long the conflict in Ukraine will continue to the point where people will need to move out of that country and we don’t have any precedent to make a better decision. .

Lena is another refugee from Ukraine who was able to get a job in Finland after waiting five months for her documents to be ready. “Ukrainians are very hardworking, thrifty and persistent people. During the eight months of the war, those who did settled down little by little and found a way to earn money,” he said.

Lena is studying Finnish and hopes to live in the European Union. In a telephone interview with Global Voices, he explains:

I came from Kharkov and despite the fact that at the end of March the situation in the city where I lived was tense, I decided to leave with the motivation to find a better life elsewhere, but clearly my priority was war Had to avoid My apartment in Ukraine is intact, but I already know that I will do everything I can to stay here. The residence I got under “temporary protection” was an opportunity to find ways to get something in Finland that I had not been able to get before. For someone who is not part of the European Union, getting a job is very complicated. Furthermore, the fees for any studies are more than the average Ukrainian can afford.

But will Ukrainian refugees be able to stay in the EU after the directive expires? Stephen says:

This is for each member state of the European Union to decide. There is nothing that the Temporary Safety Directive can answer, as it is very limited in terms of mass flows with large numbers of people moving at the same time. However, while it is interesting and relevant, it did not materialize in 2015-16, when a lot of people were coming to Europe as well. When the directive expires, each member state will decide whether to grant another form of residence. What the temporary directive does is provide residence permits and access to various health, social and educational services to people fleeing the war in Ukraine. The Directive lays down the basic standards for this, but then all EU member states have considerable freedom in how they want to implement it. Each of the 27 states will have to review it to see how they implement it. The directive is not prescribed as a permanent measure, it is designed to meet a crisis. The way states deal with people who want to stay after the terms of the temporary protection directive have passed will vary by state. There is nothing in the Directive to compel the States to act in a certain manner after the expiry of the protection period.

The uncertainty of this situation is high and it is not yet known how EU states will approach changes to the status of people under temporary protection once the directive and the conflict have ended. Nevertheless, it is something the EU should start to consider.

Lena says there are other categories for Ukrainian refugees that the EU has to consider:

The key question at the moment is how the unemployed, for whatever reason, will live in the EU countries when the war ends. For example, where should the elderly and people with limited mobility go if there is nothing to return to Ukraine? Furthermore, within a year or two, family reunification will be an essential condition for the European Union. Since many have already asked themselves questions like “shall we go back to Ukraine with dad or is dad coming with us?” I think many of those who have already decided to stay will choose the second option.

The cost of the war in Russia is high for Ukraine: the unemployment rate is nearing 35% and the poverty rate could reach 25% in December this year and 50% by the end of next year. Clearly, most of the 4.7 million Ukrainian refugees want to return home when the war ends and the EU needs to consider what happens to those who do not want to return.