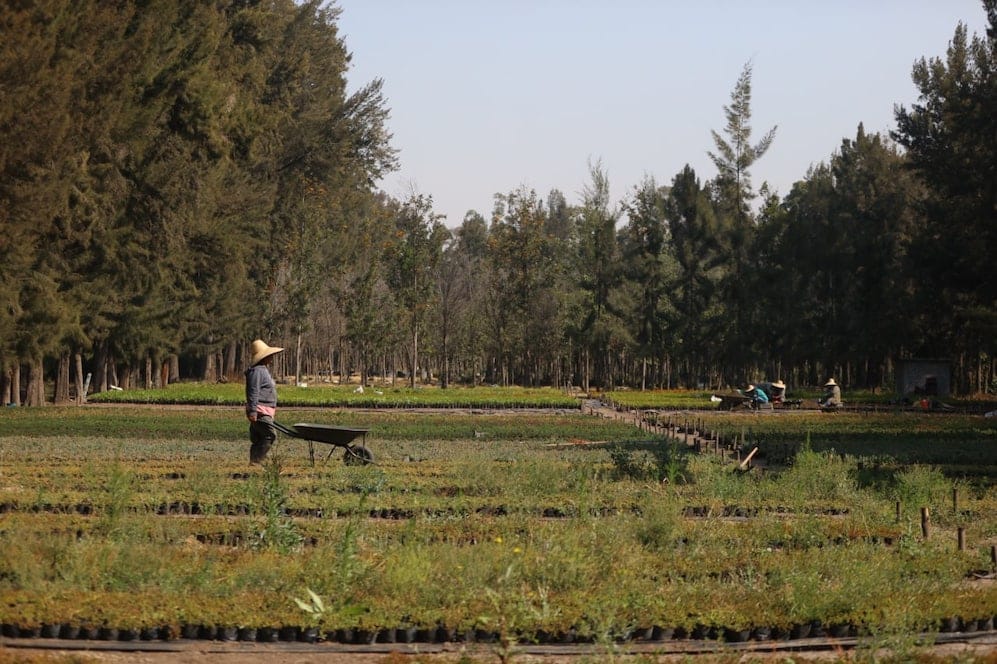 The government of Mexico City donated 3 of the 58 hectares of the Nezahualcóyotl nursery for National Guard facilities. This aroused the concern of the residents of the region which borders the Canal de Chalco and researchers due to the continuous urbanization and loss of nature to Mexico City.

MEXICO CITY.- Cecilia Urbina Martinez sells used clothing on the outskirts of the housing unit where she lives with her daughter in the El Molino Tejonco neighborhood, next to the Canal de Chalco. She is a neighbor of the Nezahualcóyotl Nursery, where she worked for 4 years planting “small” trees as she witnessed the birth and transplant of the various species that serve to reforest Mexico’s Valley of the Clouds.

The government of Mexico City handed over 33,000 square meters of its land to the federal government “to be allocated for the facilities of the National Guard”, which disintegrates more than 3 hectares of the nursery’s 58. One of the main functions of this protected natural area is to provide vegetation to the cities.

Cecilia was not aware of the decree and knowing this causes her anxiety. She remembers that she stopped working in the nursery when she injured her knee. He considers it a fundamental green space for Xochimilco.

The Neza nursery is completed, this 2022, 30 years of Xochimilco being a protected natural area. There are more than 150 species of plants, a good part native to the region and others outside that have adapted. This includes trees, shrubs, herbaceous plants, ornamental plants such as magnolias, jacarandas, pines, ash trees, liquidumber, cacalaxochitl, palms, ebony, ahuahuates, ahuejotes, agaves, cacti, black acacias, shrubs such as acacias, rocios, Lantana is. Kalanchoe and hundreds more plants that are perfect for the city.

“Like that! I used to plant them when they were little… no, now, they’re gentlemen, trees, you see them from above.” The nursery inside is very nice. Right now they take away a lot of trees for Christmas”, says the woman, as she sits with her neighbor selling them.

You feel calm upon entering the nursery, birds chirp for no reason and butterflies flutter over newly planted cacti. Workers walk along wide corridors paved with the same reddish earth that gleams in the face of the slanting winter sun, amid the long shadows of hundreds of trees that lend a fresh scent to the environment.

Luis Miguel Robles Gil, founder of the Union of Environmental Groups IAP, knows the nursery and has visited it several times, as he was in charge of Protected Natural Areas of the Southern Region of the then Federal District from 2007 to 2015 and from 2012 to 2015 Protected Natural Area from Xochimilco Wetlands.

“Impacts to be derived from the delivery of Neza Nursery to the National Guard may result in a change in land use if the project considers new construction for its own infrastructure, basically subtracting the green area from the protected natural area , originally established ”, assures Luis Miguel.

He assures that both the Neza and Cumanco nurseries do not provide value as natural ecosystems, however, the decree implies a loss of vegetation.

“After being transformed into nurseries, they do not provide much value as natural ecosystems. What may be valuable in neza nurseries is in terms of economic investment and compliance with the functions for which it was created, because Handing over the property to the National Guard would result in a significant loss of resources and time to recover the operation currently being carried out. ”, assures Luis Miguel.

Many nursery workers express that they have not been informed about the order and how their work may be affected. They prefer to remain anonymous for fear of retribution, however, they fear that reducing the length of nursery care will also lead to a cleanup of staff. They assure that they love working in a place full of nature and it makes their day. At least 250 people between temporary and basic work.

The decree describes the history of the nursery. In 1989 he acquired the land which he described as “improving the agricultural sector through Chinamparia, increasing the recharge and control of aquifers, through the creation of regulation lagoons, reducing the flooding and subsidence affecting the area”. and was determined to constitute a regional reserve based on the provisions of the partial urban development program of the then Xochimilco delegation. In 1992 it became a priority area for conservation.

The part that the nursery assigns to the National Guard is near the Canal de Chalco Avenue, on the side of the X-ejido of Xochimilco, “to be able to carry out real estate operations at hand, providing for this purpose the various documents”.

football Visited the nurseries, colonies and the surrounding areas of both the ghats to know what people think about the decree. Most of the people who were consulted in the survey were unaware.

Maria Sanchez lives in the Valle de San Lorenzo neighborhood. She is the mother and grandmother of a family, for her the relationship and importance of parenting in her offspring is essential.

“This place is for the kids, to take them there to play, to appreciate the trees, all this nature that has been lost. Let’s say what’s happening. They’re going to give the area to the guards and I don’t think they’re going to occupy it to make gardens, are they? They’re going to use it for other things, that’s wrong, we need trees to live, not soldiers. Because She is the property of us and our children, our grandchildren, everyone, ”she assures as she makes the last purchase of the work.

Mariano Rodríguez is a resident of the El Molino Tejonco neighborhood. Talk with partner at your doorstep. He assures that the nursery has always been in the lives of the residents of his neighborhood. They are worried that after this they can give away more land from the protected natural area.

“That nursery, good for a long time, is the one that gives us life, it is like a small lung, that gives life to all. It is wrong to give land to them because, it should not be done because it is our heritage is considered and it is reserved, nothing should be made”, he says.

Armando Palma works at the Cumenco pier, adjacent to the nursery. He is the owner of the tourist trajinera that runs through the channels of Xochimilco. According to his approach, the security element in the area, both police and guards, has increased.

He has worked in several nurseries and had to go to Nezahualcoyotl to collect plants and thus got to know them inside out. “There they grow different types of plants, many, which could be lost if they give them these hectares because they want to build a barracks. In fact, what is worrying is the loss of the ecological zone”.

“Xochimilco lost its nursery, formerly the San Luis Tlaxistemalco nursery, which is now the Corona facility. The green areas that provided the city with oxygen are steadily disappearing and this is the only nursery left in the area,” Armando describes.

“This is an area that was not used”

Isidro Recillas Silva is the Deputy Director for Project Design and Evaluation of the Nezahualcóyotl Nursery of Mexico City’s Ministry of the Environment (Sedema). In an interview, he assured that the reason for building the nursery was to produce saplings for reforestation of the urban area.

He describes that nurseries have changed somewhat over time in what he calls the “vegetable palette,” or types of plants, according to which they have researched which plants to introduce into an urban area, and that depending on that it does not cause problems. Plant where it is located, if it is a sidewalk or garden.

According to Engineer Isidro, “It (the area given to Cedena) is still part of the polygon (of the nursery), I do not know the conditions there. I do not know and I apologize for those legal or administrative conditions, which they had to follow in order to consolidate that contribution or debt.” football,

However, he assured that the issue of the decree has already been communicated to the workers and the union and that no personnel cuts are planned as a result.

In an interview engineer Isidro says, “It was an area that was without any utility production business and that was what determined its viability.”

“All this was an analysis done by government sectors in this context, we did not participate in it. I don’t know in detail, but the effect is in an area that was not used, urbanization, I don’t know what they call it, there will be no condominiums or those types of things, it’s not allowed inside nurseries and The same has to be discussed with the concerned subject of security (GN). We don’t interfere there.”

When asked what would be affected or lost from the nursery by this decree, Isidro Requilas claimed that nothing is affected and there is an exodus:

“There’s nothing really, they’re empty fields, it’s not a green field, it’s land that’s not producing, that’s got no trees, no vegetation, nothing that can be thrown or Getting deleted make it.”

No impact on the business case inside the nursery, describes the engineer and the various activities they perform.

“With regard to environmental retaliation, this is another process that takes place in other areas of the Secretariat and will determine in due course,” says Rickilas.