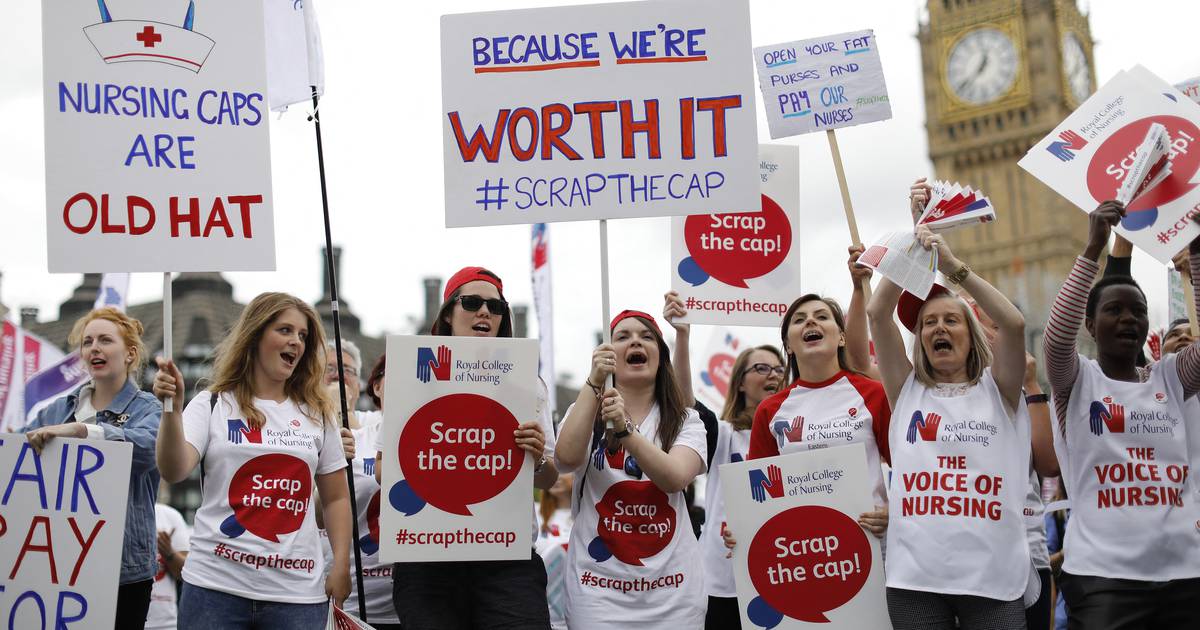 British nurses launched an unprecedented strike on Thursday as a “last resort” to press for better pay in the face of a growing living crisis that is causing growing social discontent in the United Kingdom. The 100,000 members of the Royal College of Nursing (RCN) union in England, Wales and Northern Ireland will stop working from 8am to 8pm after rejecting a government offer.

This is the first national strike in RCN’s 106-year history and will be followed by another day of strike on December 20. “We did not take the decision to go on strike lightly,” Amira, a London-based nurse, told AFP. “We’re tired. We’re fed up”, he says. “We need a pay raise to survive”, he confirms.

Mark Boothroyd, a 37-year-old emergency room nurse, says the high cost of living has made it difficult for him to pay bills, transportation and rent. According to Boothroyd, who works at St Thomas’ Hospital in central London, low pay means newly qualified nurses spend only a year or two before leaving the profession.

Their vacancies cannot be filled which puts immense pressure on the remaining employees, many of whom suffer from psychological problems due to the stress. “The conditions are appalling and cannot be allowed to continue,” he says. According to the RCN, there are 47,000 vacant nursing positions in England, partly due to “poor pay”.

Many nurses—the majority—and European nurses, led by Spanish, left the United Kingdom as a result of Brexit, which ended the system that allowed them to record their British experience in their countries of origin.

British public health officials said in September that some nurses had begun leaving food to feed and dress their babies. And one in four hospitals in England set up food banks for their staff. The RCN deplores that nurses’ wages have fallen by 20% in real terms since 2010 due to several years of growth below inflation. This year, inflation in the United Kingdom remains at its highest level in four decades, although it eased to 10.7% in November compared to 11.1% in October.

The strike comes at a time when Britain’s respected National Health Service (NHS) has been battling years of low funding. It is also added that since the pandemic there is a long list of patients undergoing medical tests including those related to cancer.

Health officials warned unions that treatment could be affected by the closure, at a time when seasonal respiratory conditions such as the flu are adding to the pressure on already overcrowded hospitals. Despite its extraordinary nature, the RCN strike is part of a growing wave of strikes by workers in a range of activities in the public and private sectors, including rail workers to customs police, ambulance personnel and teachers.

It may interest you: He overtakes Elon Musk in the ranking of the world’s richest people

But Conservative executive Rishi Sunak confirms that nurses’ wage demands, which they call for to recover purchasing power, cannot be financed by meager public coffers after the pandemic. Health Minister Steve Barclay said, “Our nurses are incredibly dedicated to their work and it is very unfortunate that some union members are going on strike.”

Claiming to have interacted “with healthcare workers outside the public sector” to ensure safe levels of staffing, he declared himself “concerned about the risk it poses to patients.” “These are difficult times, but we have fully accepted the recommendations of the independent NHS pay review body to give nurses a pay rise of at least £1,400,” he said, adding that he could not do more .