The new Breza has been launched at an affordable price with many features, a headup screen in front of the driver; Get a lot with a sunroof Ending the wait for its brand new Brezza (2022 Brezza), Maruti Suzuki has launched it today. This is also Maruti’s first car with a sunroof. This compact SUV has many great features including head-up display screen, electric sunroof, ambient light, wireless charging dock, 360-degree camera. The company says the new Breza is bigger, bolder, energetic and stylish. It has a new generation K-Series 1.5-dual jet WT engine. It supports smart hybrid technology. The engine is mated to a 6-speed transmission. Breza has received more than 45,000 pre-bookings so far. Its initial ex-showroom price is Rs 7.99 lakh.

First on the segment headup display
The Brezza has become the first compact SUV in its segment to feature a head-up display. This screen is fixed on the driver’s front dashboard. The headup display screen is at the bottom of the dashboard. It opens automatically when the car is turned on. The special feature of this screen is that it will make navigation easier for the driver. This means that the direction arrow will appear on this screen, so that the driver can easily drive by looking ahead. That means you don’t have to see it on the infotainment screen anymore.

Read Also:  This company made a splash in India, sold more than 5 crore bikes and scooters

Read more – The whole car was covered with dung to get relief from the heat, then this fancy idea worked

6-speed transmission is also available
The new Breza has a new generation K-Series 1.5-dual jet WT engine. It supports smart hybrid technology. The engine is mated to a 6-speed transmission. This engine generates 103hp of power and 137Nm of peak torque. The company claims that its fuel efficiency has also increased. The new Brazer manual variant will give 20.15 kp / l mileage and the automatic variant will give 19.80 kp / l mileage. Breza has been launched on four trims LXi, VXi, ZXi and ZXi +.

The Brezza will also get a 360-degree camera
The brand new Hot Brezza sports a 360-degree camera similar to the Baleno. This camera is a very high-tech and multi-information camera. This camera will be connected to the car’s SmartPlay Pro Plus touchscreen infotainment system. It is jointly made by both Suzuki and Toyota. This infotainment system supports wireless Android Auto and Apple Car Play. The special feature of this camera is that you can see the scene around the car on the screen while sitting inside the car. This will make it easier to park or overturn the car.

Read Also:  Mahindra Bolero will be launched soon in the new incarnation, you have to understand what will be special in five points

Wireless charging docks are also available
For the first time, a wireless charging dock has also been provided in the car. With this dock you can easily charge wireless smartphone. It supports fast charging. At the same time, complete safety measures have been taken to avoid excessive heat. It will also have many connecting features of Maruti. Which makes this compact SUV much more luxurious and sophisticated. 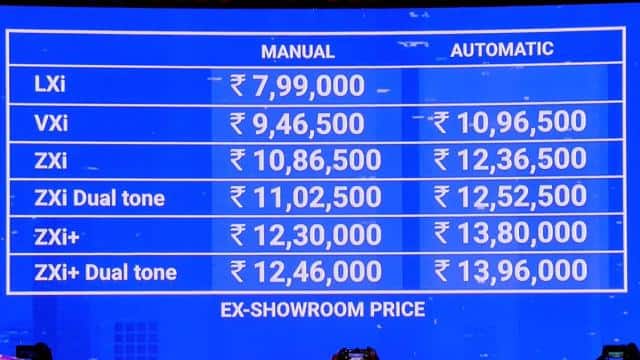 After Baleno, Swift, this car is the most bought car

Opportunity to buy Maruti cars at low prices in August, lots of discounts

Major Japan Railways is now powered only by renewable energy.