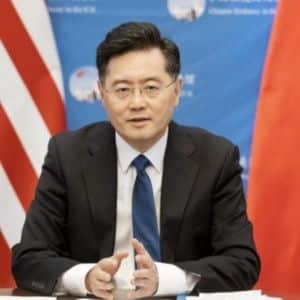 China’s newly appointed Foreign Minister Qin Gang and US Secretary of State Antony Blinken held a phone conversation on Sunday regarding relations between the two countries.

According to a statement posted on the official website of the Chinese Foreign Ministry, Qin bid farewell to Blinken and recalled his candid, in-depth and constructive meetings with the secretary during his tenure as Chinese ambassador to the United States.

The incoming Secretary of State told Blinken that he hoped to maintain a close working relationship with the US Secretary of State and to promote better relations between the two countries.
The statement said both sides also exchanged New Year greetings during the call.

new chancellor of #ChinaQin Gang, spoke on the phone with the Secretary of State for #americaAntony Blinken, and many candid, in-depth and constructive meetings, and said that he looks forward to maintaining working relations to improve China-US relations. pic.twitter.com/VL3p1rbn6c

During the 20th Congress of the Communist Party of China (CPC, ruling), held last October, Qin became part of the Central Committee, a group of about 200 members (plus about 170 substitutes) that lead the formation.

The new foreign minister takes up the post of ambassador in Washington in 2021, at a time when relations between China and the United States are deteriorating after then-President Donald Trump launched a trade war with the Asian country in 2018.

Yi will head the Office Directorate of the Central Foreign Affairs Commission of the Communist Party.