The search for ancient life on Mars 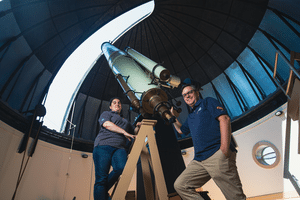 The first year of the Perseverance rover’s mission to Mars captured the imagination of scientists and the public alike with an interplanetary helicopter flight and the first opportunity to hear the sounds of the Red Planet.

But two University of Cincinnati doctoral students say the best is yet to come in year two when the rover and its Perseverance science team begin searching for ancient life on another planet.

UC College of Arts and Sciences geology students Desirée Baker and Andrea Corpolongo are working on the NASA science team, using the rover and its helicopter companion, Ingenuity, to explore Jezero Crater near a ancient river delta that could contain clues to the first known extraterrestrial life. .

UC Associate Professor Andy Czaja was part of the NASA advisory council that chose where to send the rover for the best chance of finding evidence of ancient life. Now he and his two students are members of the mission science team helping NASA explore the Red Planet to answer fundamental questions about the origins of life in the universe.

A critical mission task: collecting rock samples on the Martian surface to bring back to Earth during a future mission.

Czaja is one of 16 scientists from around the world named in June to a new NASA science group that will plan how the global scientific community will share and study those samples. The team includes experts in geology, geochemistry, planetary physics, and epidemiology, among others.

“Mars is at the frontier of science. I’m excited and honored to be a part of this,” said Czaja, who studies Precambrian paleobiology, astrobiology and biogeochemistry.

Baker and Corpolongo work shifts as tactical documentarians, taking notes on daily decisions and their rationale to help the hundreds of other science team members stay informed and up-to-date when they’re not working. In particular, Baker documents decisions and discussions about an instrument called SHERLOC that uses cameras, spectrometers, and a laser to search for signs of past microbial life on Mars.

“Every day on Mars is called a sun. For each day’s planning, we document what the pilot and scientists have in store for the next sol,” Baker said.

The science team has a strong spirit of exploration, he said.

“It’s mind-boggling to think about it,” he said. “You are exploring another planet, looking at things never seen before and helping to interpret and share them.”

The rover performs tasks in both daylight and darkness, so science team members work unusual hours during the Martian sun, which is 37 minutes longer than Earth’s 24-hour day.

Corpolongo also serves as a Campaign Implementation Documentalist, planning the mission two days ahead of the tactical team.

“That team will put together a plan two soles in advance if everything goes perfectly,” said Corpolongo. “Then, as each tactical change begins, look at the previous campaign’s implementation document report to get a high-level picture of what’s happening today.”

Usually, the rover’s itinerary and goals go as planned, but when there are surprises or challenges, the campaign implementation team adjusts accordingly, he said.

“I call it a science party. It is difficult for me to put into words how great it is to be part of this international mission with eyes from all over the world,” said Corpolongo.

Baker said that after its historic flights proved successful, the Ingenuity helicopter is serving as a forward scout for Perseverance, helping to identify potential pitfalls and intriguing rocks on its designated route.

“That has been an unexpected advantage for Ingenuity. Now we are finding new ways to use it,” Baker said. “The rover has to be careful where it drives. It is a desert environment with soft sand.”

Czaja said he doesn’t know if Perseverance will find evidence of ancient life on Mars. But he is confident in the rover’s ability to search for him. And the location NASA selected for the search is promising, he said.

Jezero Crater sits next to what scientists believe to be an ancient river delta. On Earth, these are likely places to harbor evidence of ancient life, as organic life would be washed downstream into this stagnant water, where it would quickly become covered and preserved in fine sediment.

“It looked like a river delta from orbit, but there are things you can’t see from orbit that we have now that show this was, in fact, a delta,” Czaja said.

If Perseverance finds what appears to be tangible evidence of ancient life, confirmation will likely have to wait until a return mission to retrieve the samples the rover collects. These analyzes will surely reveal other surprises on Earth.

“That’s one of the great things about sample return. You’re not doing it just to answer the questions we have today,” Czaja said. “There may be questions that no one has thought of yet. The person who thinks of that question might not have been born yet.”

Read Also:  As the world warms, so does climate misinformation

Perseverance has celebrated a string of successes from launch to landing on Mars seven months later via a Skycrane, a rocket-powered descent vehicle that lowered the rover to the surface via cables. Before launch, NASA engineers described the spacecraft’s final descent through the thin Martian atmosphere as “seven minutes of terror.”

Czaja and other members of the science team tuned in to JPL’s live feed to watch as they learned of the spacecraft’s fate, deploying its parachute, jettisoning its heat shields and lowering the rover by cables to the Martian surface.

“Seeing the landing, I remember I was too excited to sit down,” Czaja said. “My heart was in my throat. Suddenly, an image of the bottom of the rover and its surroundings on Mars appears.”

Perseverance was ready to explore.

“There is a big question if we find evidence of ancient life on Mars. Is it the same as ancient life on Earth? Did life on both planets have the same origins? Corpolongo said. “There are so many questions.”

In the first year of the mission, Czaja had the opportunity to name a geographic feature on Mars according to established naming conventions for each quadrant mapped. NASA created a list of approved names associated with national parks around the world. One quadrant was associated with the Verdon Regional Natural Park in France, for which Czaja named a ridge Monte Gourdan after a feature in the Alps.

“It has been quite exciting. When you work day to day, you lose sight of that a little bit. But when you take a step back, it makes you think, ‘This is really exciting,’” Czaja said.

Czaja said it’s been fun to help make decisions about the mission. Every choice has costs, risks and benefits that must be considered, he said.

“We are a group of scientists, so we like to discuss the merits of our ideas,” he said. “There is so much we would like to explore. You want to be as efficient as possible and accomplish all mission objectives in the allotted time.”

Many things can go wrong on a mission as complicated as this, so each day’s work is valuable and presents tantalizing scientific possibilities, Czaja said.

“You will never know if you stop looking. It could be the next corner or the next hill,” Czaja said.

Timberwolves to open October 20 at home vs Houston