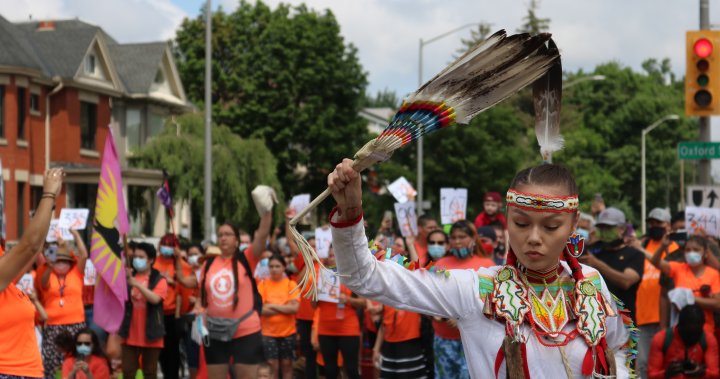 Thousands are expected to descend on the London, Ont., downtown core on Friday morning for the second annual Turtle Island Healing Walk to honor survivors of Canada’s residential school system and the thousands of Indigenous children who never made it home.

“This day is a day of honour. This walk is a walk to heal. And our future is a future of hope. We may not know their names but together we raise them up. On July 1, we walk for them,” said a post on Walk’s Facebook page.

Walk’s director Alyssa Rose, Little Thunder Woman, said participants will begin gathering in Victoria Park for a ceremony at 9:15 a.m., with the walk beginning about an hour later.

“We will start with the opening prayer at around 9:15 am. We’ll be welcomed at around 9:30, and then we’ll have the grand chief, some of the area’s chiefs as well as the youth council and our jingle dress dancers sharing the stage and a few words,” said Rose, who also appeared as the antagonist. Works at -Human Trafficking Coordinator at Atalohsa Family Healing Services.

Rose said those who had gathered would begin walking around 10:15 a.m. with a silent memorial north of Richmond Street to honor those who never made it home.

“In Richmond and Oxford, we’ll have our jingle dress dancers, our hand drummers lead it, and then we’ll have orange smoke again this year, to send those people home and acknowledge the survivors in our community. will represent respect,” Rose said.

The walk will then proceed east down Oxford Street, south down Colborne Street, and then west onto Dufferin Avenue. The route is shorter than the five-kilometre route scheduled to run in 2021, a change Rose says was made more friendly to the elderly and people with disabilities.

“Knowing the truth for indigenous people is nothing new, but it is coming to light in a way that is extremely overwhelming, and to know more and more about what is happening. It’s been a year, But a year is not a long time. It is not a long time at all,” Rose said.

Ontario has said it believes the province has more unmarked burial sites than the 12 identified by the Truth and Reconciliation Commission, which documented abuse by Indigenous children in residential schools and the deaths of more than 4,000 children. went. Countless children are still missing.

The province has earmarked millions for residential school burial site investigations, and earlier this month the federal government focused on creating a new legal framework to ensure the proper treatment and protection of residential school burial sites in Canada’s indigenous communities. Appointed an independent special negotiator to work with.

The search for unmarked graves at two former residential schools in the London area began late last year: Mount Elgin Residential School in Muncie and Mohawk Institute Residential School in Brantford. The Mohawk is poised to become a historic site and educational resource with the help of a fundraising campaign organized by the Woodland Cultural Center.

‘It will mean a lot’: Mohawk residential school survivors push to park in surrounding green space

Since the first Turtle Island Healing Walk was held last year, a walk that was attended by at least 10,000 people, Rose says she spoke to others in the community about the positive impact of the walk and the hope and support it brings. heard continuously.

“More and more people were coming forward and asking if walking was going to happen again. ‘Can we make room again? Because we need that space,'” Rose said.

“The numbers are still rising, the truth is still being shown. But at the same time we are facing many issues. That’s why we need a place where it can hold hope, love, kindness, honesty, but still find a balance together where we can walk together like that, move towards reconciliation,” she said .

“Not everyone can celebrate what Canada Day represents for many people. Not everyone can identify with it. So this is a place for our relatives, our communities and all the colleagues and members of the community who live on this day. Want to stand with us.”

The Indian Residential School Crisis Line (1-866-925-4419) is available 24 hours a day for anyone experiencing pain or distress as a result of their residential school experience.