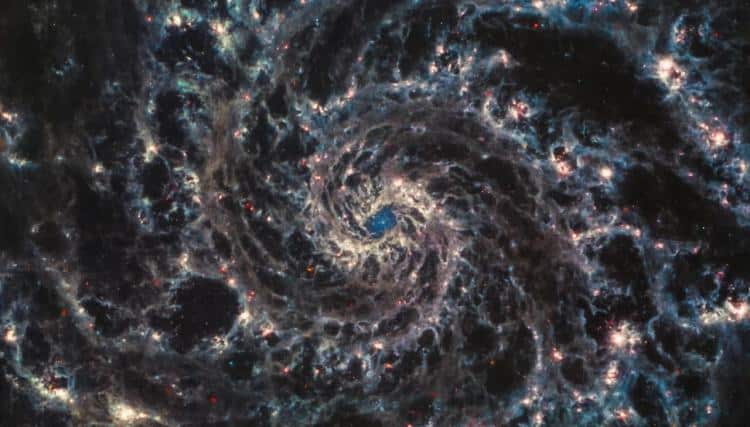 Amazing moment of the Spiral Galaxy as captured by the James Webb Space Telescope (JWST). The view here is so spectacular that anyone who sees it gets goosebumps.

JWST captures at least two spectacular spiral galaxies. The first is NGC 628 which is known as Phantom Galaxy and the second is NGC 7496.

As reported by Science Alert, Saturday (23/7), the survey was undertaken to map the relationship between the young stars themselves and the cold molecular gas clouds that gave rise to them.

Read Also:  Why I'm Excited About the First Images from the James Webb Space Telescope

NGC 628 is a type of galaxy known as a “Big Design” spiral galaxy. This galaxy has bulging arms, is fully formed, and is relatively open.

Whereas NGC 7496 is located just 24 million light years away. This galaxy is known as the barred spiral galaxy, with the spiral arms extending from separate trunks that cross the galaxy center.

Read Also:  The Incredible Image Has Us So Excited What the James Webb Space Telescope Can Do

This is thought to be the result of uneven density in the disk of the Milky Way, the dense regions pulling stars toward themselves to form rods. These rods are considered rich star formation regions because the gas is blown inward towards the center.

Therefore, beautifully barred spirals such as the visible NGC 7496 are certainly an excellent “laboratory” for studying the birth of stars.

‘Shops looted, continuous bombardment in front of 150 policemen’: Violence not stopping in Bengal