The sun flexed its tremendous magnetic muscles, and two solar spacecraft captured the spectacle on film. Early this morning, Earth’s star was released a 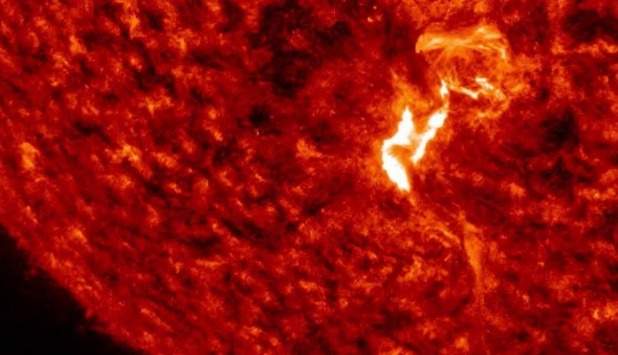 The sun flexed its tremendous magnetic muscles, and two solar spacecraft captured the spectacle on film.

Early this morning, Earth’s star released a long-period solar flare, sending high-energy radiation into space for nearly three hours. The surprising event was captured in various wavelengths by NASA’s Solar Dynamics Observatory (SDO), which has been studying the Sun from Earth orbit since 2010.

The brightness measured M3.4, placing it in the “middle” range of a solar eruption. However, it was powerful enough to cause a brief radio blackout in the Asia-Pacific region of Earth. (Scientists classify severe solar flares into three types: C, M, and X, with C being the weakest and X being the strongest.)

This morning’s glow was also linked to a coronal mass ejection (CME), a giant cloud of extremely hot plasma that ejects from the Sun at tremendous speed. SDO and the Solar and Heliospheric Observatory (SOHO), a NASA/European Space Agency investigation that began in 1995, snapped imagery of today’s CME, showing the massive size and impressive motion of the plasma cloud.

Large CMEs hitting Earth can trigger powerful geomagnetic storms, which can affect both negatively (potential satellite damage) and positively (supercharged auroral displays). But it does not appear that today’s CME was aligned with Earth, experts said.

The views of the two spacecraft were complementary, given their different orbits; SOHO orbits the Sun at Lagrange Point 1, a gravitationally stable location in space about 930,000 miles (1.5 million kilometers) from Earth, in the direction of our star.

The sun has stopped several flares recently. This should come as no surprise, given that our star’s 11-year activity cycle is expected to peak in 2025.