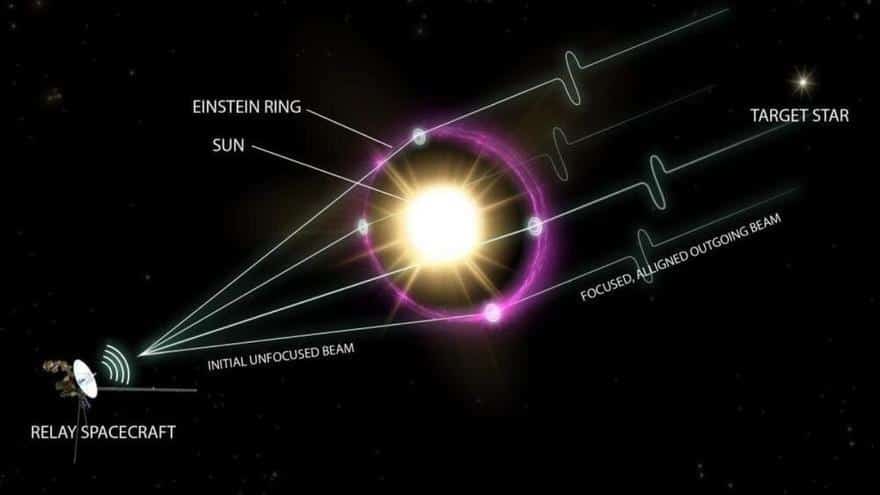 Through a phenomenon known as gravitational lensing, aliens can transmit signals using the Sun as a “hotspot” in a vast Internet-like intergalactic network. US researchers are evaluating this possibility as part of a new field of study in the search for the extraterrestrial intelligence (SETI) field. However, after the first analysis, they did not detect any concrete signals that were of extraterrestrial origin.

In a study published in The Astronomical Journal, scientists from the State University of Pennsylvania in the United States have argued that the Sun may be part of a vast space communication network: Using the effects produced by the phenomenon of gravitational lensing, extraterrestrial civilizations would broadcast signals over enormous distances, using our star as a key point within an interstellar network.

According to an article published in Live Science, the new search strategy for extraterrestrial technological signals is based on Albert Einstein’s findings: In 1915, the German physicist demonstrated that gravity distorts the fabric of space-time. In other words, this means that massive objects, such as stars and galaxies, bend the light around them in an effect called a gravitational lens, This effect allows astronomers to appreciate extremely distant objects whose light has been distorted by more massive galaxies or galaxy clusters in the foreground.

But when using a magnifying glass, gravitational lens “magnification” works best when using a specific spot known as the focal point. Because of this, scientists have speculated about tech-savvy extraterrestrial civilizations investigating them in spacecraft. center of stars turning them into points or nodes of a vast intergalactic communication network.

In the case of the Sun, its center of gravity It will be located approximately 550 astronomical units (AU), or 550 times the distance between Earth and the Sun. Since light travels in both directions, a probe located at that location can magnify both the light reaching it and the reflected light: gravitational lensing can therefore be used to efficiently transmit signals across interstellar distances.

Any new way to continue testing?

According to recently presented findings meeting 241 from the American Astronomical Society (AAS) Six five-minute scans for radio signals from the Sun’s center of gravity using the Green Bank Telescope in West Virginia have yielded no positive results, according to research leader Nicholas Tuse. However, experts say that their approach should be explored and deepened as part of studies related to the search for extraterrestrial intelligence (SETI).

For example, Tuse and his colleagues noted that alien probes located at the gravitational focal point of the Sun may light up only sporadically. Whereas, other stars have properties that make them Potential node of a vast “spatial internet”, so they should also be targets for additional searches in the future. Ultimately, the researchers believe that with more time and resources devoted to research, their method may become drinkable in the long run.

To summarize this new approach, the astronomers explained that stars in their gravitational focus provide a great advantage for interstellar communication, perhaps as part of an interstellar network. If the Sun is part of that network, then the gravitational focus of nearby stars needs to be probed. If these probes are present within the Solar System connected to said network, We can detect them by intercepting transmissions in these centers,

Although the search did not yield any results, it was carried out through a wide bandwidth beyond the inner gravitational focus of the Sun: scientists believe that The same method can be applied to other frequencies and targets.,