The theft of the thesis of Minister Yasmin Esquivel: AMLO assures that it will support the decision of UNAM AMLO assured that “there is a political interest involved” in the complaint about the alleged plagiarism of Minister Yasmin Esquivel’s thesis.

President Andrés Manuel López Obrador assured that he would support the decision. National Autonomous University of Mexico on the assumption plagiarism of thesis minister’s yasmin esquivel and urged UNAM to settle the matter Before January 2, 2023Prior to the election to the office of President of the Supreme Court of the Nation (SCJN).

During the morning press conference, the Mexican President acknowledged that there is a coincidence Between the works of Minister Esquivel and obtaining the university degree of lawyer Edgar Ulysses Baez Gutierrez, For which he celebrated that the country’s highest study house is probing the matter.

“It is great that UNAM is going to resolve this matter and clarify it, hopefully it will do so soon before 2 (January). I consider that. that the matter be settled in UNAM, I see it well, that UNAM experts and officials investigate and tell opinion on this matter”, AMLO said at the National Palace.

,I will support the decision of UNAM?, he was asked.

,Obvious, because they have to try. This is an opinion. There is no way to judge how they are behaving with the media. As it was before and is now in its heyday political lynchingreplied.

In this context, the head of the executive has assured “Conservatives” fear that Minister Yasmin Esquivel will reach the presidency of the SCJN “Because she is a woman who agrees to change.”

“Who do the conservatives want? I’m not going into it, I’m just telling ’em what they want for the richest ministerThey want one for president. But it is good that UNAM is going to address this issue and clarify it, hopefully it will do so soon, before the second,” he stressed.

Minister Yasmin Esquivel, one of the 11 members of the Supreme Court, denied plagiarism of her bachelor’s thesis as a report. guillermo sheridan,

Similarly, the minister announced that he has filed a complaint with the alleged prosecutor plagiarism of your thesis projectWell “This is an original and authentic project that I started writing and revising since 1985., A year before the ‘similar’ thesis that would have been prepared by the student Edgar Ulises Baez Gutierrez.

The minister has confirmed this in his letter UNAM opened a review processwhich he considers sufficient to define and analyze on the basis of university law, and said that he was Willing to cooperate with university officials To clarify the situation and confirm the truth.

“For the time being, I have denounced the alleged plagiarism of my thesis project before the relevant prosecutor’s office,” he said.

Yasmin Esquivel assured that these are defamations that seek to interfere with a process that is solely the responsibility of the Ministers of the Court. He said that this is a perverse campaign that seeks to influence public opinion and the sentiment of those who should decide on the election for the presidency of the court. 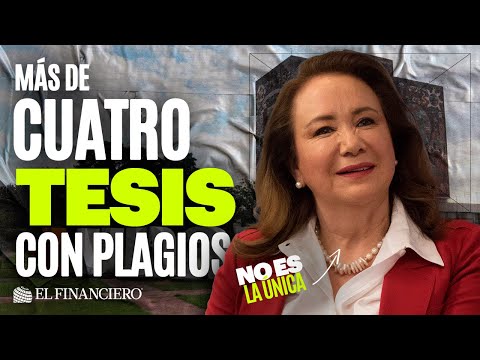