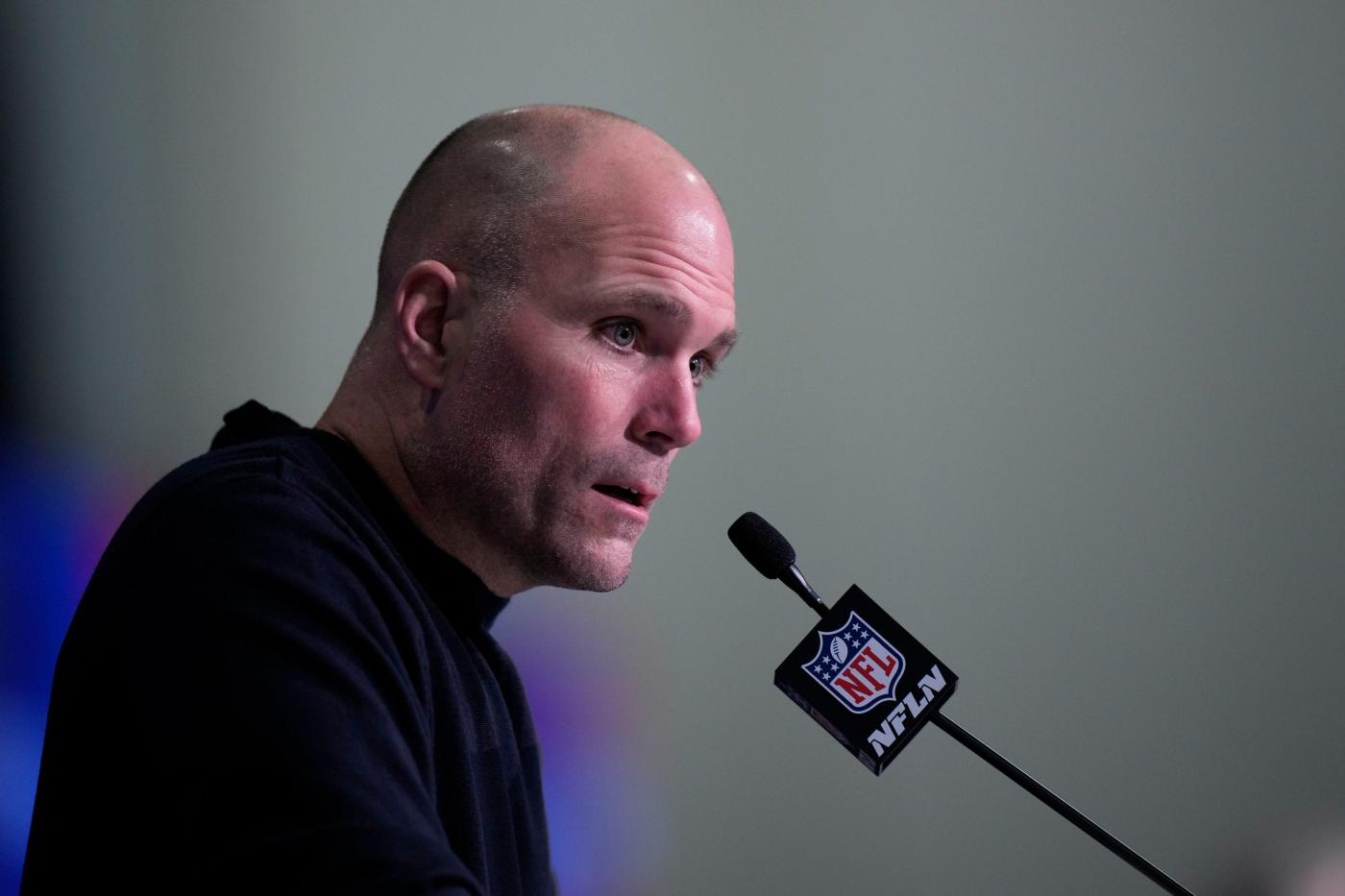 The Ravens know what they need to fix their roster this offseason. It’s a lot: an offensive tackle, a center, an edge rusher, a couple of defensive linemen, a couple of cornerbacks, more depth pieces here and there.

As the start of free agency looms, the Ravens also know what they have to spend in free agency. It’s not a lot. With the release of cornerback Tavon Young and the retirement of offensive tackle Alejandro Villanueva, general manager Eric DeCosta has about $16 million in salary cap space. At least $5 million will likely be set aside for the Ravens’ draft class. Several million more will be allocated for an in-season expenditures.

It’s a relatively small war chest. It’s also not a fixed one. The Ravens’ financial picture is expected to change before the new league year starts Wednesday, if not before the NFL’s legal-tampering period opens Monday. There could be trades and contract restructurings and cuts that expand (or contract) the team’s offseason budget.

As always, DeCosta and team officials will be guided by a familiar refrain in their team-building approach: “Right player, right price.” But other big-picture considerations will have to be made, too.

DeCosta joked at the NFL scouting combine last week that good ideas give teams about a six-week head start in the NFL, “and then someone else is going to do it.” The lag time on compensatory draft picks was a little longer.

“It took a long time for other teams to catch up,” DeCosta said in Indianapolis. “Now everybody is doing it. It’s just that when you have a good idea, somebody else is going to come along and cannibalize it.”

That won’t change the Ravens’ offseason strategy. They’ll still pursue the kind of free agents who don’t factor into the NFL’s nebulous formula for awarding mid-round draft picks — players like guard Kevin Zeitler, whom the New York Giants released five days before he agreed to terms with the Ravens last March.

Because of the Ravens’ limited spending power, they might not even be able to offset big-name departures with big-name signings. Bradley Bozeman could earn the biggest contract of any free-agent center. Patrick Ricard could emerge as one of the NFL’s highest-paid fullbacks overall. Defensive lineman Calais Campbell won’t come cheap. Outside linebacker Justin Houston should have plenty of suitors.

Depending on the size of their contract, 2022 playing time and potential All-Pro honors, all of which determine the relative compensatory values, the Ravens could be in line for several 2023 picks as high as the fourth or fifth round. This year, they’re expected to receive two fourth-round picks for the loss of pass rushers Matthew Judon, whose deal with the New England Patriots was worth $13.6 million annually, and Yannick Ngakoue, whose Las Vegas Raiders contract was worth $13 million annually .

There are already a handful of players who could be this year’s Zeitler. In Seattle, the rebuilding Seahawks released eight-time Pro Bowl inside linebacker Bobby Wagner. The Arizona Cardinals cut inside linebacker Jordan Hicks, who had 116 tackles last season. The Tennessee Titans parted ways with Pro Bowl guard Rodger Saffold. Free-agent offensive tackle Trent Brown was not released, but the New England Patriots’ contract restructuring last year means he won’t factor into the formula. More notable names could join them soon.

“I am confident that we’ll have the resources to sign our own guys back,” DeCosta said at his season-ending news conference last month, “or, if we see very good value in [the] free-agency market, to maybe target somebody, knowing, as you guys know, that we’ll also factor in comp picks along the way.”

When DeCosta took over for Ozzie Newsome, he wanted to avoid the back-loaded contracts that too often handcuffed the Ravens’ salary cap management. And in negotiating lucrative, long-term deals, the Ravens’ contract outlays have indeed been more conservative than some of those DeCosta inherited.

The Ravens’ front office has its limits, though. If DeCosta makes any big moves this offseason, chances are that the deals won’t include voidable years. These “dummy” years, popularized by the New Orleans Saints, are tacked on to the end of contracts to help a team pay a signing bonus and prorate the bonus over more years than actually exist on the contract.

Essentially, the salary cap mechanism allows teams to buy now and pay later. If a player signs a five-year contract with a $30 million signing bonus, and the deal voids after three years, his team would have to account for the $6 million in annual cap charges over the first three years, then absorb the remaining $12 million in prorated bonus money in the fourth year.

“There’s always that risk-reward,” DeCosta said last week of the Ravens’ approach to structuring contracts. “It’s kind of like, as a kid, maybe you know not to do something and you do it anyways. What I try to do is understand that what we do once, we run the risk of doing it again and again. The idea of ​​precedent, the idea of ​​putting yourself in a position where agents can say, ‘Well, you do it this time, you did it that time’ — that’s a hard thing to break away from.

Quarterback Lamar Jackson is entering the final year of his rookie contract. The Ravens have insisted they’re committed to hammering out an extension. The uncertainty over his long-term future in Baltimore, however, could inject some uncertainty into free-agent deals.

Considering Jackson’s potential and the franchise’s championship ambitions, the question isnt so much whether he’ll be around in 2023 but what kind of contract he’ll play under. If the Ravens can’t get a deal done over the next year, they could place the franchise tag on the 2019 NFL Most Valuable Player. According to salary cap website Over the Cap, the 2023 franchise tag for quarterbacks is projected to be worth about $34 million, which becomes fully guaranteed when signed.

A long-term deal would commit the Ravens to more money in the long term but likely help their cap space in the short term. In the first two years of quarterback Patrick Mahomes’ megadeal with the Kansas City Chiefs, his cap hits were $5.3 million and $7.4 million. For the Houston Texans’ Deshaun Watson, they were $9.8 million and $15.9 million. For the Buffalo Bills’ Josh Allen, they’ll be $10.2 million and $16.4 million.

Jackson’s 2023 season would be his sixth — all of his high-profile peers except Prescott signed an extension before his fifth year — which could change the calculus on his early-year cap hits. But the difference in savings between a cap hit of $10 million, or even $20 million, and $34 million is significant. Jackson’s next contract is one more unknown for team officials to consider as they plot out their long-term future.

Say the Ravens want to sign a top-tier free agent to a multiyear deal this offseason. Because of their limited cap space, they’d likely have to back-load the bulk of his salary after the first year of the contract. Five Ravens are set to count at least $9.5 million against the cap in 2023, totaling nearly $76 million. If Jackson signs a $34 million franchise tag, that figure jumps to $110 million. Would the Ravens be willing to add another player with a cap hit of $10 million to $20 million, essentially tying up more than half of their projected salary cap in seven players?

With a record-breaking extension for Jackson, that future would likely be unavoidable. But the more the Ravens can plan for, the better prepared they’ll be.