There’s a lot of work behind Mother’s Day bouquets 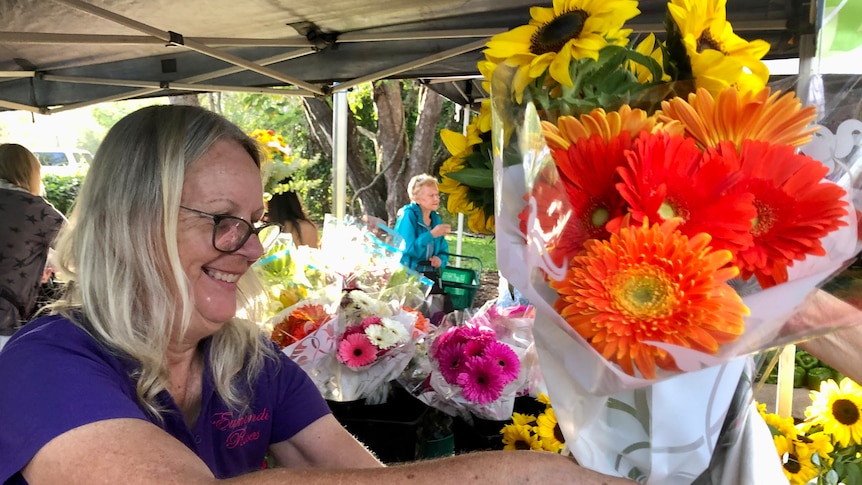 Lynn Bayfield’s nerves go haywire and she pushes her body past the point of exhaustion, but her aching hands fly away as she greets customers with a smile and herself to meet Mother’s Day demands. drives to.

The co-owner of Eumundi Roses said construction was a nightmare.

“We prepare for two weeks straight and the last two days are 48 hours straight, there’s no sleep, and then we collapse,” she said.

Work toward a day in May began late last year when she and her father planted the first of three crops of lianas, sunflowers, carnations, gerberas, snapdragons, celosia, daisies, scented stock, native flowers and foliage .

“It’s high pressure, high stress, because you have a lot of money to ride on it,” Ms Bayfield said.

He said he hedged his bets.

“We grow an early crop, a timely crop and a late crop and hope that one of them hits the target.”

February floods shed the seedlings and made growing conditions even more difficult.

While elsewhere in Australia, florists are excited by their support for locally grown flowers, Ms Bayfield has expressed her disappointment at losing sales of cheap imported bouquets.

A sobering report for the Australian government prepared by Deloitte Access Economics showed that Australia’s flower industry has seen a 25 to 30 percent decline in revenue and trade numbers over the past decade.

This was mainly due to increased imports from countries such as Malaysia, Colombia, China, Kenya, South Africa and Ecuador, where labor costs were significantly lower.

The report showed that an estimated 616 businesses made $235 million from flower production in Australia, with a third making less than $50,000 a year.

“We have seen a lot of Australians supporting locally grown flowers during COVID and this has given growers a little bit of confidence,” Ms Jabor said.

Flower Industry Australia lobbied to expand the labeling of the country of origin to cut flowers, but Deloitte Access Economics recommended against this.

Ms Jabor said she “completely disagrees” with the company’s research findings that it is “not important to most consumers”.

“They (Deloitte Access Economics) believe that most Australians do not know that flowers are grown overseas,” she said.

“Therefore, people don’t think they should have the labeling of their country of origin because they think they are grown here.”

The federal government confirmed that it would not introduce country of origin labeling for cut flowers.

A spokesman for the Department of Industry, Science, Energy and Resources said it risks imposing exorbitant costs and could potentially put many small businesses and sole traders in the industry at a “competitive disadvantage.”

Ms Jabor warned that the invasive pests introduced into the country on imported cut flowers remain a real risk to flower growers and the wider agriculture industry.

“Some of these pests can wipe out crops, and my concern is that only 20 percent of each consignment is inspected,” Ms Jabor said.

“If you bring a plant into the soil, they can be kept by the department for six months, but a cut flower arrives in the country within 24 hours, barely at a glance.”

A federal Department of Agriculture spokesman said proactive management has improved compliance and reduced detection of pests of biosafety concern by 81 percent on consignments arriving in Australia between 2017 and 2021.

Read Also:  A cat in the house saves the birds in the bush | Science Environment