These two vehicles of Tata and Mahindra are coming to make a splash in the market, starting price Rs 5 lakh

The coming time is bringing great hopes for the country’s auto sector. In the next few months, more than one great vehicles are going to be launched in the country, ranging from the cheapest micro SUV Punch from Tata Motors to the next generation model of Mahindra’s famous SUV Scorpio.

Recently some information about these two vehicles has come to the fore. A few days ago, Tata Motors took the wraps off this SUV, in which the details of its exterior have been shared. Apart from this, the next generation model of Mahindra Scorpio has been spotted during testing on several different occasions. So let’s know about these vehicles –

Tata Motors introduced the HBX concept during the last Auto Expo, this micro SUV is based on this concept. Its design and look is also very similar to the concept model. The company has used ALFA architecture in manufacturing this SUV. If you look at the design of the rear, the tailgate is neatly carved, the integrated roof spoiler and the tail-lights with Y-shaped LED elements are similar to the HBX concept. Where it differs from the concept model is its rear bumper, which has been toned-down in the production model.

The company can give a 1.2 liter capacity petrol engine in it, which generates 83bhp power and 114Nm torque. This engine comes mated to a 5 speed manual transmission gearbox. The company can also launch it in the market with an automatic gearbox. This SUV will come with a naturally aspirated as well as a turbo engine. This SUV can also be launched with a 1.2 liter turbo petrol engine. It is being told that its price can start from Rs 5 lakh.

Mahindra is preparing to launch the fourth generation model of its famous SUV Scorpio. This SUV has been spotted during testing on several different occasions. According to the information, the new Scorpio will be bigger in size than the current model. In this, the company is offering a new design front grille with LED headlamps, C-shaped daytime running lights, new bumpers, fog lamps and 10 spoke alloy wheels. As for the safety features, the company can include features like Anti-lock Braking System (ABS), Electronic Brakeforce Distribution (EBD) and VSC with Speed ​​Alert, Parking Sensor, Dual Airbags as standard in it. 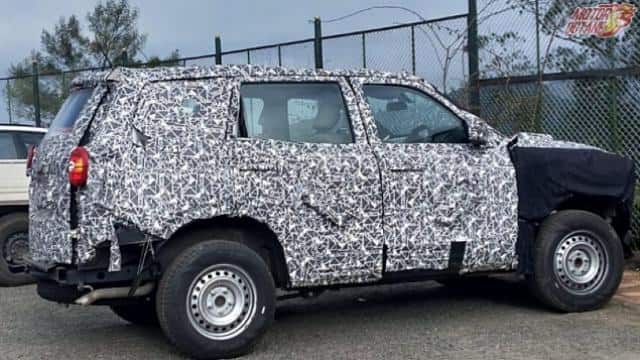