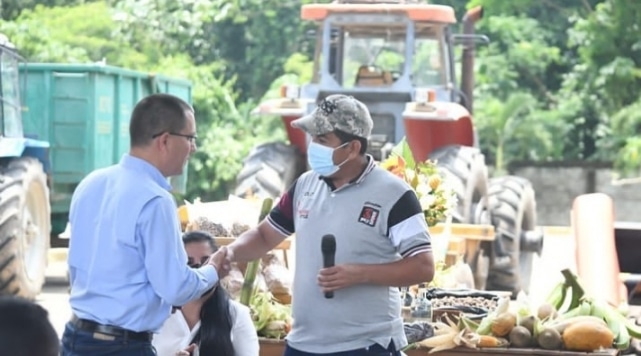 With the aim of strengthening the planting plan and boosting production in rain-affected areas, the national government supplied and distributed seeds to the Community Corn Grower Network in Socopo, Antonio José de Sucre Municipality, Barinas State.

The meeting was presided over by the Minister of Manpower for Communes, Jorge ArrezaHe highlighted the importance of community organization to move towards a productive economy.

Red de Maiceros is supported by the national government.

He said that despite all the difficulties for the acquisition of oil, as well as raw materials and basic supplies for the production of various commodities, due to the sanctions of the United States, Venezuelan producers, with the support of the National Executive, have fought forward. Manage to grow and achieve great results.

He mentioned that the farmers market in Sokopo, which is now 12 years old, is a great example for the whole country as it showcases and strengthens the work of each manufacturer to bring the goods directly to the customers, without middlemen .

“Producer sovereignty is possible with the popular organization, this meeting also served to present its project for a communal economic circuit for corn growers,” Arreza said.

Higher body of housing was established

In the company of civil defense commissions, the Bolivarian National Armed Forces and other institutions, Arreza visited the various communities affected by the Socopo River’s overflow.

The Minister evaluated the progress of the work as well as the focus on the families and the affected areas. He insisted that work began to protect the right bank of the river.

In addition, he received the Deputy Minister of Popular Power for Housing to install from the Sucre Municipality, the State Housing Superior Body, to inspect the damage to the structures and put forward the care plan.

He explained that in the first phase the necessary assessment is done for the rehabilitation of some 36 families and appropriate decisions are made to guarantee attention to each case.

More than two thousand road leaders will be elected in Barinas

On the other hand, Jorge Arreza, the political liaison of the United Socialist Party of Venezuela, attended a gathering with promoters and street bosses from the state of Barinas, ahead of the election as part of the agenda for the elections to be held this Saturday.

From the center court, Tikoporo Parish in Sucre Municipality, Arreza said that 2,242 community leaders would be elected in Barinas and urged the popular power to participate in the event.

The state’s political liaison said, “No one can tell you who to vote for, you vote for what sends your conscience and whatever you think will contribute to the community, be it old friends.” Or the new youth who are joining these elections.” PSUV in Barinas.

He informed that the election will begin at 2:00 pm with the application process, then voting, closing and finally verification of results.