They support migrants in El Paso, Texas ahead of Biden’s visit 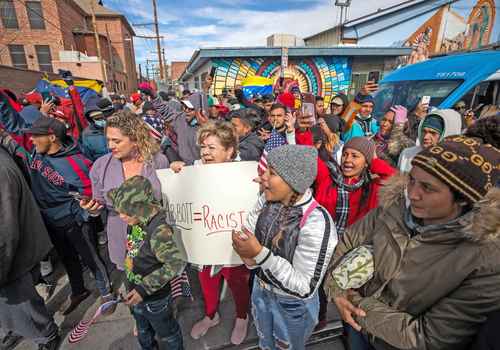 El Paso. Hundreds of people marched through the streets of El Paso yesterday and chanted “You are not alone” as they approached a group of migrants gathered outside a church.

Amid new restrictions aimed at cracking down on unauthorized border crossings, activists said about 300 migrants have taken refuge on the pavement in front of the Sacred Heart Church, some of them too afraid to seek formal shelter.

That’s the scene US President Joe Biden will see today on his first politically thorny trip to the southern border.

Democrats announced last Thursday that Cuban, Nicaraguan, Haitian and Venezuelan immigrants would be deported to Mexico if they entered the United States without authorization, in an expansion of the immigration policy called Title 42. was imposed during the epidemic.

The new rules provide conditional humanitarian permits to 30,000 migrants of these nationalities each month if they apply online and find financial sponsors.

Biden will arrive in El Paso this afternoon before traveling to Mexico City, where he will meet with his Mexican counterpart Andrés Manuel López Obrador and Canadian Prime Minister Justin Trudeau on Tuesday.

Dylan Corbett, who runs the nonprofit Hope Borders Institute, said El Paso is experiencing an increase in “an atmosphere of fear.” He said that immigration enforcement agencies have begun increasing deportations in Mexico and that he is seeing increasing levels of tension and confusion.

The US president’s new policy expanded on an ongoing effort launched in October to stop Venezuelans trying to enter the United States.

Corbett said that since then many Venezuelans have been left in limbo, putting a strain on local resources. He stressed that extending such policies to other migrants would only worsen their conditions on the ground.

“It’s a very difficult situation because they can’t move forward or go back,” he said. Those not being processed are unable to leave El Paso because of immigration checkpoints, most have traveled thousands of kilometers (miles) from their home countries and refuse to give up and turn in.

Corbett warned, “There will be those in need of protection who will be left behind.”

The new restrictions represent a major change to immigration rules, which will remain in place even if the Supreme Court strikes down a Trump administration public health law that allows US officials to deny asylum claims.