They throw a grenade and it explodes in the middle of a cockfight in a palanquin at Hidalgo (VIDEO). 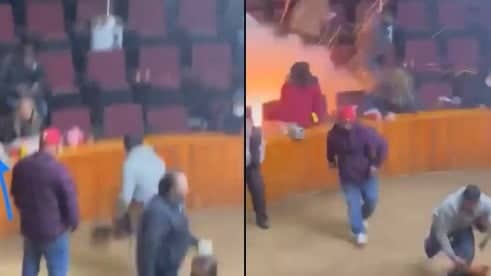 In a video that has already gone viral on social networks, the moment of the explosion is seen during a Palenque In Rancho San Pablo, in the municipality of Apazoyucan, Hidalgo.

apparently exploded because they launched hand grenades to the crowd during a cockfight at the La Roca Show Center in Apazoyucan.

The photos were recorded on December 26 at Rancho San Pablo.

Seconds before it exploded, attendees tried to flee, and luckily no one was hurt.

According to assistants, several subjects boarded a van when they exited and entered the property, and a couple were thrown hand grenades Towards the stand, where there was a crowd of people.

Local media reports indicate that hand grenades They belong to the house and the responsible fled the scene.

According to paramedics’ reports, only people with nervous breakdowns were treated.

Elements of the municipal and state police arrived at the scene, which evacuated the site except for the action being taken.

It was reported that some pieces of GrenadaApparently, two devices would have been thrown to detonate, but only one of them detonated.

The Attorney General’s office explained that it is the republican prosecutor’s office that would investigate because it is a federal crime.

So far, the reason for this attack is unknown, although it has been learned that the perpetrators of this crime are related to organized crime groups; However, this information has not been confirmed by the authorities.