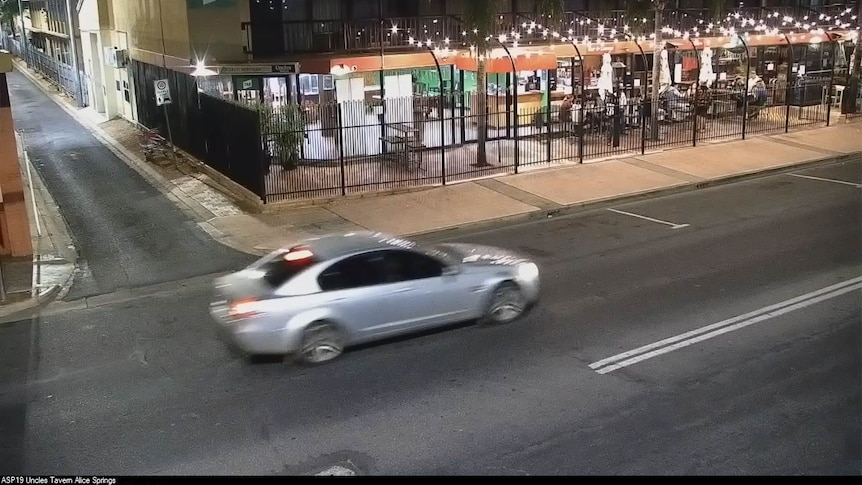 Northern Territory Police say a woman who died in an alleged hit and run in Alice Springs Tuesday night had entered onto the road shortly after allegedly being assaulted by her partner.

About 10pm, paramedics responded to reports that a woman had been hit by a car in the Alice Springs CBD.

She was taken to Alice Springs Hospital in a critical condition but was pronounced dead shortly after.

The car fled the scene and police are urgently calling for witnesses and anyone with information to come forward.

Senior Sergeant Mick Schumacher said detectives were reviewing CCTV footage of the incident captured by a local resident and a nearby service station to identify the car’s driver, but had not yet been able to do so.

Based on flecks of paint recovered from the scene, he said police had identified the vehicle as a silver VE model Holden Commodore sedan but they did not yet have a registration number.

These cars were manufactured between 2006 and 2014 “so it’s about a ten-year old car”, Senior Sergeant Mick Schumacher said.

“So if anyone’s noticed any damage to the front fender of a silver Commodore sedan we’d love to get that information,” he said.

“We’ll be putting all the resources that we can find into actually locating the vehicle.”

The victim has been identified as a 25-year-old woman from Central Australia.

Senior Sergeant Schumacher said it was a “terrible incident” and some CCTV from the area had helped police piece together what had happened in the moments leading up to the woman’s death.

He said the woman had been assaulted in an alleged domestic violence incident on a service road to the west of Gap Road.

Shortly after the assault she entered onto the busy thoroughfare and was hit by a passing vehicle, which fled the scene.

“They’ve not stopped, they’ve not rendered any assistance and we’d like to find the vehicle and certainly speak to the driver,” he said.

The woman’s partner declined to participate in a police interview.

Senior Sergeant Schumacher said detectives had spoken to a couple of witnesses and thanks to the CCTV, could see there were other people in the area who might have seen something.

“The CCTV footage has been amazing and crucial, but it’s quite grainy and it’s difficult to identify facial features of the person,” he said.

Intense exercise may reduce craving for fatty food while dieting