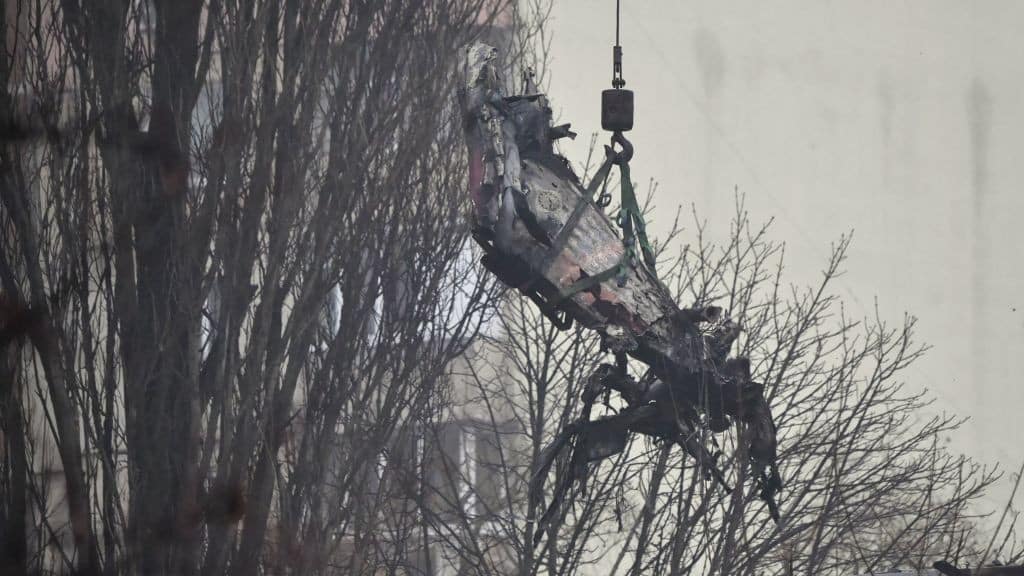 (CNN Spanish) — Top leaders of Ukraine’s interior ministry, including minister Denis Mopnastyrsky, died on Wednesday after a helicopter crashed in the Kyiv region for reasons that are still unclear.

The plane crashed near a kindergarten, bringing the death toll to 14, including four children, according to the country’s deputy head of the presidential administration, Kirillo Tymoshenko.

It is the first time that high-ranking Ukrainian government officials have been killed under strange circumstances since the start of the war, following Russia’s invasion of February 24, 2022.

This is what we know about the helicopter crash.

what happened and where

A Eurocopter EC225 “Super Puma” helicopter, as confirmed by a CNN producer after viewing flight manual remnants in the wreckage, struck a kindergarten and a residential building in the city at 8:20 a.m. local time (1:20 a.m. ET) crashed near Brovary, on the outskirts of Kiev, the capital of Ukraine

A CNN crew on the ground in the Kyiv region noted gray skies and very poor visibility.

Nine people were traveling in the helicopter, including Interior Minister Denis Monastyrsky, First Deputy Minister Yevgeny Yesenin and Secretary of State Yuri Lubkovichis, as confirmed on social media by Anton Gerashchenko, an adviser to the ministry.

The officers were traveling to Kharkiv in the northeast when the helicopter crashed.

According to officials, all the people traveling in the helicopter were killed.

At the place where the helicopter fell, many people died, including 4 children. The latest number of deaths stands at 14, after authorities corrected the figure downwards on a few occasions. “People died while bringing their children to kindergarten,” Tymoshenko said.

Although the death toll may increase.

Speaking to Tymoshenko, who was at the scene, the head of the Kyiv Regional Military Administration, Oleksiy Kuleba, told reporters: “At the moment there is no information on the number of missing children. Identifications are being carried out. Parents are coming, lists are being compiled.” are being done”.

Part of a helicopter that crashed near a kindergarten in Brovary, on the outskirts of the capital Kyiv, January 18, 2023, is removed. (Credit: Sergey Supinsky / AFP via Getty Images)

There are also at least 30 injured, of whom 25 are in hospital (including 11 children).

What do we know about the circumstances of the Fall?

It is not yet clear why the helicopter hit the ground and no official has yet suggested possible military action by Russia.

The Kyiv region is currently not under direct siege by the Russian military, although the capital continues to be sporadically shelled by cruise and ballistic missiles.

Is Bakhmut the Next Target for the Russians in Ukraine? 2:35

Meanwhile, the Security Service of Ukraine (SBU, for its abbreviation in English) launched a preliminary investigation into the incident and said on Facebook that “several versions of the tragedy are being considered,” including “violation of flight rules, involving incorrect technical operation of the aircraft.” helicopter, deliberate action to destroy the helicopter”.

reaction of the leaders

Ukrainian President Volodymyr Zelensky said in a written statement that it was a “terrible tragedy” and ordered Ukraine’s security services to “investigate all the circumstances”.

Zelensky called the officers “true patriots of Ukraine. May they rest in peace! May all those whose lives were taken this dark morning rest in peace!”

Meanwhile, European Council President Charles Michel paid tribute to the late minister Monastirski, saying he was “a great friend of the European Union”. Michel tweeted that the EU “stands with Ukraine in grief following the tragic helicopter crash in Brovary”.

With inputs from Maria Kostenko, Sophie Tanno and Brent Swailes.