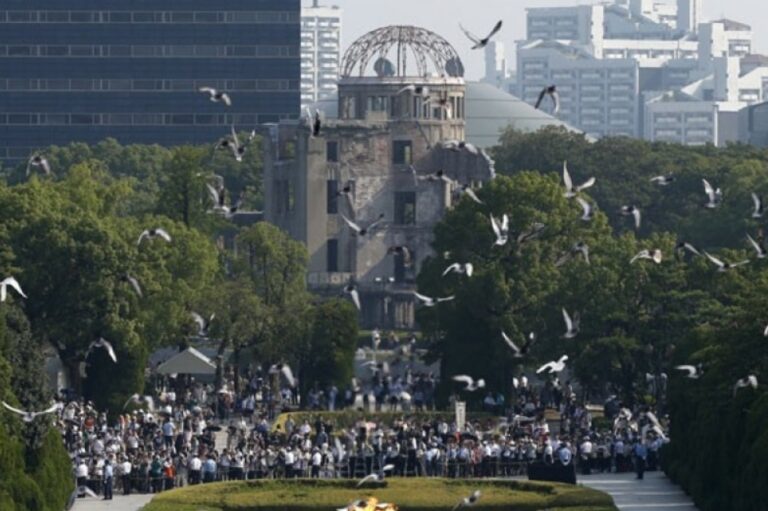 Hiroshima, Aktual.com About 77 years ago, the United States dropped atomic bombs on the Japanese cities of Hiroshima and Nagasaki in the final days of World War II.

Another town, Kokura, which is also a target, is lucky to eventually escape and not be targeted. Kokura was an industrial town and is now part of the city of Kitakyushu.

The common thread linking Hiroshima, Nagasaki, Kokura is that these three cities flourished through their role in supporting the Japanese war effort.

Each of these cities has many individuals dedicated to passing on the history of their hometowns to the next generation so as not to see the tragedy again.

In addition, on August 6, 1945, for the first time in human history, nuclear weapons were used as weapons of attack.

A uranium bomb named “Little Boy” was dropped from a B-29 bomber and detonated at 8:15 a.m. in the city of Hiroshima. By the end of 1945 the atomic bomb devastated the city and killed about 140,000 people.

Hiroshima developed as a military capital with a wide variety of military facilities and military groups after the Imperial Japanese Army established its 5th Division there during the Meiji era (1868–1912).

The port of Ujina served as a gateway for troops and as a major center for the movement of goods collected from across the country to be sent to battlefields outside Japan.

According to a summary of the results of a meeting at the US government’s Target Committee, where potential nuclear bomb targets were discussed at the time, Hiroshima was ranked as “an important Japanese army depot and port of call in the middle of an urban industrial area.” was given. .”

“The city (Hiroshima) is a good target on radar and depending on its size, most of the city could be seriously damaged (by bombs),” the summary document said.

Eiji Takebayashi, a professor at Hiroshima University of Economics, teaches the wartime history of Hiroshima and with his students guides several tourist destinations belonging to the period, including a former army food factory, to reflect on the event.

“The atomic bomb was dropped in the middle of the war. We must uncover the city’s (Hiroshima) history as a military capital so that (the atomic bombing incident) does not repeat itself,” Takebayashi said.

It is now revealed that Kokura is the next target after Hiroshima. A B-29 bomber carrying a plutonium bomb reached the skies over Kokura three days later on August 9, 1945.

However, poor visibility forced the aircraft to head for its secondary target, Nagasaki.

According to the official history compiled by the city of Kitakyushu, the target at that time was the Kokura Army Ordnance Factory. The ammunition factory produces small arms, ammunition and balloon bombs.

In addition, the US military has targeted Kokura in Fukuoka Prefecture since early in the bomb planning process.

The head of the Kitakyushu City Peace Museum, Yukihiko Shigenobu, argues that American strategy evolved over time from the goal of destroying the factory to the goal of “eliminating the city”.

In the final stages of World War II, Japan experienced random bomb attacks on Japanese cities, a famous example being the March 1945 bombing of Tokyo.

“The rationale behind (bombing) was to destroy the will to continue the war by burning the lives and livelihoods of non-combatants and their history. Atomic bombs can be seen as a logical next step,” Shigenobu said.

The head of the Oka Masaharu Peace Memorial Museum in Nagasaki, Noboru Sakiyama, said that Nagasaki was “probably targeted because it was seen as prosperous as a military port and as an industrial city after Mitsubishi set up its factories there.” was spotted”.

All of Mitsubishi’s ammunition factories, which manufacture torpedoes and Musashi Yamato-class battleships, are in Nagasaki. The city also has a thriving coal mining industry.

“If a military base or installation is built, it will be the first target of attack in the event of war. Owning the ammunition industry makes money, but in the end civilians bear the brunt,” said Sakiyama, the son of the Nagasaki atomic bombing victim.