Mahindra may soon end the wait for the launch of its first electric SUV, the XUV400. Actually, the company has released its first TVC ad. This 58-second ad shows both the power and features of the XUV400 Electric. After looking at the ad, it is also clear that it will compete directly with the Tata Nexon EV Price and Nexon EV Max. This latest SUV from Mahindra is based on the eXUV300 concept, which the company showcased at the Auto Expo 2020. However, till now the company has not announced its official launch date.

The test drives of Mahindra’s XUV400 Electric will start from December 2022. Its price and booking will be started from January 2023. It is believed that the company will start the delivery of this SUV from January itself. In the first stage, Mahindra XUV400 EV will be launched in 16 cities of the country. This includes Delhi, NCR, Mumbai, Bengaluru, Kolkata, Chennai, Pune, Ahmedabad, Goa, Jaipur, Surat, Nagpur, Trivandrum, Nashik, Chandigarh and Kochi.

, Mahindra XUV400 Electric has a push start/stop button. It gets a gearbar for drive, reverse and neutral. It gets a round speedometer. In which the speed of up to 180km/h has been mentioned. The boot space of the car is quite good. In this, four full size bags are shown to be kept easily. The car has a sunroof. It only has speed and brake pedals. Large screen infotainment system is given on the dashboard. The speed of the XUV400 Electric is shown in the full video.

, The XUV400 is actually an electric version of the ICE-based XUV300. It shares some similarities like inverted L-shaped LED DRLs, headlamps, side profile. On the other hand, some different features include a close-off front grille, Mahindra’s new Twin Peaks logo with bronze finish and X-shaped elements. The XUV400 also gets a revised tail lamp. Its length is 4.2 meters. That is, it is increased in sight and space. It gets a boot space of 368 liters.

Also read- This SUV will compete with these 6 including Maruti Grand Vitara and Kia Seltos, the company has lifted the curtain from the price

Battery of Mahindra XUV400 Electric
Mahindra XUV400 Electric will come with a battery capacity of 39.4 kWh. The battery pack is IP67 water and dust resistant. It has a chiller and heater for the battery. Its battery manufacturing will be in India only. The company claims that it will take 50 minutes to charge the battery up to 80% with its 50 kWh DC fast charger. Apart from this, charging the battery on a 7.2 kW/32A outlet will take 6 hours and 30 minutes. Apart from this, it usually takes 13 hours to fully charge the battery on the standard 3.3kW/16A domestic socket. 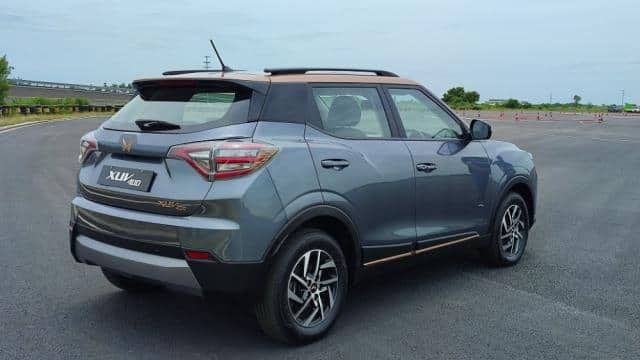 Mahindra XUV400 Electric Speed
This electric SUV vehicle can accelerate from 0 to 100 kmph in 8.3 seconds. Its PSM electric motor can produce a maximum power of 147Hp and peak torque of 310 Nm. The XUV400 can achieve a top speed of 150 kmph. It gets three driving modes Throttle Response, Region Response and Steering Feel.

Also read- Tata’s new electric car will arrive before the end of this month, will have 250Km range at such a low price