This Toyota SUV failed luxury companies such as Porsche, Audi, Volvo, Lexus; That is why it became No. 1 The growing demand for electric vehicles and the entry of dozens of companies into this segment has made it clear that the future is electric. This is why almost all car manufacturers are coming up with the idea of ​​their electric model. Which are also launched after a while. By the way, which company concept is so good, it also has competition. This time Toyota Compact Cruiser EV has won this competition. This Toyota concept car has been awarded the Best Design Award by Auto & Design Magazine in Milan, Italy. Let us know that Toyota is going to launch 30 electric cars in the market by 2030. Design of Toyota Compact Cruiser EV
The Toyota Compact Cruiser EV was designed by the Toyota Europe Design Development Center in Nice, France. The design of the compact cruiser EV is similar to the first generation of Toyota’s famous Land Cruiser model. It also reminds me of FJ Cruiser from 2006. Also keep in mind that this is just an idea, its production has not started yet. With a retro theme in mind, this compact cruiser EV has a horizontal LED headlight fixed with a grille with lettering. This gives it a J80 Land Cruiser-style face. Then there is the heavy front bumper with a large silver skid plate and raised, square-closed wheel arch. This makes it clear that it is an off-road SUV. 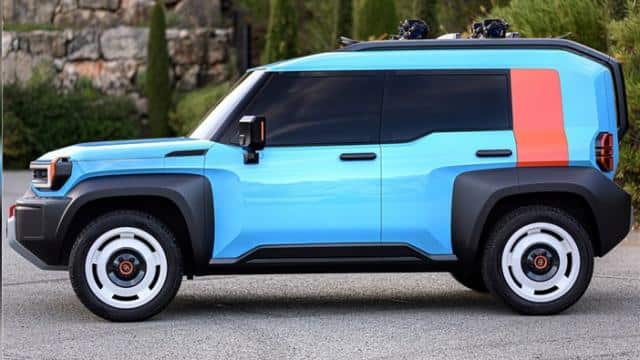 Technical features of Toyota Compact Cruiser EV
Toyota has not revealed any technical features of this compact cruiser EV. However, it is expected to be based on the electrified version of the Toyota TNGA platform which will be the larger bZ4x SUV. It is expected to feature a dual-motor set-up with all-wheel-drive. While this may be an idea for now, the Toyota Compact Cruiser EV could hit the auto market in the coming years. Once launched, this compact cruiser EV could challenge the Ford Bronco Sport and the next generation Jeep Renegade in the international market.

Toyota’s upcoming launch in India
In the Indian market, Toyota is preparing to enter the mid-size SUV segment with the most awaited urban cruiser Hyder. It is believed that its global showcase could happen on July 1. At the same time, it will be launched around Diwali. Toyota is also working on the next generation Innova that will be launched this festive season. It will be different from the existing Toyota Innova Krista, which will continue to be sold with the new model. Also, the Urban Cruiser Compact SUV could see a major upgrade in the coming months following the launch of the new Maruti Suzuki Brezza.