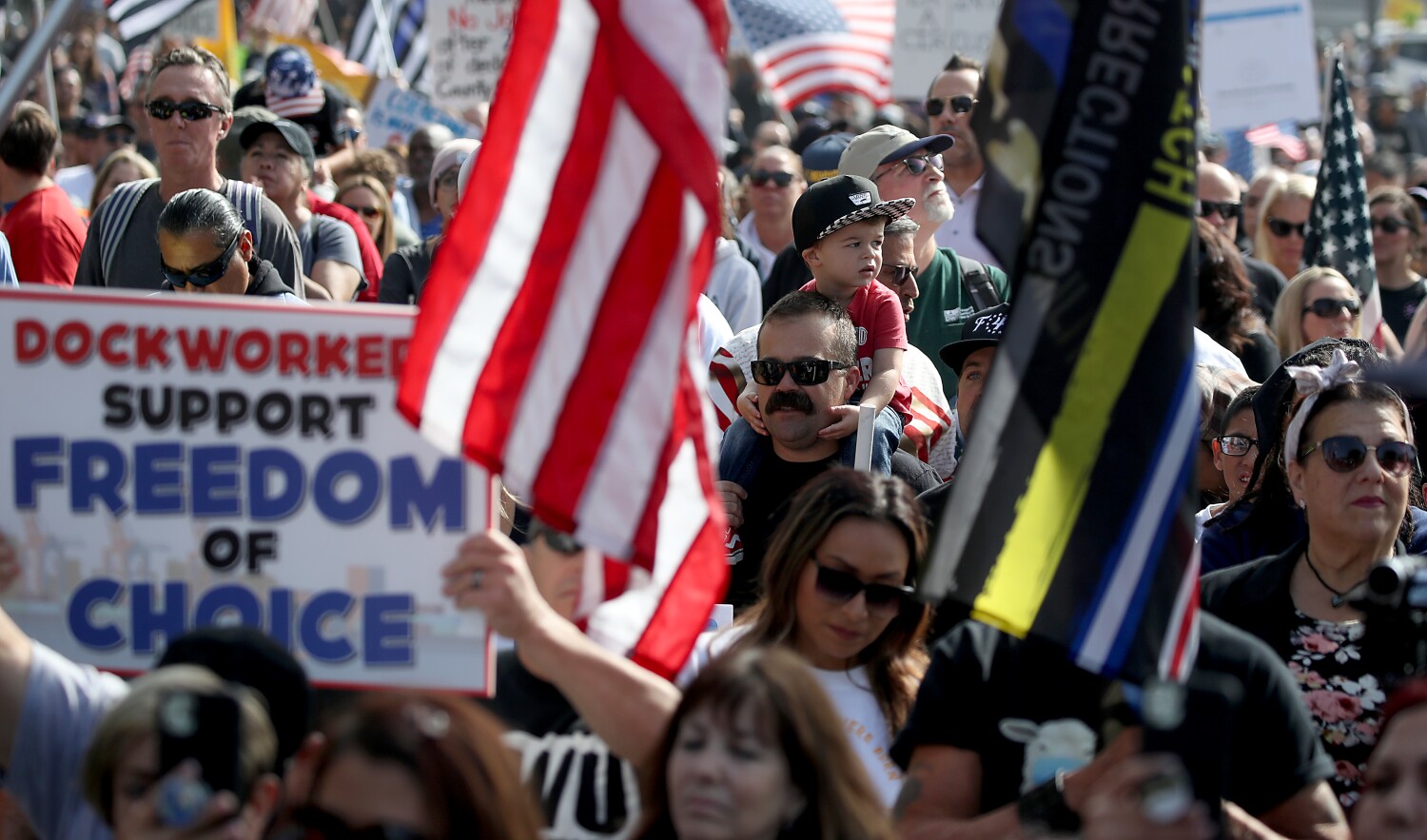 Thousands gathered outside Los Angeles City Hall to protest COVID-19 vaccination requirements on Monday – the day the city began enforcing some of the strictest national vaccination screening rules for businesses.

Participants in outdoor events with 5,000 or more participants must also show proof of being vaccinated or recently tested negative for coronavirus. City rules stricter than those imposed by Los Angeles County.

The new rules – along with vaccination requirements for employees at many levels of government and for school children – have generated deep controversy.

On Monday in Grand Park, outside City Hall, Cindy Lazo said she wanted to show her support for her son-in-law, an electrical engineer with the Los Angeles County Metropolitan Transportation Authority. According to her, he is the only source of funds for his family and is considering moving to another state, for example, to Texas, if he loses his job.

Lazo, 39, held up a homemade sign that read: “I’m not against Wax. I am against mandates. ”

David, a 52-year-old man who, like many in attendance, declined to give his last name, said that he worked for the Los Angeles Department of Water and Energy for 13 years and that he did not like the need to inject. something in his body to keep his job.

“I am here to show solidarity with colleagues at work who want to protect and express their physical independence,” said David. He declined to say if he was vaccinated.

Protest signs included “Vaccines Kill,” “Freedom, Not Power!” and COVID vaccines are toxic. One reading “Come on, Brandon” – the code for “F… Joe Biden” – as well as several T-shirts worn by the demonstrators. Some in the crowd wore hats advertising the extremist proud lads, and one man held a poster in support of the January 6 uprising outside the US Capitol.

The crowd without masks chanted: “Freedom! Freedom! “And” We will not obey! ” The speakers stated that their constitutional rights are being violated by mandates.

Buffalo Springfield’s 1966 protest song “For What It Worth” was played over the loudspeaker – Stop kids, what’s that sound? Everybody see what’s going on? Song it was written about clash between young men and police on the Sunset Strip.

The protesters waved “Thin Blue Line” and “Thin Red Line” flags as symbols of law enforcement support, and Los Angeles police and fire officials and other city officials were among the crowd.

Los Angeles’ mandate requires city workers to either get vaccinated by December 18 or be exempted for medical or religious reasons, while paying for regular COVID-19 testing from a city contractor.

Police said about 75% of the Los Angeles Police Department’s more than 12,000 employees had been vaccinated. However, hundreds of employees did not inform Their vaccination department last week, and thousands of others were looking for an exception.

Los Angeles Police Chief Michelle Moore said final compliance notices were to be delivered manually to most of the unvaccinated officers last week, giving them 48 hours to sign conditions or be suspended pending disciplinary action to separate them. from strength.

Chris, a 39-year-old firefighter and paramedic from Long Beach who declined to give his last name, said Monday that he was worried about staffing problems, which could be exacerbated by layoffs due to vaccinations.

“This is basic mathematics,” Chris said. “Response times will increase if they have to fire us all.”

He said the mandates were subversive and that those who institute them do not seem to understand.

“What will happen to these enterprises? [that] can’t work? ” he asked. “These politicians, who don’t understand how these regulations affect people, have no idea.”