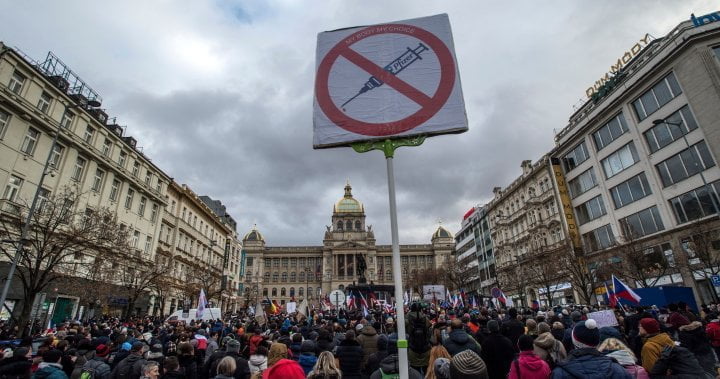 Thousands marched in the Czech Republic’s capital on Sunday to protest against mandatory COVID-19 vaccination for some groups and businesses.

Protesters gathered in central Prague’s Wenceslas Square to question the effectiveness of current vaccines and reject children’s vaccinations before marching through the capital, chanting the slogan “Freedom, Freedom”.

The previous government issued an order in early December, making vaccinations mandatory for those aged 60 and over, as well as for medical personnel, police officers, firefighters and medical students.

The order is due to take effect in March, but it could still expire.

The administration of Prime Minister Lady Babis was replaced by a new government formed by five parties later in December, which won the October parliamentary election under the leadership of Prime Minister Petr Fiala.

The new administration opposed the vaccination mandate for older people and was prepared to repeal it, but did not rule out that it may still be mandatory for some, depending on the evolution of the pandemic. The government should announce its decision in this regard by mid-February.

Anti-vaccine protesters rally in France, tell Macron: ‘We will piss you off’

The new fast-spreading Omicron version of the coronavirus was expected to take effect in the country next week by health officials.

In a country of 10.7 million, 6.7 million are considered fully vaccinated, while more than 2.8 million have received a booster shot.