Threat for travel issues as heavy snow spreads over Quebec

Friday, March 11th 2022, 9:05 am – As much as 20 cm of snow could fall over parts of southern and eastern Quebec through Saturday, as a far-reaching storm spans much of Eastern Canada.

Winter continues to win out across Quebec, and much of Eastern Canada in general, as a late season storm brings heavy snow to the region through this weekend. Persistent and intense snowfall rates could make travel difficult if not downright dangerous into Saturday, with totals possibly exceeding 20 cm in the hardest hit places. South of the St. Lawrence, snowfall amounts may drop as the snow mixes with rain, but there is also a risk of freezing rain, which could threaten road conditions as well. More on the timing and impacts, below.

Visit our Complete Guide to Spring 2022 for an in-depth look at the Spring Forecast, tips to plan for it and much more!

Widespread special weather statements blanket much of southern and eastern Quebec for a major late winter storm on tap for Eastern Canada this weekend.

A system tracking south of the region on Friday will join forces with another more potent system that will produce heavy precipitation across southern Quebec into Saturday. 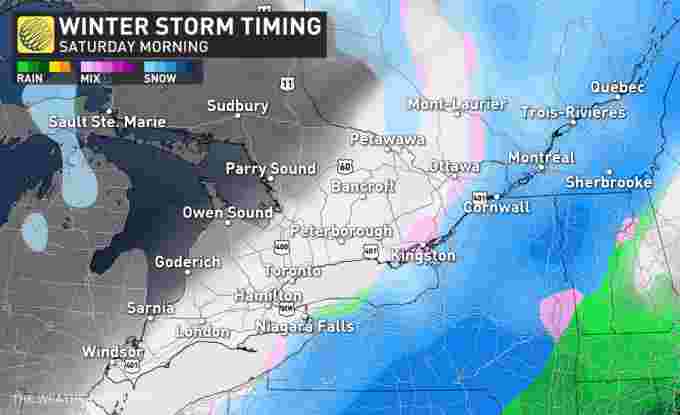 Heavy snow will persist through the afternoon hours for areas along and east of the St. Lawrence River before showing signs of easing for southern sections, including Montreal, later Saturday evening.

This will be a long-duration event that will last for 18-24 hours. Persistent snow and intense snowfall rates will threaten travel across the affected areas. The heavier snowfall rates combined with gusty winds could result in reduced visibility and even dangerous whiteout conditions. Additionally, snow may change to freezing rain overnight Saturday in parts of southern and eastern Quebec. 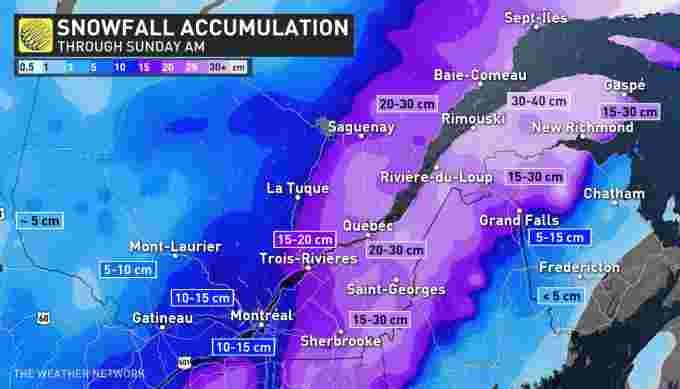 Snowfall totals have been highly dependent on the storm track, and as was a concern, the track of the first and weaker low has shifted a bit north. That has increased snowfall totals slightly for areas north of Montreal, but has also decreased overall amounts for the city itself. Still, between 10-15 cm is expected in the Montreal area.

Between 20-30 cm of snow is forecast for Quebec City, with similar amounts up to 30 cm expected across the Eastern Townships. Totals of 30+ cm are possible on the Gaspe Peninsula.

Check back for the latest weather updates across Quebec.