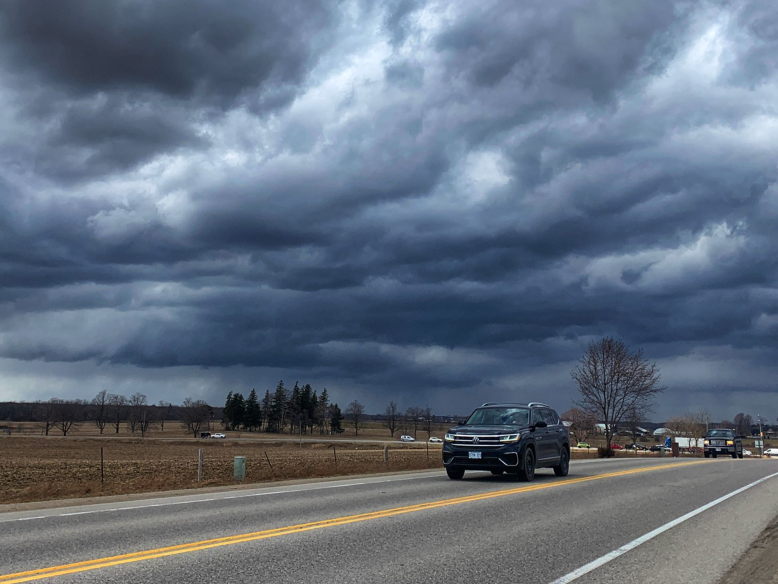 Sunday, May 15th 2022, 9:29 am – Heat, humidity and an approaching cold front may spark thunderstorms across Ontario and Quebec before the boundary sweeps away this taste of summer-like weather early this week.

Ontario and Quebec certainly got a much-deserved warm-up in recent days, but for some it may have been a bit too much, jumping right into summer-like heat, accompanied by a good amount of humidity. The good news is relief is on the way via a cold front, so temperatures will fall considerably for early this week. However, that same front could spark thunderstorms in Central Canada, perhaps reaching some severe limits, before the cooldown arrives. More on what you can expect Sunday and in the days to come, below.

DON’T MISS: 5 products to help you get ahead of allergy season

SUNDAY: LAST OF THE HEAT FOR SOME AS STORM CHANCE PERSISTS

The unseasonable heat and humidity bearing down on Central Canada will be winding down as a cold front slicing through the Great Lakes will bring relief to Ontario and Quebec early this week.

However, that same system will slowly traverse southern sections of Ontario and Quebec, acting as trigger when combined with the instability to spark scattered thunderstorms. Similar to some of the storms that fired up Saturday, any that develops Sunday could generate torrential rainfall due to the slow-moving, almost stationary, nature of the cells. Localized flooding is a threat. 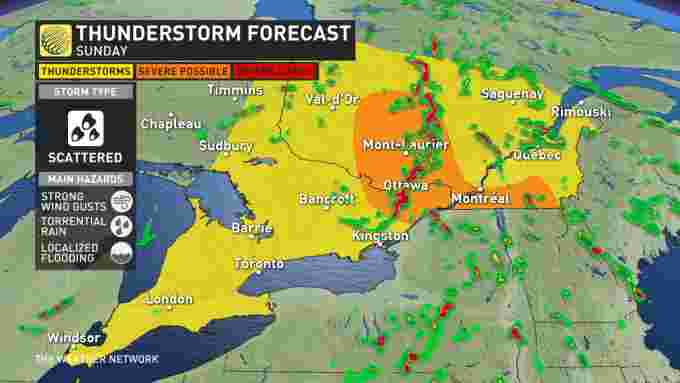 On Sunday, there may be enough instability for a few of the storms to turn severe in eastern Ontario and southern Quebec. The chance of severe storms in southern Ontario is far less likely due to the timing of the front.

Sunday’s temperature story will look similar to what we saw on Saturday across southern Ontario, though noticeably cooler in eastern sections and southern Quebec where temperatures in parts of the region will drop by five to seven degrees. 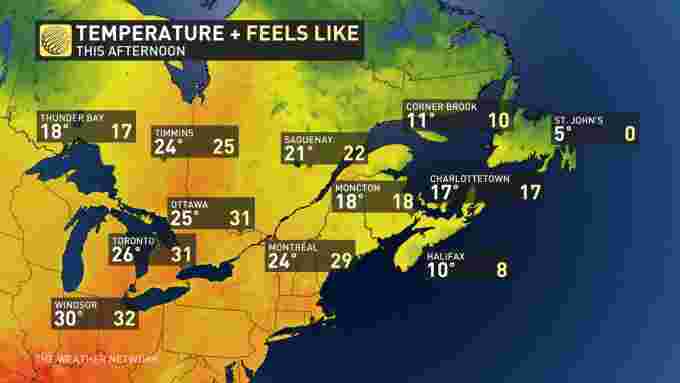 The humidity will remain in place, however, where feels-like values ​​could be into the low 30s for southern and eastern Ontario, and approaching 30 in southern Quebec.

MONDAY: DIMINISHED CHANCE FOR THUNDERSTORMS, BUT STILL THERE

Temperatures will drop a few degrees below seasonal behind the cold front, putting an end to this early tease of summertime weather. On Monday, temperatures will be noticeably cooler, dropping down to the low 20s and teens in southern Ontario. 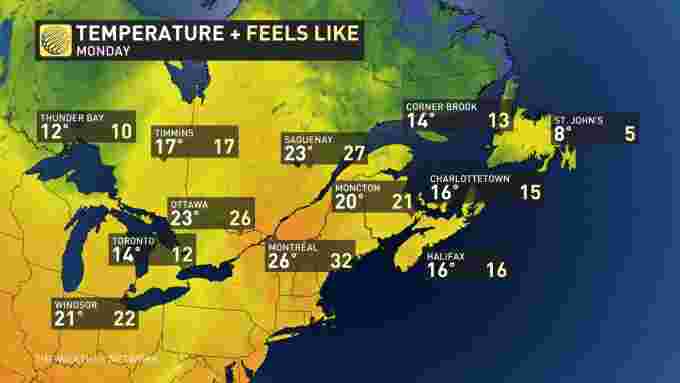 Quebec, however, will remain a bit warmer, so another day of summer-like heat with temperatures into the mid-20s and feels-like values ​​approaching or exceeding 30.

A quick round of rain will arrive across southern Ontario in time for the morning commute on Monday. The rain won’t prove to be a daylong event, but prepare for some slowdowns in the morning as commuters navigate wet roadways.

There is also the chance for thunderstorms once again, though the risk is on a much lower scale than on the weekend. The general threat stretches from southwestern Ontario, Niagara region and the Greater Toronto Area (GTA) to southern and eastern Quebec. 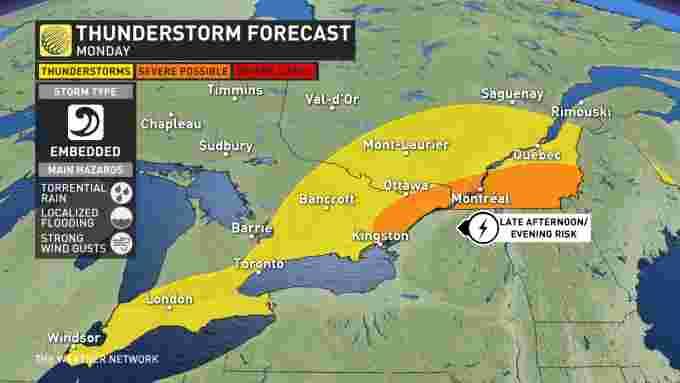 Montreal, Que., might be susceptible to some flash flooding in this setup, as storms train in from the south. Precipitable water available for storms is at 40 mm, which is why torrential rain and localized flooding are currently highlighted as the main hazards.

Temperatures falling on the cooler side of seasonal will make next week feel more like late-April than the middle of May. Daytime highs will register in the single and low double digits for most areas across the north, but mid-to-upper teens are still likely across the south. 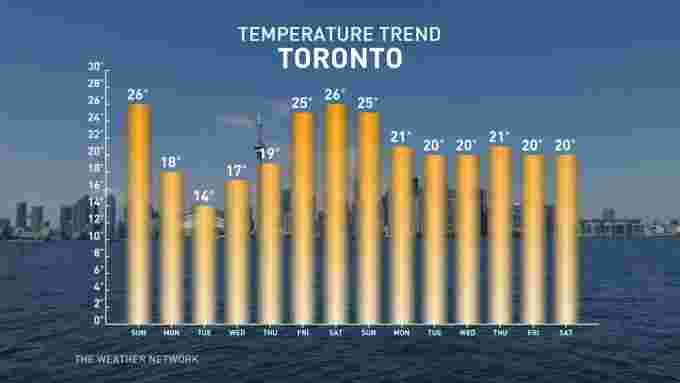 Some higher elevations in southern Ontario will even need to watch out for frost during the mid-week mornings, as temperatures creep towards the freezing mark.

For those who couldn’t get enough of the warmth, the signal is there late next week for temperatures to make a triumphant return into the upper 20s with another ridge taking shape.

Temperatures should rebound back to seasonal and possibly above seasonal for the start of the May long weekend that follows.

Be sure to check back for the latest weather updates across southern Ontario and Quebec.