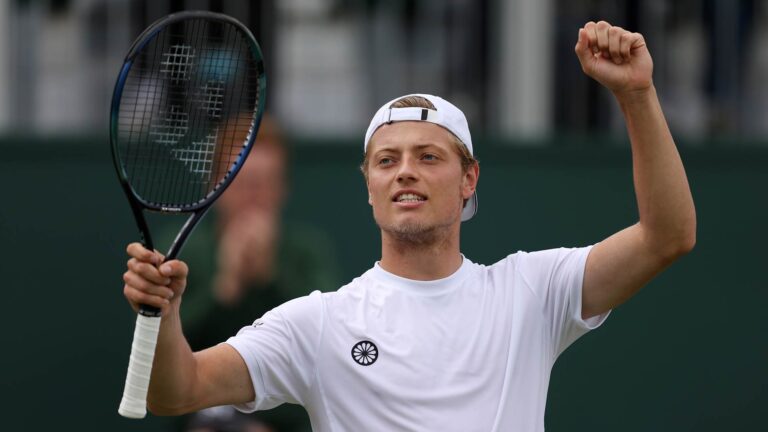 The Dutchman’s dream Grand Slam debut continued in style on Friday at Wimbledon, where he defeated 22nd seed Nikoloz Basilashvili in a resounding third-round victory 6-4, 6-3, 6-4. Currently number 104 in the Pepperstone ATP rankings, Van Rijthoven is only the seventh player since 2000 to reach the fourth round in his first main draw in a Major.

Van Rijthoven hadn’t won a tour-level match before the Liebma Open at ‘As-Hertogenbosch’ three weeks ago, but the 25-year-old won the title with a run at the ATP 250 event in his homeland, which included a victory for Taylor Fritz, Felix Auger-Aliasim and Daniil Medvedev.

He has maintained that form at Wimbledon, where the 25-year-old is competing as a wild card in the grass-court major. Van Rijthoven dropped the serve just once in his opening victories against Federico Delbonis and Reilly Opelka, and the Dutchman was again the dominant force in his third-round clash. He registered an hour, 42-minute win over Basilashvili to beat top seed Novak Djokovic or world number 30 Miomir Kekmanovic in a fourth-round victory.

“From the outside it clearly looks like a story because it came out of nowhere for a lot of people,” van Rijthoven said in a post-match press conference. “Also, the ATP title didn’t come out of nowhere for me because I didn’t win a single one” [ATP Challenger Tour] title first. I played some finals. The level there is also very high.

“But it is basically the sum of a lot of hard work, a lot of faith and ultimately a lot of positive vibes that just goes into the matches and goes into practice. It’s basically because of what’s happening right now.”

As was the case during his title race in the Netherlands, van Rijthoven’s serve proved to be a powerful weapon against Basilashvili. The 25-year-old won 88 percent (37/42) of the back of his first ball against the Georgian, giving him the freedom to stay aggressive against his opponent’s serve.

After winning the opening set with a break from a Basilashvili serve in the ninth game, Van Rijthoven found another level as three more breaks took him into the second set. The world number 104 struck the ball deeply with consistency, as Basilashvili struggled to find his rhythm in the pair’s first ATP Head2Head meeting.

Yet a more rapid return gave Van Rijthoven a 2–0 lead in the third set. On the verge of reaching the fourth round on her Grand Slam debut, however, some signs of nerves began to creep in. Five-time Tour level titleist Basilashvili took advantage of a miss from his opponent to reclaim the break, but the Dutchman bounced back. Basilashvili immediately calmed down, converting his first match point 5-4 on the serve.

“Today’s match, it was like no other match,” van Rijthoven said. “I think he’s a very strange player. Can play very well at times, can make some mistakes at times. For me it’s just to keep the ball in play and force him to play a lot of shots. Was about, basically giving him a chance to miss.

“The service I think is working wonderfully for me. I’ve only been broken last, let’s say, a couple of times in eight matches. I think because of the service I can set up my game very well.

“I like to play aggressive, like to play a lot of forehands, also like to use my slices. I think all those things are great on the grass.”