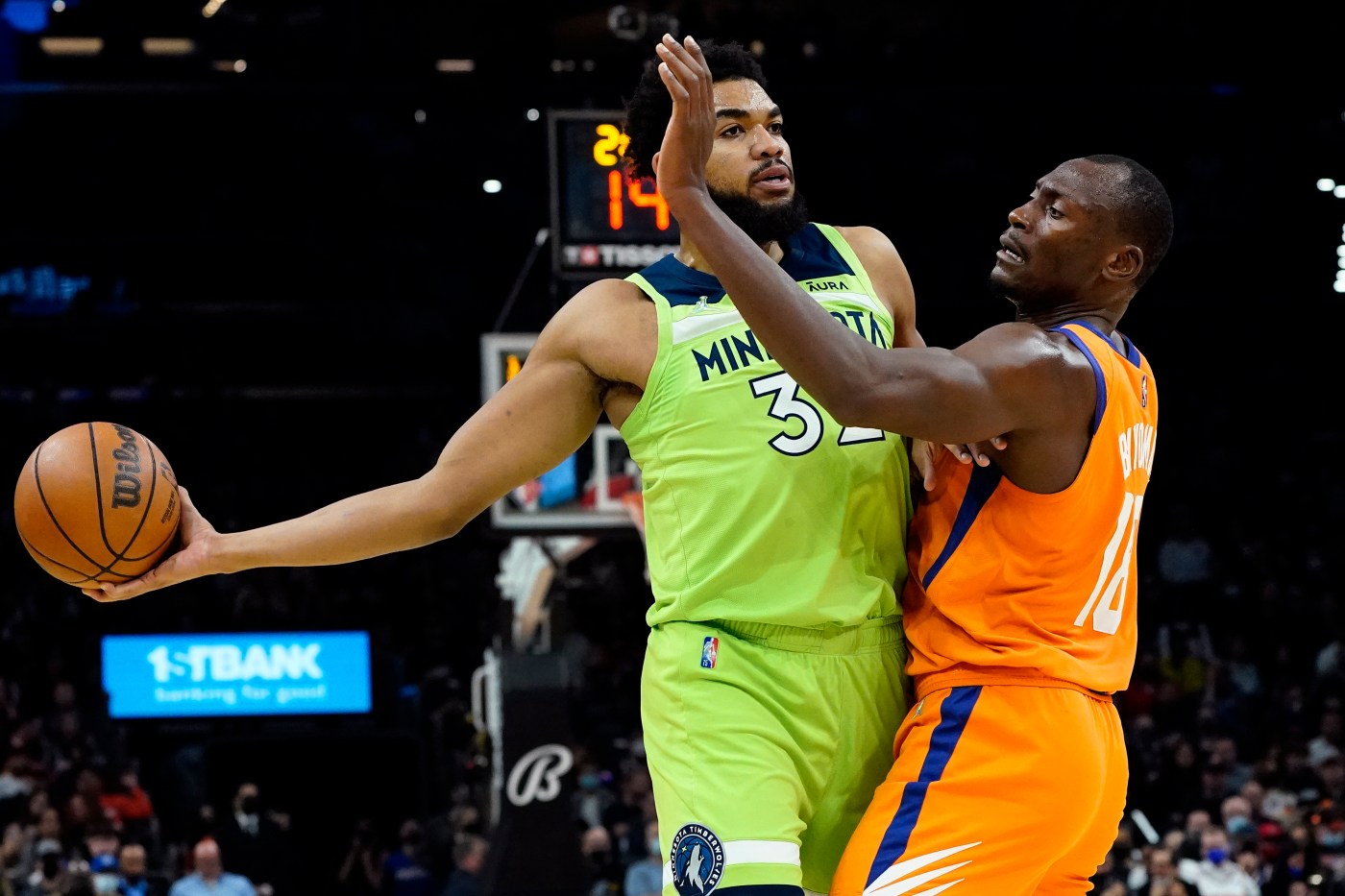 The final play was designed for Karl-Anthony Towns. Tied in Portland with seconds to play, Timberwolves coach Chris Finch designed an action to get the big man the last shot to win the game.

D’Angelo Russell was to come down to screen for Towns, who was going to pop out towards the inbounder, get the ball and go to work. But Robert Covington was stuck to Towns like glue. The backdoor lob was covered, as well. So instead, Towns made eye contact with Russell and tried to suggest the point guard get the ball instead.

Russell got the ball, got to the rim and drew the game-winning goaltending call to score the Wolves a key road victory.

Two days prior, Towns had just eight points through three quarters in last Sunday’s win over Brooklyn. He was fine with that, noting “it doesn’t have to be me every night.” Towns knows he plays with high-level scorers in Russell and Anthony Edwards.

“You’ve got to be able to lean on them,” Towns said. “They can carry the load just as well as myself.”

Then when his moment came to shine in the fourth, he delivered with 15 points to put the game away.

“Superstars show up when you need them the most,” he said.

That’s been Towns’ battle all season, deciding when to pick his spots to be aggressive and when to step aside and let his teammates go to work. Those decisions were on display all week as Minnesota navigated a difficult portion of its schedule, which continues Sunday at home against Utah.

Towns took just seven shots in the Portland win. He finished with a hyper-efficient stat line of 17 points and 17 rebounds. He controlled the interior and contributed many of the little things that go into winning.

“He was awesome in all of the non-sexy phases of the game,” Finch said.

Towns attributed the low shot count to the fact Edwards and Russell had their offense rolling. But as a whole, the Wolves didn’t. They struggled to execute against Portland’s zone defense. A few of Minnesota’s most fruitful possessions came when the 7-footer rose up over the top of the defense to drain triples. It seemed like Minnesota needed more of that throughout the night.

“Sometimes I do fall in love with making that pass and feeling like Magic Johnson,” Towns said. “Some nights I’m not going to be right. Some nights I’m going to pass too much, some nights I might shoot too much. It’s always a fine line I’m playing with.”

That contrast between the two modes of operation was evident Thursday against Golden State. Towns was the best player on the floor in the first half, lighting up Golden State’s single coverage to the tune of 23 points over the first 24 minutes.

Coming out of halftime, Golden State started to double-team him. With that in mind, Towns wanted to make a point to spark ball movement and get Minnesota playing the right way. So he attacked to pass.

He generated a number of good looks for teammates. They rarely fell. The missed shots led to the Wolves getting boat raced in the quarter en route to defeat.

That’s happened on more than one occasion this season. The Wolves have been a streaky shooting team that’s run more cold than hot. So Towns’ creation often goes unrewarded. Yet he remains undeterred in his philosophy.

There are two schools of thought when it comes to a player of Towns’ abilities. One is simply that he should dominate on a nightly basis. Joel Embiid is routinely scoring 40 points a night. Towns should do the same, whether that’s by firing up 10 3-point attempts a game or fighting through double teams to score inside. You’re your team’s best player, so act like it, and don’t let the defense dictate your performance.

Towns doesn’t see it that way. He admits he’s in a “nice zone” on offense, yet to him that means making the right play on every possession. If a team is guarding him 1 on 1, as Golden State did in the first half Thursday, then it’s his turn to take over. When Golden State adjusted, then he did, too.

That confidence doesn’t waver when those shots don’t fall.

“I love it, I love the shots they took,” Towns said. “It’s hard for me to say I would make a different play. It’s the right play, it’s to the right people.”

In the end, that’s probably the best mindset for Towns to carry. If he ever got too caught up in his personal volume, he probably wouldn’t be the best version of himself. His one All-NBA honor to date came in the 2017-18 season, in which he tallied the lowest usage mark of his career. Playing alongside other great scorers allows Towns to focus more on defense, rebounding, screening – little things that don’t draw attention but do lead to victories.

While Towns kicking out to a slumping Malik Beasley for an open 3-point attempt may frustrate fans in the moment, the “right play” mentality likely serves Towns, and the Timberwolves, best in the long run. When the intentions are good, the results tend to follow.

“Everybody wants to win, but part of the process of winning is how do you share the floor with other really talented players?” Finch said this week on The Jim Rome Show. “While our talent is young, and they’re trying to figure that out, he’s really trying to map that out, and he’s able to put up numbers in a lot of different categories and not have to be ‘the man’ every single night , even though he is ‘the man’ on our team.”