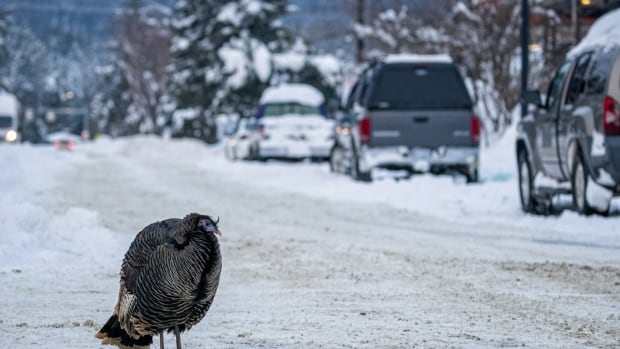 There’s a new girl in Nakusp, BC; her name is Tina, and everyone is talking about her.

Tina is a turkey who just showed up in the community one day last summer and has been the talk of the town ever since.

The people of Nakusp, which has a population of about 1,000 people, has created a Facebook page for the famous fowl to keep track of her movement.

“She kind of disappeared for a few months there, and people are getting worried about her, and one day she just showed up again as if nothing had happened, and everybody kind of breathed a sigh of relief when she came back.”

One of her favorite spots to hang out is the liquor store, where she loiters in the parking lot and hangs out near the front door.

“Some people believe she’s just waiting because she’d like to get in and get some Wild Turkey bourbon,” store manager Megan Markolli said.

Mayor Tom Zeleznik said Tina is actually keeping residents and school children safe — by walking down the middle of the highway.

“She pretty well makes sure that everybody travels the speed limits,” he said.

Nicole Thibault, who works at a local school, said she thinks Tina goes out onto the road when she thinks drivers are moving too quickly.

“She’ll walk out into the middle of the road, the trucks stop, vehicles go around her. Then when she’s decided, OK, the message has been passed on, I’m going to step off the road. If she doesn’t t think what’s going on is good, she steps back out.”

She’s also brought people together during a time where many feel isolated, even in a small town where everyone seems to know what each other is up to.

Living 50 kilometers southeast of Nakusp in Silverton didn’t stop Christina Mavinic from taking a liking to the bird.

“Tina has provided a common ground where people can start a conversation, and she immediately puts a smile on everyone’s face whenever her name is mentioned,” she said.

Mavinic said Tina’s presence in the area has brought hope during challenging times.

“I think she’s a really good messenger of just hope and love and that if we can all come together over a turkey that keeps us laughing and keeps our community working together to keep a creature safe, I think that there’s there’s still a lot of hope and love out there for us to have that for each other, too.”