Tired of waiting at US border, migrants apply for asylum in Canada 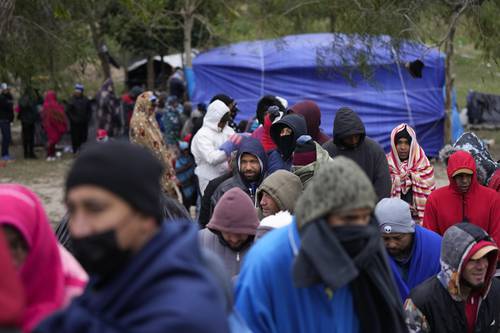 Matamoros, Tamps., Members of a migrant camp set up in Matamoros, Tamaulipas, mostly Venezuelans, asked the Canadian government to grant them humanitarian asylum.

Foreigners stationed on the banks of the Rio Grande began compiling a list of names of those who said they were tired of the United States deferring to their demands. “We think that in Canada, where there is a job offer, maybe they can give us asylum, because we don’t think we can last until February,” said Nellie Romero, who has two children and lives in the settlement. is the founder. ,

Agents of the National Institute of Migration evicted them from Tamaulipas Avenue in Matamoros, some 500 foreigners boarded Bravo, where about 3,000 people had already settled, and began building huts out of branches and plastic sheets and cardboard done.

Yesterday morning, most of the camp’s residents worked to clear open-air piles of garbage, but in the absence of toilets and showers, they must wash in the Rio Grande, the main source of drinking water in Matamoros .

Members of some families said they were prepared to endure until next February, when the US Supreme Court will define what will happen to Title 42, which allows foreigners to be deported on grounds of preventing the spread of the coronavirus. Others suggest that Bravo should cross by swimming or in improvised boats, thinking that they will avoid being deported.

On the US side of the river, the Border Patrol has doubled its surveillance efforts and increased the number of agents on foot or by four-wheeler, horse, truck or helicopter trying to block the passage of groups of migrants.

Undocumented immigrants caught by the Border Patrol are sent to a processing center at the Immigration and Customs Control Service, where they have general information, photographs, and fingerprints taken before being returned to Mexican territory.

For now, the camp’s occupants are preparing to wait out the new year, a respite after the bad weather. Last week, temperatures below minus 9 degrees Celsius forced most people to abandon their temporary homes and agree to move to two municipal shelters.