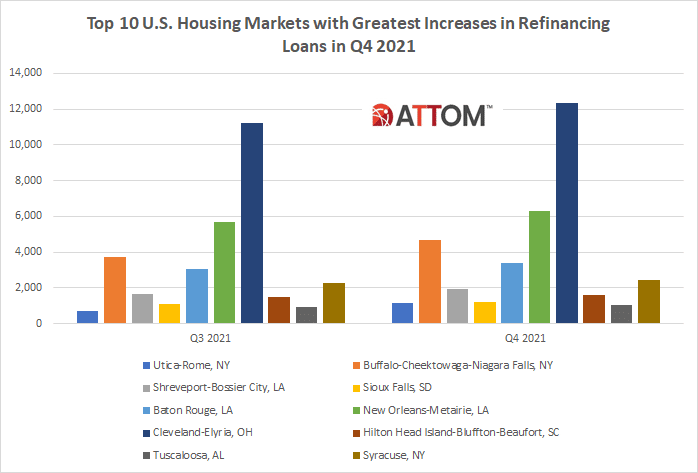 ATTOM’s newly released Q4 2021 Residential Property Mortgage Origination Report reveals that mortgage lending across the US in Q4 2021 was down for the third quarter in a row – by 11 percent from Q3 2021 and 13 percent from Q4 2020, marking the largest annual decrease since late 2018. 2018.

According to ATTOM’s most recent mortgage origination analysis, the overall drop-off resulted from across-the-board quarterly declines in all three categories of conventional loans – purchase, refinance and home-equity – with only purchase lending remaining up from Q4 2020.

The report noted that overall, there were 3.27 million mortgages secured by residential property in Q4 2021, and lenders issued $1.06 trillion worth of mortgages during that time. That dollar figure was down quarterly by 9 percent and annually by 7 percent, with both decreases in dollar volume among the largest since the early part of 2019.

ATTOM’s latest report also noted that on the refinance side, 1.81 million home loans were rolled over into new mortgages in Q4 2021. That number was also down 11 percent from Q3 2021 – marking the third straight quarterly decline – while dropping annually by 23 percent, the largest in three years.

The Q4 2021 mortgage origination analysis reported the dollar volume of refinance loans was down 9 percent from Q3 2021 and 18 percent from Q4 2020, to $578 billion. The report noted that while still a majority of residential lending activity, refinance mortgages decreased again as a portion of all loans in Q4 2021, representing 55 percent of all mortgages – down from 56 percent in Q3 2021 and 62 percent in Q4 2020.

Also according to ATTOM’s latest report, refinancing activity decreased from Q3 to Q4 2021 in 90 percent of the metro areas analyzed, dropping at least 10 percent in 47 percent of those areas. The report stated the largest quarterly decreases were in Provo, UT (down 55.3 percent); Huntsville, AL (down 52.3 percent); Pittsburgh, PA (down 46.6 percent); Hickory-Lenoir, NC (down 42.9 percent) and Peoria, IL (down 35.3 percent).

In this post, we unveil the complete list of the top 10 metros with the greatest increases in refinancing loans in Q4 2021. Those areas rounding out the top 10 include: New Orleans-Metairie, LA (up 10.4 percent); Cleveland-Elyria, OH (up 10.1 percent); Hilton Head Island-Bluffton-Beaufort, SC (up 10.1 percent); Tuscaloosa, AL (up 9.3 percent); and Syracuse, NY (up 7.0 percent).

ATTOM’s Q4 2021 residential property mortgage origination analysis also reported that despite the continued decline in refinance activity, those loans still accounted for at least half of all mortgages issued in Q4 2021 in 72 percent of metros analyzed. According to the report, that was the same portion as in Q3 2021 but down from 91 percent in Q4 2020.

The report found that among metro areas with a population of at least 1 million, those where refinance loans represented the largest portion of all mortgages in Q4 2021 included: Atlanta, GA (73.1 of all mortgages); Detroit, MI (67.2 percent); New Orleans, LA (64.3 percent); Kansas City, MO (62.3 percent) and Providence, RI (62.2 percent).

Want to learn more about residential property mortgage origination trends in your area? Contact us to find out how!

Christine Stricker is the senior marketing manager for ATTOM Data Solutions where she serves the primary media liaison for the premium property data provider. She is responsible for successfully driving ATTOM Data products, service and brand promise in the marketplace and instrumental in identifying opportunities and delivering effective strategies to generate results.