“Toros a la Tica” or the Reverse Bullfighting of Costa Rica 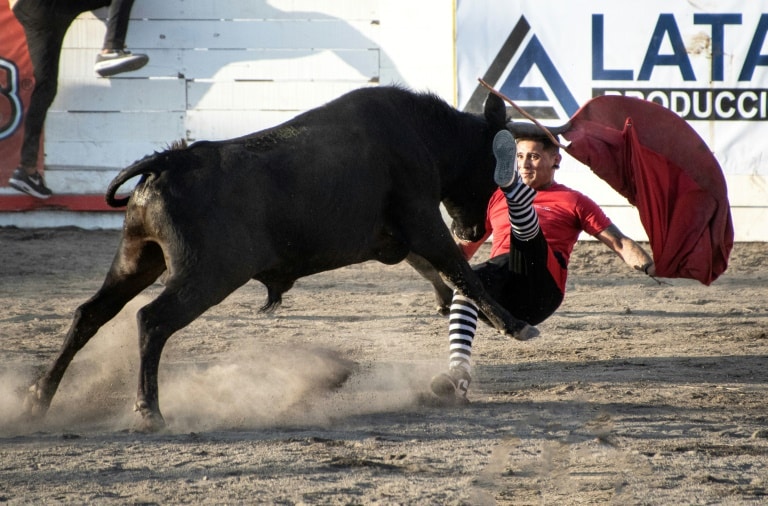 A bull comes out of the pen, goes on a rampage and throws the improvised bullfighters into the air to the applause of the public. A twist that turns bullfighting upside down in Costa Rica.

Neither matadors, nor picadores, nor banderilleros. In these year-end bullfights, the animal is not touched and applauded for catching the daredevil hoping to butcher it in the “Redondale” (bullring) arena of Zapote, a neighborhood in East San Jose with a capacity of 3,000 spectators. Is performed. ,

“Unlike bullfighting, in which the animal is harmed, here the animal is not harmed. It’s very similar to the Roman circus,” says Alvaro López, 42, the program’s producer.

People enjoy, comment and laugh while a chestnut bull of the Miura breed (renowned for its bravery) weighing about 450 kg kicks an improvised bullfighter, who slips while kicking Is.

“It’s a bull, it’s an animal you can’t control, it can hit you, it can kill you, but still, that’s what people like, what they like. Here in Costa Rica at this show In the U.S. it’s said ‘if the bull didn’t knock anyone over, the show was bad'”, confirms López.

– Forbidden to kill the bull –

The festival is celebrated in contrast to traditional Spanish bullfighting, where a matador is acclaimed for fighting a bull.

In Costa Rica, people are unaware of the improvised bullfighters, but they know the names and feats of the animals in previous festivities, because by law, bulls are not killed and can participate again in other bullrings 30 days later.

The animals are inspected before, during and after the bulls are slaughtered by members of the Veterinary Service of the Ministry of Agriculture and Livestock.

“These bulls that come here are like athletes,” López says.

Rancher Luis Collado says his bulls “play” once a month at the bullring because “the animal is cared for and protected.”

But for Juan Carlos Peralta, president of the Association for Animal Welfare and Protection, the celebration also generates “suffering” among the bulls.

Peralta says, “Now there is no excuse to say that this is tradition. They are just exploited people who continue this type of activity to profit from the suffering of animals.”

In front of the beast’s horns, several dozen improvised bullfighters provoke attacks with shouts and fuss. They don’t wear bullfighter garb, they barely have any cloaks, and the goal is clear: to run so they don’t get bullied.

Nine years ago he had a “Levantine” and a bull gored him so many times that he had to spend nine days in the hospital.

Beside him, William Portugues, a 54-year-old installer of security systems, prepares himself with the rest of the improvised bullfighters.

“It’s very dangerous, any time a bull can hit you, it can kill you,” he warns before the animal’s impending entry into the arena.

“The worst thing is that many comrades have been lost here or in the hospital through an ugly goring,” recalls Portugues after listing the broken bones in various parts of his body after the encounter with the bulls. “

Every day from 25 December to 8 January there are two bullfights a day and 20 to 30 improvised bullfighters enter the ring with the intention of goring the 10 or 12 bulls that take place in each festival. Admission is approximately $25.

The tradition dates back to colonial times and returns in 2022 after three years suspended by the coronavirus pandemic.

The return of “toros a la tica” marks the arrival of Christmas and the New Year, and according to a 2015 survey by the University of Costa Rica, 62.7% admit that they “love” these festivities.

50.2% confirm that they have ever been choked and 94.5% have seen it on television. Bullfights are broadcast live on multiple channels simultaneously as if they were football matches.