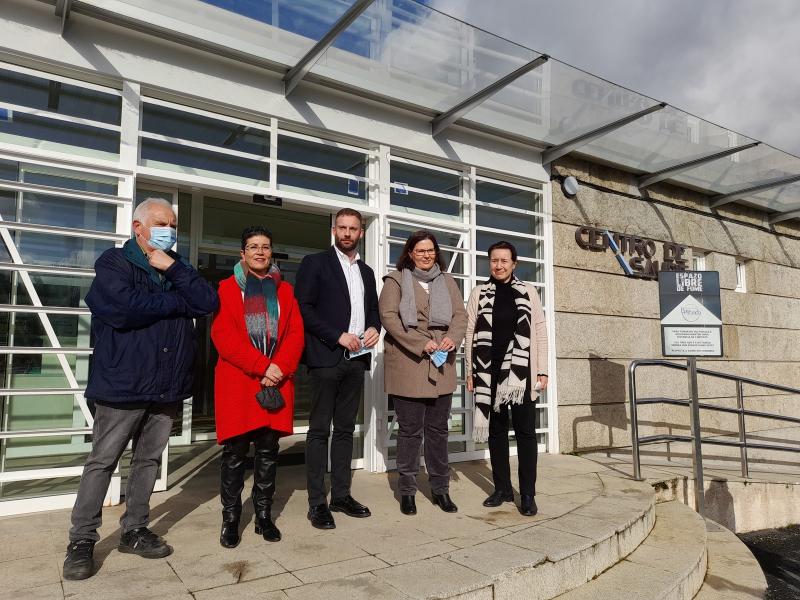 Regional Representative of the Xunta in A Coruña, Gonzalo Trenor, accompanied by the Deputy Director Doctor Of Chronic Care, Concepcion Blanco Sanchez Alejandra Pérez Máquez, from the Health Sector of A Coruña and C, and the mayor of Bergondo, visited the renovation works of the Bergondo Health Center.

executed budget was around 307,000 Euros and was result of an agreement between As Xunta and the local government it is a municipally owned building. For its part, the Municipal Council was commissioned to take necessary actions for the correct execution of the works, including the bidding and drafting of the necessary technical documentation for the execution of the works.

The works included the refurbishment of the entire roof and external carpentry, the construction of a canopy and covered access porch from the ambulance area, the cutting of the existing fence to be able to have two hinged doors in the existing metal closure nearby. In the covid rooms, in the interior painting of the entire building, in the installation of heating through heat pumps and in the adaptation to the current regulations of the electrical installation.

The Xunta de Galicia regularly collaborates with the town halls in funding improvement works in the health centers which, as such, are owned by the Galician town halls. In this legislature, the Galician government signed more than 25 agreements to provide more than 832,000 euros to improve health centers, including general maintenance costs.

therefore, since In 2017, the disbursement of funds in addition to the Local Cooperation Fund that the junta makes is forecast to offset the cost of maintenance of municipally-owned health centers.

In the 2023 budget, the Xunta once again strengthened its support for these local institutions, increasing it by 8% to 2.6 million euros. In particular, the Burgundian City Council received an amount of 24,253.14 euros to finance the maintenance of this sanitary facility in 2022.

With this, the Xunta de Galicia has allocated more than 15 million euros since 2017 to cover the operating expenses of 156 municipally owned health centers.

Since 2009, the Zunta de Galicia has built or renovated a total of 106. health centre, which meant working on over 75,000 square metres. To these should be added the 5 that are running (Lugo, Lelin, Arnoia, Ribadavia and O Porrino). In total, the regional administration invested more than 120 million Euros in primary care health infrastructure, in these 12 years.

In this sequence, and through co-financing with the legislatures, improvements were made to health centers such as Oza-Cesuras, Artexo, Cabañas, Valdovino, Malpica, Padrón, Koristenko, Si, Monferrao and A Pobra do Caraminal.

PTo continue this effort, in 2021 the Galician government approved the Primary Health Care Infrastructure Plan, which calls for the creation of 10 new health centers in the municipalities of Abegondo, A Coruña, Teo, Noya, in the case of the province of A Coruña, There is a plan. Improve and expand the health centers of Ribeira, Porto do Son, Fisterra, Ferrol and Fene and Santiago (Conxo), Culleredo and Carballo to turn them into a comprehensive health center.