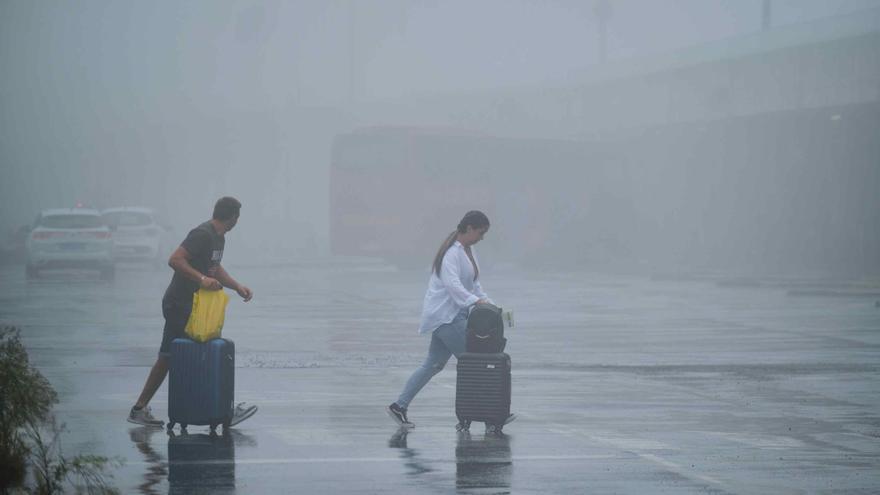 Tropical Storm Hermine – converted to a tropical depression upon arrival in the Canary Islands – “saved” on the edge Hydrology Year in the Islands. before events heavy rain In late September, rainfall was barely 70% of normal, leaving the archipelago experiencing severe drought. However, its direct impact was only a few days before the end of the hydrological year. Hermione It sets all-season rainfall records, helping to ameliorate the precarious state of reservoirs, although it does not reverse. In fact, this new hydrological year begins with new deficits, as only 18% of normal rainfall has been received.

Autumn in the islands was a “variable” period. That’s what Victor Quintero, the provincial representative of the State Meteorological Agency in the Canary Islands (AIMET), said in his assessment for the autumn of 2022. a period, as he outlined, characterized by abrupt oscillations between periods of cold and “warm” final thermal behavior autumn has been warm and even very warm“, highlighted Quintero. Notably, the thermometer in the quarter marked an average of 20.8 degrees with a thermal discrepancy of 0.9 degrees. Such high temperatures were especially recorded from mid-October, as the values ​​during September Other years were within the average.

The average temperature for the quarter was 20.8 degrees, almost one degree above normal

The sweltering heat helped break several records at weather stations. In Izana (Tenerife) stands the high mountain station, which broke two records: the highest temperature of the month at 10.7 °C and the highest monthly average maximum, 14.1 °C. It should be remembered that the high mountains in the Canary Islands are the only ecosystems that are more acutely affected by the effects of climate change. In fact, around Tide, the temperature rose 1.5 degrees, 0.3 degrees above the global average. High temperature records were also broken at various stations in Lanzarote, La Palma and Gran Canaria.

However, “there have also been places where the fall has been cooler than normal,” Quinto said. This is the case north of Tenerife, north-west of Gran Canaria and La Palma. On this side of the three islands, the arrival of weak fronts caused the quarter to enjoy near-normal or even below-normal temperatures. Also in Lanzarote and Fuerteventura, low temperature records were recorded in several seasons induced by the passage of Hermine.

With regard to the rainfall character of autumn, it has been very moist. Overall, the average rainfall was 120.6 liters per square metre, which is 148% above normal. But as Quinto stressed, this circumstance is entirely Arrival of Hermine, In fact, while September recorded rainfall that was four times (500% more) than normal, October received only 30% of normal and November only 10%. In this way, this month of September has become the rainiest month in the Canary Islands in the last 60 years.

The passage of the tropical depression allowed several areas of the Canary Islands to have above normal values, leading to very unusual patterns such as the presence of green blankets on the southern slopes. This has been the case throughout the Canary Islands, with the exception of the northern slope, which has the same amount of accumulated rainfall as ever, and east of La Palma, which has received less than normal rainfall. This extraordinary episode led more than half of meteorological stations (57%) to break monthly rainfall records, including La Palma Airport (187.3 liters per square metre), Tenerife South (108.6) or Santa Cruz de Tenerife (107.4 ).

Because of her characteristics, Hermione was an extraordinary phenomenon. “While it is true that many cyclones form between Africa and Cape Verde, they usually move west,” Quintero explained. With this displacement they usually gain importance and become tropical cyclones or even hurricanes that eventually affect the East Coast of the United States. On this occasion, however, the cyclone deviated significantly from its normal path. Its turn to the north – something that surprised the scientists who were monitoring the event at the time – made it easier to reach the Canary Islands, but also easier to do so with less force. “Because it moved so quickly, it didn’t develop into such a powerful system, it was already extratropical,” insisted Quinto, who acknowledged that the heavy rains had a “positive effect” because they were “intense and persistent.” ” Were.

There are other indicators that reflect the unique autumn experienced by the Canary Islands. For example, as far as cloud cover is concerned, it has been much less than normal. This has been the least cloudy autumn since 2004, at 9% of the average. The archipelago has also experienced dense smog during the fifth of October of the year.

This winter is likely to be longer wet (40%) what dry However, with respect to temperature, the probabilistic models are not clear whether it will be warmer or warmer than normal. It is clear that, starting next week, a storm will pass through the Canary Islands, causing heavy rains, although “it will not be a particularly intense episode for the time being.” On the 26th, the storm will create a cocktail of instability marked by heavy rain, a sudden drop in temperature and the first snow of winter over La Palma and Tenerife. It won’t be the only thing, Lanzarote and Fuerteventura will also have an intense injection of smog.

“Dana will become a storm for the western islands, but it will also create a flow from the southeast to the African continent that will facilitate the penetration of haze into the eastern islands,” the scientists emphasize. In theory, this structure will affect the Canary Islands during the 26th and move south over the following days, “ceasing to affect the islands.” Although these are still provisional figures, forecasts for the first week of January suggest that the Canary Islands will once again be affected by several storm surges from the north of the planet. This was stated by Hervela, who indicated that from January 2 to 9, warm conditions would prevail over a good part of the peninsula and that the Canary Islands would receive above normal rainfall.