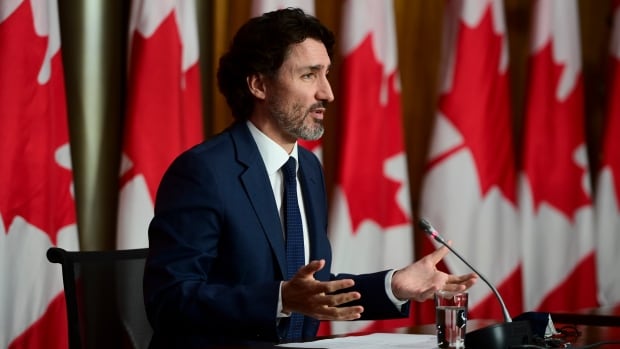 Prime Minister Justin Trudeau urged provinces today to maintain strict public health measures until COVID-19 case counts are much lower than they are now — so that Canadians can enjoy a “one-dose summer.”

Speaking to reporters at a COVID-19 briefing, Trudeau said that with the steady supply of vaccines now streaming into the country, there will be enough shots to immunize every eligible Canadian with at least one dose by the end of June.

But vaccinations alone will not crush the third wave stretching the country’s health care system to its limits, he added.

Trudeau said tough public health restrictions, like the lockdowns in Ontario, should be kept in place for the foreseeable future to drive COVID-19 case counts to more manageable levels.

Dr. David Williams, Ontario’s chief medical officer of health, said Monday the number of new cases reported daily in the province needs to be well below 1,000 before he can recommend lifting restrictions.

Ontario reported 2,073 new infections today. Alberta — the province with the largest per capita case count in the country — reported 1,597 new cases over the last 24 hours.

‘We can have a better summer’

Continued restrictions throughout May and early June, combined with a strong vaccine uptake, will allow Canadians to enjoy something like a normal summer, Trudeau said.

“We all know, in some places, cases are really high. We can’t ease public health restrictions until cases are way down. We all want to have a summer where we can see our loved ones and invite our friends over for BBQs, Trudeau said.

“We can have a better summer, a one-dose summer.”

Pointing to modeling data from the Public Health Agency of Canada, Trudeau said provinces should begin to lift public health restrictions only once 75 per cent of the adult population has had at least one vaccine dose.

WATCH: Trudeau urges Canadians to get their first vaccine

Trudeau urges Canadians to get their first vaccination

Some provinces are on track to do that before Canada Day — but reaching that goal will require most Canadians to roll up their sleeves for a jab when their turn comes.

“We need to crush COVID right across the country,” Trudeau said.

The prime minister said easing lockdowns and other restrictive measures too soon would only lead to another wave of COVID-19 cases that would disrupt the country’s progress on vaccinations. According to federal data, 40 per cent of the adult population has had one shot already.

Trudeau said that a one-dose summer would be followed a “two-dose fall,” when many more Canadians will have access to a second booster COVID-19 shot.

Trudeau said he’s “excited” to think about a future when vaccines are plentiful and COVID-19 outbreaks can be managed through contact tracing and targeted measures, instead of indiscriminate closures. Getting there will require continued “vigilance” so that provinces “can get the new cases totally under control,” he said.

In question period in the House of Commons today, Conservative health critic Michelle Rempel Garner said the prime minister’s promise of a “two-dose fall” will leave many Canadians wondering when exactly they’ll get their second doses, and whether they’ll fall within the 16-week time frame recommended by the National Advisory Committee on Immunization (NACI).

For some recipients, a second appointment in the fall would be well past the four-month interval recommended by the vaccine advisory panel, Rempel Garner said.

“Many Canadians may now be wondering … if this means a longer period of lockdowns due to delayed vaccines,” she said. She asked Health Minister Patty Hajdu to give an exact date when all Canadians can expect to be fully vaccinated.

Hajdu didn’t answer the question but said Canada is now administering more COVID-19 doses daily than any other country in the G7.

“We can see the finish line,” the minister said.

Tam has suggest provinces should follow a formula before easing lockdowns: 75 per cent of population should have at least one shot with at least 20 per cent fully vaccinated with both doses.

The only way to beat back the virus once and for all is to get a critical mass of Canadians vaccinated, Tam said.

Speaking to reporters before Ontario announced it was suspending the use of the AstraZeneca product for first doses because of the risk of vaccine-induced thrombotic thrombocytopenia (VITT), Tam said Canada will procure enough doses of that vaccine to give everyone who got a first dose a second shot of the same product.

Concerns have been raised about rare blood clotting events in people who have received the AstraZeneca vaccine. Tam said other options could be made available to Canadians based on the results of an ongoing UK study.

Oxford University is studying a “mismatched” vaccine regimen to test the results of giving one dose of AstraZeneca followed by a Pfizer booster shot.

While the trial data have not yet been released, some scientists have suggested such a mix could produce a stronger immune response than two doses of the same product.

Dr. Theresa Tam, Canada’s chief public health officer, says the government will ensure that people can get their second doses of AstraZeneca’s COVID-19 vaccine and Health Canada will continue to review studies on mixing vaccines. 1:34

“We are following the evolving science to provide the most up-to-date advice on whether a mix of schedule is the appropriate way to go,” Tam said.

The federal government “will continue to monitor” the AstraZeneca safety and supply situation — the next delivery dates for this product have not yet been finalized — but it will ultimately be up to the provinces to “make determinations about the exact details of their vaccine rollout , Trudeau said.

Most of the 2.2 million AstraZeneca doses that have been delivered to Canada have been deployed already and it’s not clear when the next batch will arrive.

Facing this supply crunch, Alberta Health Services said Tuesday it will hold back the few AstraZeneca shots it has left — there are only 8,400 doses remaining — for second shots.

He said the province is waiting for guidance from NACI before proceeding with second doses for AstraZeneca recipients.

“More AstraZeneca could be given as a second dose or we could mix vaccines if the studies agree,” he said. “In Quebec, we are happy and we have succeeded and people are protected with AstraZeneca,” he said.