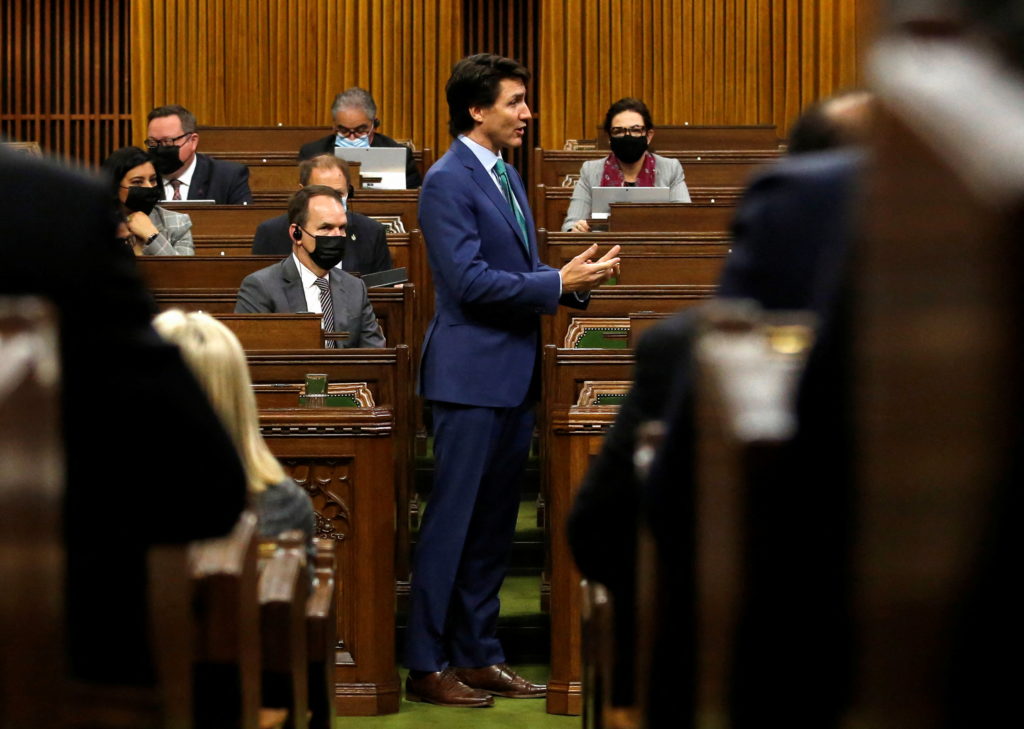 OTTAWA, Ontario (AP) — Police poured into downtown Ottawa on Thursday in what truckers feared was a prelude to a crackdown on their nearly three-week, street-clogging protest against Canada’s COVID-19 restrictions.

Work crews in the capital erected fences outside Parliament, and for the second day in a row, officers handed out warnings to the protesters to leave. Busloads of police converged on the area in the morning.

“It’s high time that these illegal and dangerous activities stop,” Prime Minister Justin Trudeau declared in Parliament, not far from where the more than 300 trucks were parked.

Many of the warnings in the self-styled Freedom Convoy reacted to the warnings with scorn. As of midday, the vast majority appeared to be staying put.

“I’m prepared sit on my ass and watch them hit me with pepper spray,” said one of their leaders, Pat King. As for the big rigs parked bumper-to-bumper, he said: “There’s no tow trucks in Canada that will touch them.”

Ottawa represented the movement’s last stronghold after weeks of demonstrations and blockades that shut down border crossings into the US, inflicted economic damage on both countries and created a political crisis for Trudeau.

The protests have shaken Canada’s reputation for civility and rule-following and inspired similar convoys in France, New Zealand and the Netherlands.

Early this week, the prime minister invoked Canada’s Emergencies Act, empowering law enforcement authorities to declare the blockades illegal, tow away trucks and punish the drivers by arresting them, freezing their bank accounts and suspending their licenses.

On Thursday, Trudeau and some of his top ministers took turns strongly warning the Ottawa protesters to leave or face the consequences, in an apparent move by the government to avert a clash, or at least show it had gone the extra mile to avoid one.

Deputy Prime Minister Chrystia Freeland said the government had begun freezing truckers’ accounts as threatened. “It is happening. I do have the numbers in front of me,” she said.

Ottawa police likewise handed out leaflets on both Wednesday and Thursday telling the truckers to end the siege, and also helpfully placed notices on vehicles informing owners how and where to pick up their trucks if they are towed.

The occupation has infuriated many Ottawa residents.

“We’ve seen people intimidated, harassed and threatened. We’ve seen apartment buildings that have been chained up. We have seen fires set in the corridors. Residents are terrorized,” said Canadian Public Safety Minister Marco Mendicino. “And it is absolutely gut-wrenching to see the sense of abandonment and helplessness that they have felt now for weeks.”

The protests around the country by demonstrators in trucks, tractors and motor homes initially focused on Canada’s vaccine requirement for truckers entering the country but soon morphed into a broader attack on COVID-19 precautions and Trudeau’s government.

The biggest, most damaging of the blockades at the border took place at the Ambassador Bridge between Windsor, Ontario, and Detroit. Before authorities arrested dozens of remaining protesters last weekend and lifted the siege, it disrupted the flow of auto parts between the two countries and forced the industry to curtail production.

The final blockade, in Manitoba, ended peacefully on Wednesday.

The movement has drawn support from right-wing extremists and veterans, some of them armed, and authorities have hesitated to move against them, in part out of fear of violence.

Fox News personalities and US conservatives such as Donald Trump have egged on the protests, and Trudeau on Thursday that “roughly half of the funding to the barricaders here is coming from the United States.”

Some security experts said that dispersing the protest in Ottawa could be tricky and dangerous, with the potential for violence, and that a heavy-handed law enforcement response could become propaganda for anti-government extremists.

The trucks were parked shoulder-to-shoulder downtown, some with tires removed to hamper towing. Some were said to be chained together. Police were especially worried about the children among the protesters.

“There is not really a playbook,” said David Carter, a professor at Michigan State University’s School of Criminal Justice and a former police officer. “I know there are police chiefs in the US looking at this and developing strategic plans and partnerships to manage a protest like this if it should occur in their cities.”

As tensions rose on Thursday, Canadian Emergency Preparedness Minister Bill Blair said: “To those who have children with them, this is no place for children. Take them home immediately.”

5 disadvantages to following your passion

NHL shortens some isolation requirements while adhering to CDC guidelines