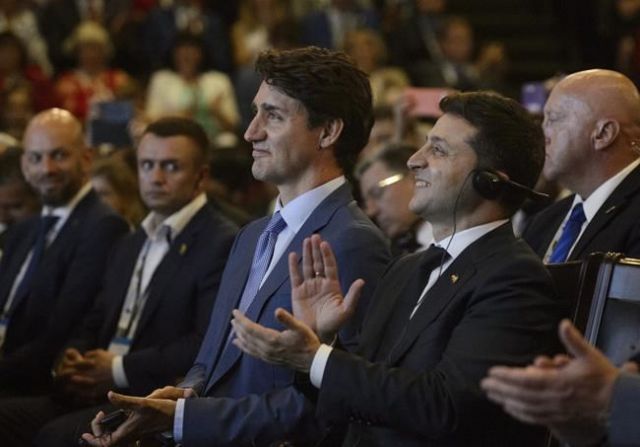 Prime Minister Justin Trudeau said on Wednesday that Russia could face further Western sanctions as a result of its military build-up on Ukraine’s border.

And Trudeau appeared to confirm that Canada would renew its modest commitment of 200 Canadian military personnel to a military training mission in Ukraine, amid rising tensions between the West and Russia.

The Ukrainian government is waiting for Canada to publicly renew a commitment that expires in late March, as part of a show of NATO solidarity towards Russia at a time of rising tensions.

Trudeau noted Canada’s contributions to NATO on its Eastern Front, which are part of a 30-nation coalition effort to counter Russian military gathering on the European border. These include Canada’s command of a NATO battlegroup in Latvia with more than 500 troops, as well as a mission to train Ukrainian troops operating under the name Operation Unifier.

Trudeau said, “We are all deeply concerned about this and are united as allies around the world to de-escalate Russia and signal that further aggressive action by Russia could be as important as sanctions.” There will be consequences.”

Ukraine’s President Volodymyr Zelensky renewed his call for expanding Canadian contributions to the military mission in his country during a phone conversation with Trudeau on Tuesday.

“We are proud that Canada is leading a NATO mission in the Baltic states in Latvia. We are part of Operation Unifier on the ground in Ukraine, training Ukrainian troops. We stand as part of our NATO allies. Will remain there for friends in the area,” Trudeau said.

Trudeau said his call with Zelensky was “excellent”, during which he reiterated “Canada’s longstanding support and friendship for Ukraine” and “condemned in no uncertain terms the Russian invasion and creation of troops.”

Ihor Michalchishin, executive director of the Ukrainian Canadian Congress, welcomed the news that Canada would expand the training mission to Ukraine. But he called on the government to impose a much tougher set of sanctions on Russian officials under Canada’s Magnitsky Act law, which targets human rights offenders.

Canada has imposed sanctions on Russia under a different regime known as the Special Economic Measures Act in response to the Kremlin’s annexation of Ukraine’s Crimean peninsula in 2014.

“Canada has lagged behind in the implementation of US and EU sanctions; there has been no meaningful sanctions action by Canada against Russia in two years,” Michalchishin said.

Talks between NATO leaders and Russia ended in Brussels on Wednesday, as Moscow gathered 100,000 troops near Ukraine’s border in an effort to find a solution to the standoff, raising fears of an invasion.

Russia wants NATO to reject Ukraine’s bid to join a 30-nation military alliance, a demand explicitly rejected by NATO and the United States.

NATO Secretary-General Jens Stoltenberg said after a NATO-Russia meeting on Wednesday that both sides would set more dates to continue talks, but the road ahead would not be easy given Russia’s demand that the alliance halt its eastward expansion. Give.

‘They kill women and feed dogs’: Talents’ brutality in hunting

Mann Ki Baat: Prime Minister Modi said on Mann Ki Baat program – Dhyan Chand must be happy with the performance of the hockey...