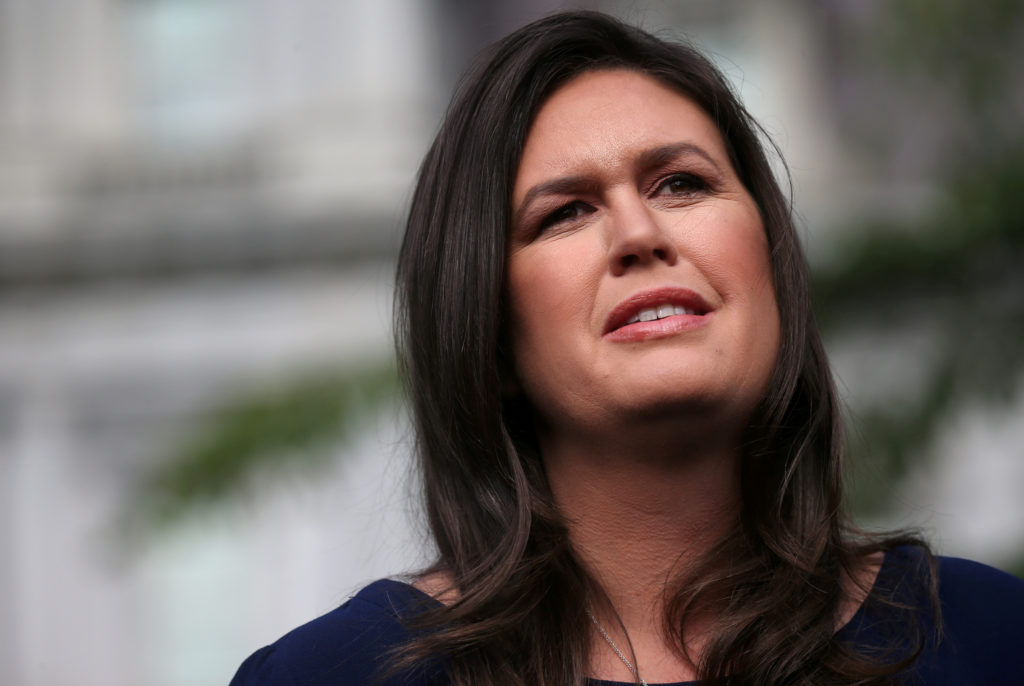 Sanders was endorsed by her former boss, former President Donald Trump, and shattered fundraising records since entering the race last year. Sanders, the daughter of former Gov. Mike Huckabee, blanketed the state with ads going after Biden on issues like inflation and vowing to fight the “radical left.”

“As governor, I will say no to Biden and the radical left’s agenda,” Sanders says in one of her TV ads.

Sanders, accompanied by her husband and three children, cast her ballot in Little Rock shortly after polls opened Tuesday.

As Trump’s spokesperson, Sanders was the face of an administration that contributed to the nation’s stark divide. She’s running at a time that Republicans around the country are adopting the president’s rhetoric and approach on a number of issues, including immigration policy and the way race is taught in schools.

During Sanders’ nearly two-year tenure at the White House, she scaled back daily televised briefings after repeatedly sparring with reporters who aggressively questioned her. She faced questions about her credibility, particularly after special counsel Robert Mueller’s report revealed that Sanders admitted making an unfounded claim to reporters about FBI agents’ reaction to director James Comey’s firing. But she also earned reporters’ respect working behind the scenes to develop relationships with the media.

Jones launched his campaign for the Democratic nomination last year with a video that quickly went viral and contrasted with Sanders’ rhetoric.

“I wasn’t born into politics,” Jones said in a recent TV ad. “My parents raised me to care about people.”

If none of the Democrats wins a majority of the votes, the top two will face each other in a June 21 primary runoff.

The candidates are running to succeed Republican Gov. Asa Hutchinson, who is barred from seeking reelection because of term limits and is considering a run for president in 2024. Hutchinson endorsed Sanders’ bid after her two chief rivals for the nomination, Lt. Gov. Tim Griffin and Attorney General Leslie Rutledge, dropped out to run for other offices.

Trump publicly encouraged Sanders to run for governor when she left the White House in 2019 to return to her home state.

Sanders was already well known in Arkansas politics, going back to when she appeared in ads for her father’s campaigns. She managed Sen. John Boozman’s 2010 campaign and worked as an adviser to Sen. Tom Cotton’s in 2014. She’s appearing in ads endorsing Boozman’s reelection bid as he tries to fend off challenges in Tuesday’s primary.

Sanders has run on a promise to phase out the state’s income tax, though she’s stopped short of giving a timeline for doing so or offering details on how she’d pay for the loss in revenue.

Before jumping into the governor’s race, Jones headed the Arkansas Regional Innovation Hub, a nonprofit that helps entrepreneurs. He has dubbed his platform “PB&J,” which he says stands for preschool, broadband and jobs.

Polly Harper, a 77-year-old retiree from Little Rock, cited Sanders’ experience at the White House as a reason she was backing her in the GOP primary.

“I think she was competent, she was cool-headed,” Harper said before casting her ballot. “She was conservative. She just didn’t get flustered. She was level-headed and responsible.”

Donna Chachere, a systems developer from Little Rock, said she voted for Jones in the Democratic primary because she felt like he would have the best chance in the fall.

“Even if his numbers are a little significant, maybe next time it would encourage more to vote outside the traditional politician here in Arkansas,” she said.

Open post: Hosted by woman who fell into an outhouse trying to retrieve her dropped phone and had to be rescued