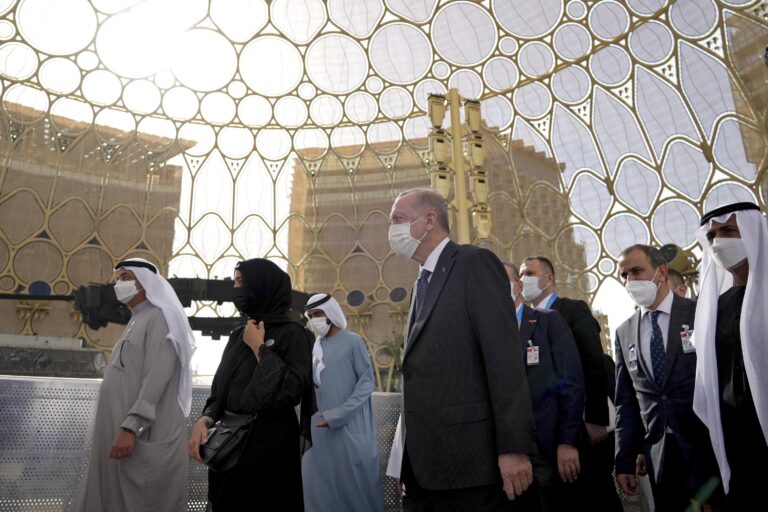 The new page in UAE-Turkey relations points to a wider reset in regional strategies following a decade of strained ties and proxy wars that played out between the two countries. Turkey’s support for Islamists during Arab Spring protests roiled Abu Dhabi’s leadership, which views the Muslim Brotherhood and its offshoots as an existential threat to its style of autocratic hereditary rule. So deep was their animosity that Ankara suspects the UAE backed a network behind the failed coup targeting Erdogan in 2016.

In other signs of a political shift, Erdogan has plans to visit Saudi Arabia sometime in February following a deep strain in ties and will welcome Israel’s president next month.

The pomp and Turkish flag-waving cavalry that greeted Erdogan a day earlier for his meeting with Abu Dhabi Crown Prince and de facto leader, Sheikh Mohammed bin Zayed Al Nahyancontinued on in Dubai, which positions itself as the UAE’s globally alluring tourism and finance hub.

Erdogan was greeted by Dubai ruler and UAE Prime Minister Sheikh Mohammed bin Rashid Al Maktoum at the emirate’s multibillion-dollar Expo site to celebrate Turkish culture and history at the World’s Fair. Visitors at Expo were given Turkey’s red and white crescent-and-star flag to wave as Erdogan toured Turkey’s pavilion following a Turkish musical performance under the fair’s main dome. Standing before a select audience, Erdogan praised the UAE for being the first Arab country to host the World’s Fair.

It’s a stark pivot from only a year or so ago, when it was anyone’s guess whether Turkey would even have a presence at Dubai’s Expo. As relations soured, prominent officials and government supporters from both sides traded jabs and insults over social media and in state-aligned press outlets.

Now, these same social media accounts are tweeting under hashtags hailing the renewed ties, sharing videos of Emiratis speaking Turkish and championing a performance in Turkish by the Emirates’ most famous singer Hussain al-Jasmi at the piano. The world’s tallest tower, Dubai’s Burj Khalifa, lit up in the colors of the Turkish flag to mark Erdogan’s visit while commuters on Dubai’s main highway drove under a sign praising the bilateral ties.

Senior Emirati diplomat and advisor, Anwar Gargash, noted on Twitter that the warm reception Erdogan has received a result of the “fruits of the hard work undertaken by the UAE to promote an agenda of stability and prosperity.”

The reset in ties was undertaken by the UAE following a Saudi-led rollback last year of an unprecedented and largely unsuccessful embargo of Qatar over its support for Islamists in the region and its ties with Iran. Qatar was supported by Turkey, which beefed up its troop presence in the country. Like Iran, Turkey hastened to support the tiny but wealthy gas-rich Gulf Arab state with essential imports in the first days of the economic and political boycott.

The rebuilding of ties with Turkey signals a wider UAE strategy to use economic cooperation, and its oil wealth, as a main tool to recalibrate its foreign policy posture, particularly in the face of continued tensions with Iran and a new administration in Washington seeking to re -enter nuclear talks.

For Erdogan, it comes as Turkey faces an economic crisis and a depreciating currency. Help could come in the form of more Gulf Arab tourists. Dubai’s low-cost carrier flydubai announces Tuesday it would expand the number of flights to Istanbul from seven to 12 per week.

Speaking to investors and business people in Abu Dhabi, Erdogan said Turkey and the UAE had a “common will” to increase trade and investments, following the signing of 13 agreements Monday. Erdogan said the UAE was Turkey’s top trade partner in the Gulf.

“Even during the period when our bilateral relations experienced a pause, our commercial relations retained its volume and partnerships of our private sectors maintained their vitality,” he said.

The UAE had agreed in January to a currency swap deal of nearly $5 billion to boost Turkey’s depleted foreign exchange reserves. During the Abu Dhabi crown prince’s breakthrough visit to Turkey last fall, Emirati officials said the UAE would set aside $10 billion for investment in Turkey.