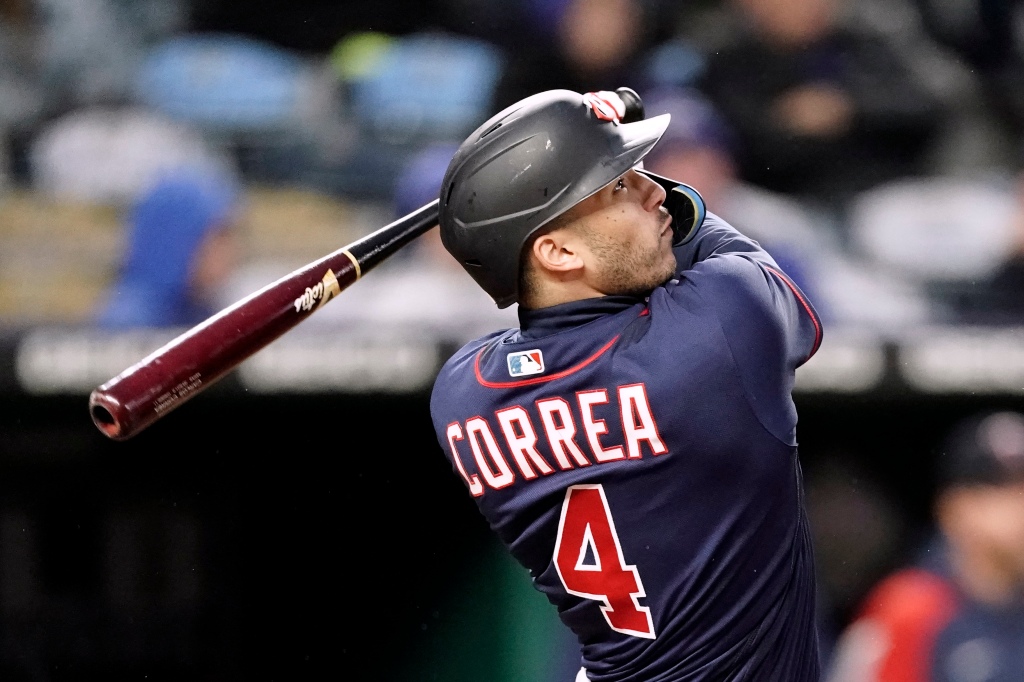 Carlos Correa will be forced to watch his former teammate from the dugout this week as the shortstop was added to the 10-day injured list on Tuesday ahead of the first of the twin series against the Houston Astros.

Correa is still recovering from a right middle finger injury he suffered on May 5 in Baltimore after fouling a ball with his hand. He pushed for a comeback against Houston, but his finger bone injury did not heal quickly and he could not hit or throw without “a lot of pain” on Monday. Acting manager Jayce Tingler said he “took it down as far as we could before we had to take any steps.”

“Really upset, man. I was really trying.” Correa spoke of returning for the Houston series. “But I’ll take a week or 10 days in 8-10 weeks. I definitely dodged a bullet in there, and I have to be smart about it. ,

Correa said he hopes to prepare for a road trip from Minnesota to Oakland, which begins Monday. And when he was not available to play, he spent a lot of time chatting with former teammates and coaches.

“I’m so glad I got to see him again, get to spend some time with him,” he said. “They weren’t teammates. They were family.”

Correa has spoken fondly of the Astros since arriving in Minnesota, saying that he still checks on his performance every day, even calling on former teammates for advice. That’s when they’ve fought.

“I’ve always had that connection with them, and I’ll always have that bond with my ex-partners. Especially because they’re not in-Division. If they were in The Division, it would have been a different story.”

Korea will have to wait until August to officially play against them. The Twins travel to Houston for a three-match series on August 23-25.

Paddack is also the head of IL.

Korea is not the only notable name on the injured list. Starting pitcher Chris Paddack (swelling of his right elbow) was also added to the injured list for 10 days, and his injury could have kept him out for longer.

Paddack is still waiting for a full diagnosis from doctors, but he has struggled with this type of injury in the past. Paddack said the injury felt “largely” similar to the UCL sprain he suffered last season in September, which saw him shut down for the season, although scans have yet to reveal the injury. This time it’s the same.

He didn’t have surgery after a UCL sprain last season, opting for a stem-cell procedure that made him feel well through spring training and the first four starts of the season. However, he is ready for surgery this time if the imaging reveals anything serious.

“Unfortunately at this point in my career, if it’s torn, or anything crazy like that, I think I’m going to go ahead with surgery. Just because if I got stem cells I’d be able to go through this season.” Will miss most of the part already,” Paddack said.

Paddack has made five starts for Minnesota this season, leading 1-2 with a 4.03 earned run average. He was dropped in the third inning of his last debut against the Oakland Athletics.

Read Also:  10 prospects who improved their draft stock at the Senior Bowl

“It’s crushing to see him pass by,” Tingler said. “We’ll have to wait and see where the inflammation happens, what’s the next step in the process.”

To replace Correa and Paddack on the 26-man roster, the Twins have selected the contracts of outfielder Mark Contreras and right-handed pitcher Jharrel Cotton from Triple-A St. Paul.

Contreras played 26 games for the Saints this season, scoring .239 runs with five home runs and 17 RBIs. Cotton made four relief performances for the saints, posting 2.08 epochs. He made up the Twins Opening Day roster and appeared in two games before being named for release or assignment on April 13.

Luis Arrez and Dylan Bundy are inching closer to a comeback as they were both cleared into the team on Tuesday after testing positive for COVID-19 on May 5. Arrez went through a workout before Tuesday’s game and Bundy threw as well. Tingler said Arrez is expected to return to action before Bundy, who needs to start rehab before pitching again.

Tingler added manager Rocco Baldelli, who tested positive for COVID-19 on the same day as Bundy and Arrez, is “feeling better” but still needs to test negative before returning.

Starting pitcher Bailey Ober (Kamar) threw an 18-pitch bullpen session on Saturday. Ober has been on the injured list since late April due to a right groin strain.

“I feel like I’m getting better every day,” Ober said. “I’m not back to 100 percent so I’m not trying to push it so I’m having a blowout or anything like that.”

Explainer: Why would Finland, Sweden joining NATO be a big deal?