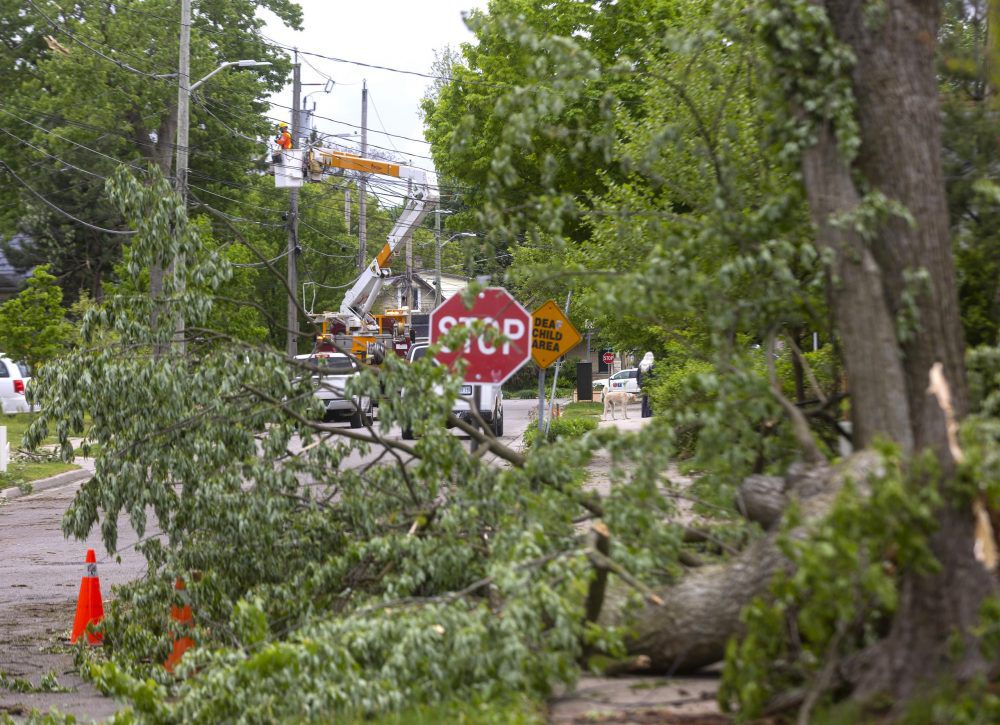 Western University researchers have confirmed that two tornadoes touched down in London last Saturday as part of the massive and deadly storm that blew through Southwestern Ontario.

Scientists with the Northern Tornadoes Project, which documents storms, on Friday said one landed in the northeastern Huron Heights area at 11:36 am The other hit the south end of the city, in the Wilton Grove neighbourhood, at 11:39 am

Both are classified as EF1 tornadoes on the enhanced Fujita scale, which goes from EF0 (the mildest) to EF5 (the most violent).

“They’re powerful enough to do some damage,” said Dave Sills, executive director of the project. “The one in Huron Heights took off some of the roof of an apartment building.”

The southern tornado packed winds of 185 kilometers an hour, the team of researchers found.

The twisters also uprooted and snapped large, healthy trees in the Forest City as they went along. The deaths of 10 people in Ontario and Quebec have been attributed to the powerful storm, some of whom were crushed by falling trees.

Read Also:  CVD-19 live updates report that 18 people have died and 61 have been admitted to new hospitals in Quebec

Sills says it’s “very lucky that no one got hurt” in London the same way.

The Huron Heights tornado had a path 450 meters wide that ran for 5.7 kilometers, NTP research indicates. It flipped over a plane and damaged a hangar. The Wilton Grove one had a path 400 meters wide running for 3.4 kilometers, researchers say, damaging a warehouse roof and causing the partial collapse of its wall.

Sill says both were part of a weather phenomenon called a derecho, which is a long-lived, fast-moving thunderstorm system that does widespread damage and can spawn tornadoes.

“We haven’t documented derechos for all that long,” Sill said, although there were some recorded in our region in the 1990s.

Last Saturday’s storm was also unusual in how it happened during the morning; Sills says thunderstorms in our region typically whip up in the afternoon hours, do damage during the dinner hour, then die down when the sun sets.

He says having a derecho in May indicates tornado season has begun in earnest this year, although the powerful storm doesn’t have any predictive value, Sills said. “I don’t think it portends anything for the season.”

Read Also:  Donors making a difference: funding a range of life-saving vaccinations for people of all ages

Sign up to receive a curated collection of links and highlights from our award-winning breaking news coverage, in-depth analysis and unmatched investigative features at lunchtime weekdays.

The next issue of LFP Noon News Roundup will soon be in your inbox.

USA Today Save Our Show poll results are out! ‘Magnum, Pi’ Lead