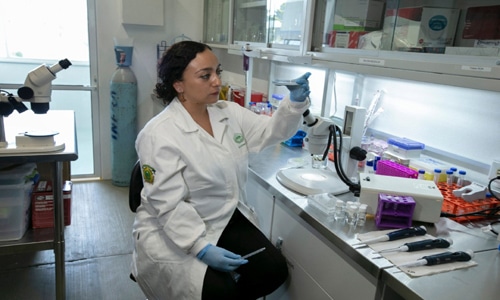 With the aim of promoting developmental biology in Mexico, Carla García Morales, a researcher at the Faculty of Science of the Autonomous University of the State of Mexico (UAEMEX), together with undergraduate degree students in biology, conducted the research project “Variety of Developmental Biology”. Determination of Fz7 expression at stages and during spinal cord regeneration in Danio rerio”.

Through her project, the researcher proposes the professional practice of the knowledge gained during her stay at the University of East Anglia in England, the application of molecular techniques, as well as the implementation of this discipline at the genetic level, teaching graduate students.

“It’s actually somewhat complicated because not many people work in developmental biology in Mexico and the reagents that are used are very difficult to obtain. So this field is expensive because it is molecular biology. Also Very few of my colleagues use it”, he remarked.

Supported by the Fund for Scientific Research and Technological Development of the State of Mexico “Women in Science” provided by the Mexican Council of Science and Technology (COMECyT), García Morales was able to detect the Fz7 gene using zebrafish as an animal model. tries (Danio rerio) and verify its relationship with the regeneration of its spinal cord. As such, these discoveries may provide a solution in the field of therapy for patients with paralysis caused by lesions in the nerve pathways of the spinal cord.

Frizzled 7 (Fz7) is a protein that crosses the cell membrane seven times and acts as a receptor in the signaling pathway called Wnt, which functions for both cell proliferation, differentiation and motility. There are different types of Frizzleds and Wnts, where each serves a specific function and can associate with each other in a number of ways, giving a specific signal to the cell.

“We wanted to see which cells specifically expressed zebrafish Fz7. If this molecule is essential for the cell in the event of spinal cord damage, it would have to be produced in high amounts and over-expression of Fz7 Should be”, explained the researcher.

The research proposal emerged when García Morales completed his doctorate in the United Kingdom using the frog Xenopus laevis, known as the African clawed frog, as a model to study the Fz7 and Fz9 genes. By injecting both genes into embryos and applying a technique to detect RNA with color reaction (in situ hybridization), they observed expansion in the spinal cord with the Fz7 gene, so they extended their studies to zebrafish (Danio). decided to implement. rerio), a species known for its ability to regenerate even at the adult stage, to verify whether Fz7 indeed played a relevant role.

The results so far of applying molecular techniques, such as RT-PCR for transcription of genetic information from RNA and PCR, to mimic a fragment of the chain of interest, have been mainly the expression of Fz7 at the embryonic stage. has been detected. zebrafish, while in the adult stage it is disappearing. However, the researcher comments that repeating the process is necessary to conclusively verify the results.

looking at the world through a microscope

His interest in developmental biology and molecular embryology began with his fondness for nature, and after witnessing the cloning of Dolly the sheep in 1996, he came to terms with the possibility of avoiding species extinction through genetic copies. While there, during his studies at UAEMEx’s Faculty of Science, he discovered the topic of developmental biology by a professor and a year later he completed his doctoral studies at the University of East Anglia, where he came across the animal model of the frog Xenopus laevis and Fetus. Of chicken

The researcher believes that many women enter different science degrees, but only at later stages, when participation declines because, unlike men, they have access to academic degrees, job opportunities, and a decent salary. And reaching even higher rankings has more barriers. Post.

To girls interested in developmental biology, Garcia Morales wants to send the message that science is universal and allows the discovery of unique phenomena that no one else has seen through a microscope, in addition to opening doors to any part of the world Is.