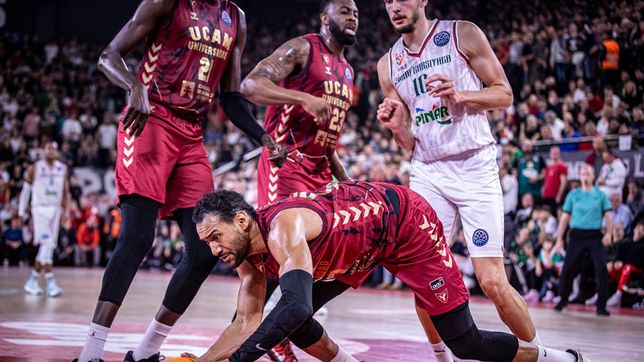 UCAM Murcia took a prestigious victory on the Pinar Karsiyaka track this Wednesday, where they kindled the Turkish passion and Sealed their qualification for the last 16 of the FIBA ​​Champions League by winning 89-96 In a game that turned into a spectacular last quarter with 17-33 in their favor.

The second match of the playoffs in the continental competition was faced by those from the capital of Segura, who had the advantage of the first played at home with a score of 97–92, but He needed one more win and aimed to get it without facing this opponent again at the Palacio de los Deportes.

The clash, with examples from the series held in 2018, was marked by extra-play with the introduction of goals on the track and even a fan’s aggression against Granas captain Sadiel Rojas, a somewhat rarefied atmosphere. started with what happened the day before, with Local supporters rioted at dawn next to the hotel where UCAM CB were staying and deflated balls with the local club Sito Alonso’s players to train on an auxiliary track in the pavilion and not on the main track as was required.

in that respect El Pinar takes an early lead in Karşıyaka Spor Salonu (12-5) And an exchange of baskets meant that the advantage more or less remained in the following minutes. However, the appearance of Nemanja Radović allowed Grana to take advantage for the first time in the match after 18–19. Two free throws by Elimane Diop that capped off an 0-7 run.

The first forced stop of the match was reached with parity (22-22) after the opening quarter, with UCAM CB showing strength to hold on Arion’s first rival and his passionate admirer.

The second quarter began with an offensive jam from both teams and the first to come out of it was the Spanish team, which Four-point lead after triple by James Anderson (30-34).

Perfect triple-three in a row-, Pinar returns to take command (39-37), Due to which Sito Alonso stopped the match with a timeout.

Eric McCollum led the Turk attack with 14 points. In the first half Joe was three goals up (50-47) with his team and UCAM CB faring better in attack than defense, though with a debt of lost balls—eight in the first two periods.

In any case, everything had to be restarted and resolved over there, After an early three-pointer that put Ufuk Sarika up six points (53–47) in the lead, came the Murcian response, notably starring Anderson, who threw Gallon (57–58). The varsity team more or less had the game where they wanted it at that point in the struggle and almost always having it in tow, but the 9-0 seemed like a stone’s throw away.

The inspiration to open the trench came from the Turks (66-58). Two three-pointers by Cannon Soldier made the run 15–2, putting the game away for good for the home team (72–60) in the final minute of the third quarter. Three free throws by Travis Trice stopped the bleeding and allowed the distance to be narrowed slightly and in the final ten minutes it was -9 for the University students (72–63).

The Spanish team continued its progress at the beginning of the final quarter and managed to enter the final five minutes very close to its opponent after a triple by David Jellinek (79–76). With 2 minutes and 27 remaining, another triple by Thad McFadden tied the game at 83 and Jellinek’s 3+1 shot made it 85–87 with 1:23 left.

Already at the last minute, Jellinek and Trice themselves, with two triples, fired at their team, which seemed to be a more difficult match than a victory. With a good collective game – six players coming in ten or more points – it was shown that stands help but do not win games.