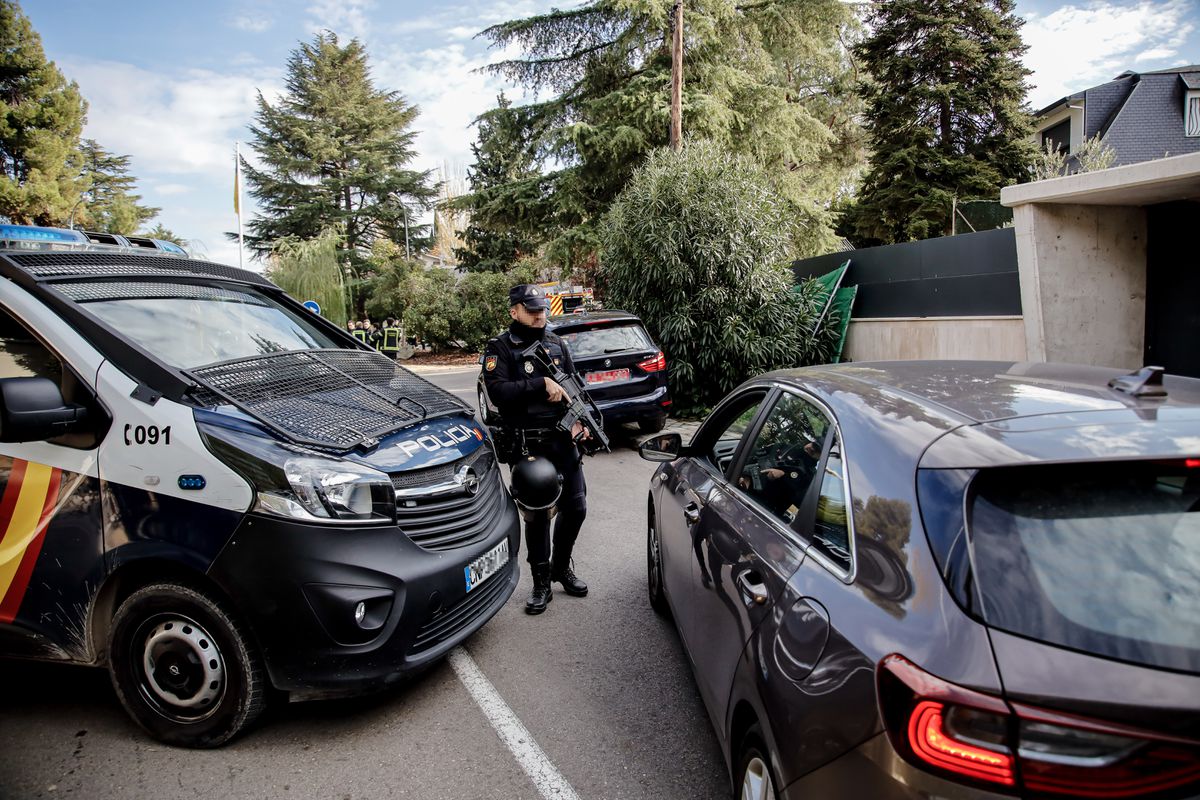 Just two days after a letter with pyrotechnic material arrived at the Ukrainian embassy in Spain and one of its workers suffered minor arm injuries, a new postal package raised the alarm at the eastern European country’s diplomatic legation in Madrid this Friday. Shortly after two o’clock in the afternoon, the National Police surrounded the building after the building’s security detected, among the mail, a suspicious letter with blood stains on the envelope. Experts who defused detonated explosives on the spot quickly confirmed that the shipment contained “neither mechanisms nor explosives or explosive substances”. What was inside it was the crushed eye of some animal. Specifically, a sheep, according to police sources.

Police believe the contents of the package and the fact that it was sent by mail from outside Spain rule out that the incident is related to six envelopes containing pyrotechnic materials that have been found in recent days at embassies, companies and are received in Spanish. institutions, among them the Embassy of Ukraine. The Ministry of the Interior links this shipment with other threats that have been intercepted at various Ukrainian embassies and consular offices in various European countries, where there were also blood stains and animal eyes.

This morning, Ukrainian Foreign Ministry spokesman Oleg Nikolaenko accurately reported that some of his diplomatic veterans on the continent had received a total of 10 similar threatening letters from a “European country”, none of which were specified. “The packages were wet with a liquid with a specific odor and had a definite stench. We are studying the meaning of these messages”, he elaborated. In particular, these packages have been received in Hungary, the Netherlands, Poland, Croatia, Italy, Austria at their embassies as well as consulates in Naples (Italy), Krakow (Poland) and Brno (Czech Republic).

Nikolaenko said in a Facebook message that, in addition, his country’s ambassador’s residence in the Vatican had been “ruined” with excrement, while the diplomatic representation in Kazakhstan had received an unconfirmed bomb threat. A shipment arrived at the legation in Washington with “a photocopy of an important article on Ukraine”. The minister, Dmytro Kuleba, has ordered all embassies and consulates to step up their security arrangements, assuring that attempts to intimidate Ukraine “are futile” due to “not being able to stop this on the diplomatic front”.

The new alert in Spain comes after it was learned that six envelopes of gunpowder and small pieces of shrapnel were sent to the United States embassies, as well as to Prime Minister Pedro Sánchez and Defense Minister Margarita Robles. Ukraine in Madrid, to an arms company based in Zaragoza and to the Torrejon de Ardoz Air Base (Madrid). On the same day, the interior ordered the National Police and Civil Guard to take extreme measures to protect public buildings, and especially to control postal items.

What affects the most is the close. To never miss anything, subscribe.

The six incidents are being investigated as crimes of terrorism in a case opened at the National Court last Wednesday. The interior minister, Fernando Grande-Marlasca, explains in a letter sent to other EU countries and the Schengen Area that the sending of these letters “could be related to the invasion of Ukraine by Russia”. However, the first police report sent by investigators to the court yesterday does not specify any hypothesis about the perpetrator.

with information from mariel delgado why Aliona Rakipz.