UN chief: The world more unpredictable than the Cold War 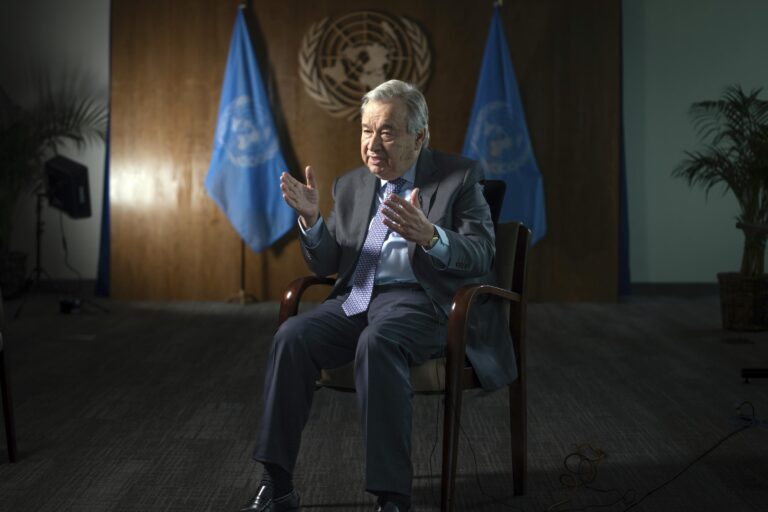 United Nations ( Associated Press) – UN Secretary-General Antonio Guterres said Friday that the current world is “much more chaotic, much less predictable” than it was during the Cold War between the former Soviet Union and the United States, and it is dangerous because No “tools” to deal with the crisis.

He told an extensive press conference that the Cold War was between two opposing factions where there were clear rules and mechanisms to prevent conflict. It “never got hot because there was a certain level of predictability,” he said.

He said he would not call today’s dangerous situation a Cold War or a Hot War, but perhaps “a new form of soft confrontation.”

Beginning his second term as UN Secretary-General, Guterres said in an Associated Press interview on Thursday that the world is in many ways worse than it was five years ago due to the COVID-19 pandemic, the climate crisis and geopolitical tensions. Is. Conflict has erupted everywhere – but unlike US President Joe Biden, he thinks Russia will not invade Ukraine.

At the press conference, Guterres said that his message to Russian President Vladimir Putin “is that there should be no military interference in Ukraine”.

“I believe this will not happen, and I strongly hope to be right,” he said.

The UN chief speaks after US Secretary of State Antony Blinken and Russian Foreign Minister Sergei Lavrov met in Geneva on the crisis over Ukraine, with Moscow deploying thousands of troops to its border and Western countries sending military hardware to Kiev . Success was little expected and there was none, but top American and Russian diplomats agreed to meet again.

“It is important for me that this dialogue leads to a good solution, and that good solution is to reduce tensions and end this crisis,” Guterres said. “That is our aim. I have been saying that I sincerely hope that diplomacy will win.”

Guterres reiterated in an Associated Press interview that the UN Security Council, which has the power to uphold international peace and security, including imposing sanctions and ordering military action, is divided, particularly its five veto-holding permanent members. Russia and China often differ with the United States, Britain and France on key issues, including new sanctions against North Korea on Thursday.

The Secretary-General reiterated at the news conference that dividing the world into two halves – with the United States and China creating rival economic systems and rules, each of which is the dominant currency, with its own internet, technological strategy and artificial intelligence – should be avoided. “At all costs.”

He said his aim is to enable the two major economic powers to “remove those difficulties and establish a global market in which all can cooperate and all benefit.”

Guterres spoke to reporters after presenting their priorities for 2022 and assessing the global scenario to diplomats from 193 UN member states at the General Assembly, which he called “not a pretty picture”.

“I see a five alarm global fire,” said the Secretary-General.

“Each alarm is feeding the others,” he said. “They’re an accelerator of hell.”

He cited inequality and injustice in his handling of the COVID-19 pandemic, “a global economic system against the poor,” inadequate action on the “existential climate threat” and “a Wild West digital frontier to profit from the division.”

Guterres said all these “social and economic fires” are causing conflict and unrest around the world, and they are all fueling mistrust and people’s lost faith in institutions and their underlying values.

“In every corner of the world, we see this erosion of core values. Equality. Justice. Cooperation. Dialogue. Mutual respect,” said the secretary general.

He warned that injustice, inequality, mistrust, racism and discrimination are “casting a specter in every society” and that all nations must restore “human dignity and human decency” and “stop the death of truth.”

“We must lie again,” Guterres said.