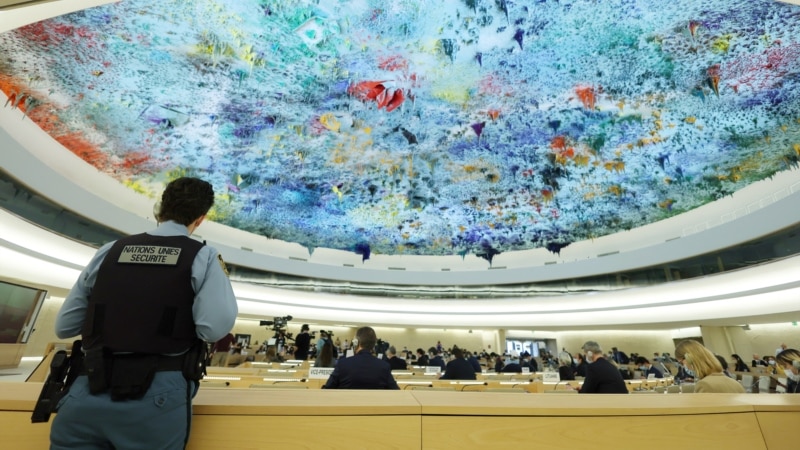 The UN Human Rights Council adopted the resolution by a vote of 32 in favor, 13 abstentions and two against. Only Russia and Eritrea voted no to condemning Russia’s invasion of Ukraine.

In an indication of how isolated Russia has become, even stalwart allies — China, Cuba, and Venezuela — chose to abstain rather than stand shoulder to shoulder with Moscow in rejecting the resolution.

While Belarus is not a member of the council, it took the floor in defense of its Russian ally. Belarus Counselor Andrei Taranda also took the occasion to deflect criticism against his country’s alliance with Moscow.

“A number of Western countries condemned Belarus for, as they put it, supporting the aggression against Ukraine. But let us be honest with ourselves. Who is fueling the flames of conflict in Ukraine? Unlike the co-sponsors of the resolution, Belarus is not sending weapons or mercenaries to the conflict zone. And there are no Belarusian soldiers on Ukrainian soil,” said Taranda, speaking through an interpreter.

The claim that no Belarusian soldiers are in Ukraine cannot be independently confirmed.

The Belarusian statement had little traction in the council. Country after country from all regions of the world — Europe, Africa, Asia, South America — rose to condemn Russia’s aggression in Ukraine.

Ambassador Sheba Crocker, US representative to the UN and other international organizations in Geneva, said Russia must be held to account for its senseless, premeditated and unprovoked military attack on Ukraine.

“With millions of civilian lives at stake, Ukrainian and non-Ukrainian alike — as Russian troops open fire on the streets of Kyiv, as they drop bombs on residential buildings in populated areas, as they shell kindergarten students in their schools — Russia must be held to account by this council,” Crocker said.

The Human Rights Council resolution calls on the commission of inquiry to investigate all alleged violations and abuses of human rights stemming from Russia’s invasion of Ukraine. It charges the commission to collect, analyze, and safeguard all evidence to be used in any future legal proceedings that may result from its probe.