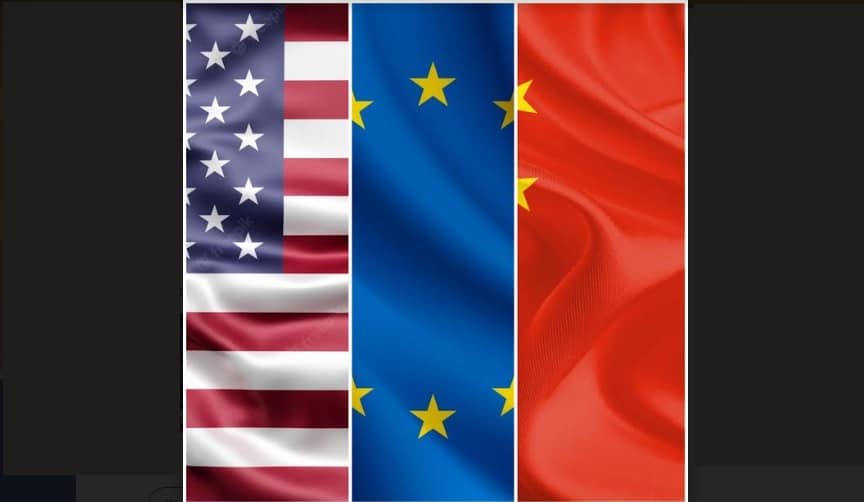 Biden’s trip to Mexico for a meeting of North American leaders came amid a scandal that surfaced during that trip.

You know, even if we don’t like it, everything that happens in America affects us more than any other country in the world, and whether they like it or not, our neighborhood is the most important but most low value relationship.

The leaders’ meeting made common and expected joint declarations which are summarized in this edition in six points: competitiveness and economic growth; clean energy economies and climate change; travel; Strategies to combat human and drug trafficking and strategies to protect ourselves from current and future health crises such as covid19 and inclusive strategies for the community called LGBTI and gender discrimination.

Within these six points there are many very interesting issues that will definitely affect the near future of our country and region. We will leave for later equally important things that were not said in the meetings, including possible coincidences.

A strategy was agreed upon to identify strategic mineral materials for renewable energy and create a common database. In other words, the US wants to know how much rare earth, lithium and other similar minerals are in Mexico because Canada and the US have very good databases on these issues and they are public. Naturally our country has a huge amount of these strategic minerals and at the same time it does not have the infrastructure to exploit them, let alone replace them. From an economic perspective, this may be the most important issue that Biden and AMLO addressed, with Secretary of the Economy Raquel Buenrostro, who will have to address the issue.

Also interesting is the strategy to strengthen the production chain of essential commodities for the energy transition from fossil to renewable energy. This will be very important, starting with the idea of ​​being able to ensure that there is a network of stations in the border area to charge the electric vehicles of the wealthy Mexicans and Americans who visit our border area. Naturally with the idea of ​​being able to manufacture parts for semiconductors and other pieces of high tech value for the digital age and renewable energy.

On the migration side, the truth is that it remains an embarrassment and a disaster for the personal safety standards of the millions of migrants who are displaced around the world by these failed policies and poor economic conditions. United States of America through our national territory. These two years for our border cities have been the worst in migrant pressure in the history of our neighborhoods. As we warned two years ago in March 2021, this will be the biggest migration in modern human history. To this day, the President of the United States himself has acknowledged in his message from the National Palace that this is the largest mobilization since World War II.

If the US and Mexico agree, the reality of our country will change and the situation on the shared border will be much better, but it seems that neither they nor we want to overcome the challenges of the region for ideological and political reasons. To be. common good and we are satisfied with the free traffic of all kinds of goods, legal and illegal, and within them we classify people.

The idea of ​​the meeting was to use the pretext of the Northern Hemisphere Alliance to rekindle Biden’s relationship with AMLO. this is true. Let’s remember that AMLO gambled with Trump, just as Salinas gambled with Bush, and both lost.

Biden arrived at CDMX from a trip to the border between Texas and Chihuahua. To that end, he presented an app for migrants to apply for political asylum from their countries “via cell phone”. Obviously this will not reduce the interest of migrants to go, in fact, it will increase because if you apply to that process they will give you what they call “parole” which is a permit to work and be able and A type of social security. To hold temporary documents in the United States.

The program is similar to the Dreamers that Obama opened in favor of minors who, having arrived in the US as minors, could have temporary documents to be able to live a normal life in that country while the government offered an amnesty. In short, this Dreamers-like program is a mini-apology, which will be another argument of the same kind in the long run.

Biden also came to claim his present in the so-called fight against drug trafficking, thanks to the arrests of Chapo’s son and Mencho’s nephew at that meeting. Biden accused Mexican cartels of being co-responsible for the deaths of more than 108,000 Americans in 2022 from overdoses of fentanyl from China through Mexican cartels.

AMLO slammed the US for neglecting development issues in the region, but Biden reminded him that he supports the entire world and the Latin American region is no exception. AMLO swallows the contradiction and incidentally thanks him for not continuing with the construction of the border wall, which is ironic since a significant amount of illegal traffic of all kinds passes through those holes.

There has been talk of a program to reduce food waste, which is very positive because as we wrote in this space 3 years ago, it is one of the worst crimes against the environment and the world economy. Lastly, there was also talk about TMEC panels which, as you know, will have their next peak moment in a few weeks. The hot topic is electricity and fossil fuels.

There were interesting and positive topics that would bring us good economic results if we knew how to take advantage of them, but there were also topics that were not discussed or touched upon and published.

Topics such as Fast and Furious, a program through which the Obama and Biden administrations sent weapons to cartels in Mexico, the fight against alleged corruption of military and national security officials such as General Cienfuegos and former Security Secretary Genaro García Luna were among the non-public agenda. Was part of secret affairs. Speaking of which, our Attorney General didn’t attend the initial meeting because he was too busy at home, being late for other events, is that what he wanted to tell himself?

With regard to the immigration issue, it was ignored that US border policy is expected to cause more than 5.3 million people of 160 nationalities to cross through Mexico without documents into that country from 2021 to 2022. Pays an average of 6 thousand dollars per person to the cartel. They control the routes and have had their most profitable years, they also bring in drugs that the US says it wants to stop and weapons that Mexico says it wants to stop.

The trip brought bad luck for Biden when, on the day he arrived in Mexico, it was published that he withheld without authorization various documents that were classified from when he was vice president with Obama, who was visiting his home. Will be located in different parts of the U.S. and their office at the University of Pennsylvania.

He had not finished opening his bag when he was informed on Wednesday morning that all the sky was closed in the United States. 100% of air operations in his country were suspended due to a “glitch” in the computers. More than 8,000 flights were delayed for several hours and more than 1,200 were canceled permanently.

The world had not seen anything like this since the attack on the Twin Towers in New York. Hours later, it was revealed that the one thousand three hundred million dollars that the US announced it would invest in infrastructure modernization from 2021 were not applied to improving the flight systems used by that country’s control towers. Was. Those delays caused billions of dollars in losses for the USMCA’s three countries and Europe.

To end this, on Thursday the US Attorney General announced the creation of a special prosecutor’s office to investigate President Biden’s three sets of secret papers that he took to his home and office when he was Vice President and never came back. This may be complicated because one of the offices where the papers were located is the University of Pennsylvania, which has received over $50 million in donations from the Chinese government over the past 3 years.

For the first time in the history of the United States, the current president and his predecessor are both under criminal investigation for the same crime, making them natural candidates for 2024. What 2023 holds for us! When Trump’s affair came to light weeks before the 2022 midterm elections, Biden tore him to pieces “… how could this happen? How could someone be so irresponsible? What was he thinking? … What will the one who now talks about his own scam say?

AMLO has resolved differences with Biden by hook or by crook, but a new crisis looms in the relationship as the future of the two candidates with whom AMLO has secured a rapport now appears to be in the hands of lawyers. If the special prosecutor in charge of the Trump case decides to censure the former president, it will make it very difficult for him to run a successful campaign, which, for his part, is still under investigation, which Biden will not be able to do. may be compelled. The candidate may even end his term if the prosecutor in charge of his case decides to censure him so that Kamala can pardon him as president.

In one of these, both have been acquitted or both may be prosecuted despite having documents designated as top secret. Who would have thought? Biden and Trump in the same boat. If Trump consents, it will be difficult for Biden to be allowed to run for re-election in 2024 and vice versa, if Biden is pardoned, he will have to do the same to Trump. After all it is the same crime and Biden had six years of documents in incredible places. It should be remembered that Hillary Clinton took the secret to her home on a computer server and when the FBI arrived they found nothing because the memory on said devices had been erased.

AMLO is right, it will change everything if the President of the United States decides to support the economic development of the region in a decisive way, but unfortunately for the two ruling parties in the United States, Latin America is a backyard whose Used to win votes. , for economic work inside and outside its borders and for what is offered.

American citizens also suffer from a lack of respect for the region but there is little they can do as both parties are getting away with the disaster and truth be told Mexican politicians are getting away with the issue too or so we believe That the issue of drug trafficking everything that is illegally trafficked is a matter of only one country? Of course not! But for now we’ll see if Biden remembers the deals he made at CDMX as he must now prevent his own party from sacrificing itself in the quest to eliminate Trump.