Unfair, Underpaid, and Free: My View of Internships and Working on Professional Sports Teams

It has been eight months since I joined Chicago Fire FC as President of Business Operations. While I was running day-to-day duties in the front office, one thing was clear on this side of the sports world: interns were not getting paid, entry-level salaries were unfair, and diversity was lacking.

From my first day at the club on June 1, 2021, I wanted to change a lot, but I wanted to start with the basics of retaining and achieving the best in the business to work in our front office. However, for this the culture had to change. Sure, interns are now paid for us, and I’ll talk about that later, but now we’ve also changed our maternity leave, parental leave, and family leave to provide real time at home to be with family. All new parents receive eight weeks of paid leave, and new mothers receive an additional six to eight weeks for a total of 14 to 16 weeks of paid leave. In addition, we have launched family leave – six weeks of paid leave – for those who may need to take care of loved ones. To further add value to the club’s staff and attract top talent to us, not only have we raised the wages of our ticket sales staff, but every full-time employee is now eligible for a potential year-end bonus based on performance. Again, my goal is to maintain and achieve better business results so that the Fire front office becomes a place where people want to work and continue to grow in their careers. This includes first-team and Academy players who can explore off-field career options by taking part in a front office mentorship program that can help them stay engaged in the game beyond their playing career. Doing the right thing isn’t hard, and what organizations currently provide for entry-level employees and interns is the bare minimum. We need to make changes because we are losing great future leaders because of these situations. 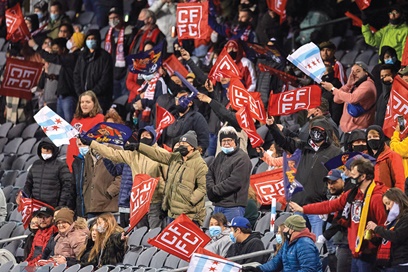 Chicago Fire FC pays all of its trainees and has improved its family leave policy.getty images

When I was hired, it was breaking news that Fire had hired a new president, but it was on the front pages because I’m a woman in that role. While I’m proud to be in this position and have earned the right to be here, it shouldn’t be that hard for a diverse candidate to reach this point in their career either.

A longstanding debate in every industry is unpaid internships. But why is this even a discussion? While I’m proud to say that we now pay all trainees at the club, this is not something to brag about as this is something that should happen in every professional organization. Most students simply cannot afford unpaid internships, and in turn, we are seeing more students and recent graduates from higher socioeconomic backgrounds gain experience and in turn get hired full-time. We’re really just continuing the trend of income inequality and diversity in our industry due to this cycle, and as a female CEO, I’m here to tell you that is complete bullshit.

From the very beginning of the internship, the student has an edge at the door and makes connections for future work in the organization or future teams in which he works. This system is flawed because not only does it prevent less affluent students from gaining experience during that time, it also sets them back severely once they graduate and start their careers.

Till the entire industry is suffering from a lack of diversity, I truly believe that eliminating unpaid internships will help address the imbalance we are currently seeing. Plus, it’s the damn right thing to do, and in many cases doing the right thing isn’t easy at all. But in this case it is.

Ishwara Glassman Crane is President of Business Operations for the Chicago Fire Football Club in Major League Soccer. Prior to joining Fire, she was head of sports partnerships and business development at Yahoo Sports/Verizon Media. She is also a member of the Sports Business Journal’s 2020 Forty Under 40 class.

Have questions about OPED recommendations or letters to the editor? Email Editor Jake Kyler at [email protected]